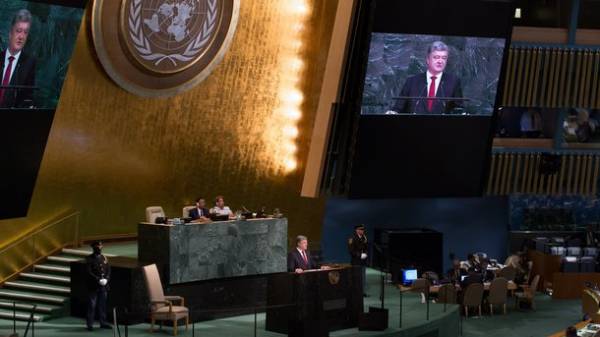 Week large international events — in a nutshell you can describe the past seven days. In addition, all internal events are lost, even despite the fact that the Parliament was session week.

PEACEKEEPERS. Starting Monday the center of attention of Ukraine (and the rest of the world) was a different session of the UN General Assembly. Annual meeting of the heads of two hundred countries was extraordinary, if only because it discussed the issue of reforming the main world body. But for Ukraine it was important, primarily because it was first actively discussed the issue of introducing a peacekeeping mission in the Donbass. Our President devoted a considerable part of his speech at the General Assembly and the entire speech in the UN security Council. However, the specific plan has not yet been announced.

In the last days have stalled because of the Kremlin — the Minister of foreign Affairs of Russia in conversation with the U.S. Secretary of state said that Moscow supports the idea of peacekeepers will provide security of the OSCE mission. And this is a step backwards in comparison with previous statements.

NATO. Peacekeeping mission in Eastern Ukraine was the main theme and was held in Kiev in the annual YES summit (“Yalta European strategy”), organized by the Victor Pinchuk Foundation. And it suggested that the issue is far from resolved — because the accommodation options offered peacekeepers were sometimes diametrically opposed.

However, the main conclusion is still that the peacekeepers need. Because the US special envoy for Donbass Kurt Volker said that Ukraine is still not ready to join NATO. Accordingly, because we cannot count on the support of the North Atlantic Alliance, the world can only be achieved with the help of the UN and the OSCE.

DONBASS. The question of peacekeepers hung in the air bill on the reintegration of Donbass, which since July is announced as a document that will help to establish peace and to regain the lost territory.

Within two months of it were contradictory rumors. And here recently the Vice-speaker of the Verkhovna Rada Oksana Syroid presented several abstracts from the transitional provisions of the bill. According to her, the project envisages the introduction of special status for Donbas, the law which passed in 2014, but still not working. Also, these same transitional provisions contain the right of the President to impose martial law and to suspend the powers of local authorities in any region of the country. If all of these provisions remain in the bill when it finally will bring to Parliament, where it will be a very difficult discussion.

INFLATION. And while the deputies are waiting for the consideration of a very difficult draft budget for 2018. On Monday, he appeared in Parliament and has been subject to massive criticism. Critics can understand if the week before all outraged information on annual average dollar exchange rate hryvnia to 29.3, the draft budget was that by the end of 2018 and is expected to 30.1 UAH/USD.

These figures mean that over the next 15 months of the hryvnia to depreciate by almost 15% against the current rate.

But in the draft budget 2018 laid a total of 7% of inflation. That is, the planned rate of low twice. There is no doubt that the deputies of this contradiction.

BONDS. Most likely, deputies will not forget and about the information of the Ministry of Finance about the fact that Ukraine placed Eurobonds for $3 billion under 7,375% per annum for 15 years. Although these figures were presented almost as an achievement, a reason for joy here a little. The infamous loan of $3 billion, which is in the form of Eurobonds purchased by Russia in 2013, was brought under 5%. Russia itself has recently placed its Eurobonds under 4.2%. And even Honduras its ten-year bond sells at 6.25% per annum. We are on the same level with Tajikistan, bonds of which take under 7,125%.

LANGUAGES. MPs need to think over how to resolve the conflict, which is their fault arose in the country with almost all the neighbors. It is all about the same education act, which forbade (2018 in part, from 2020 in full) to study in schools in minority languages.

On Tuesday, the speaker of the Verkhovna Rada passed the adopted law to the President for signature. Meanwhile, two Parliament — Hungarian and Romanian — adopted resolutions condemning the violation of Ukraine’s commitments to the European Union.

Is out of the conflict to a new level as a week ago the appeals to the Ukrainian government was at the level of foreign Ministers. And at the level of the foreign Ministry issue raised, from six countries — Hungary, Romania, Poland, Russia, Greece and Bulgaria. So, after for these two parliaments to rebel can.

The head of our foreign Minister Pavlo Klimkin has promised that the law will be submitted for examination to the Council of Europe. 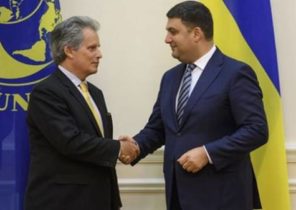