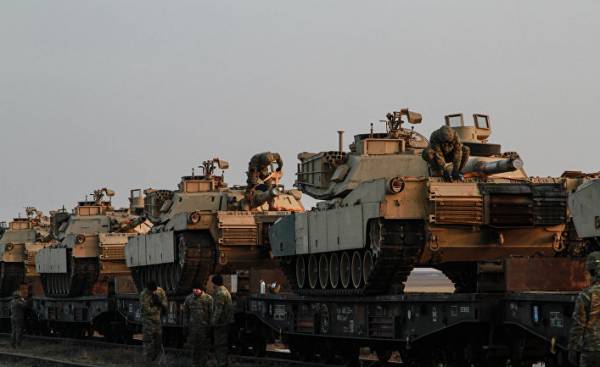 How dangerous for US and NATO created in Russia, the fighter invisible fifth generation, as well as its nuclear Arsenal is modern and high-tech air defense, anti-satellite weapons, ground troops and submarine fleet?

Emerged between Russia and NATO tension leads many experts to carefully analyze this issue and also examine the current state of the Russian army, her armament and technical achievements. This is done in order to better understand the nature of the threats that can create Russia.

Naturally, the Russian military maneuvers and annexation of the Crimean Peninsula has led many analysts from the Pentagon to study and evaluate the modernization of the armed forces and state troops, equipment and weapons of the military giant of the cold war.

Russia clearly wants to show that she is able to counterbalance and keep the Alliance. However, some researchers of the Russian army and its current state doubt the ability of Russian to create real problems for NATO in the course of a long and large-scale military action.

However, Russia achieves new successes in the military field, and many experts and analysts from the Pentagon expressing concern about the placement of NATO forces in Eastern Europe and I doubt that their will be enough to keep Russia from possible invasion in the region.

Furthermore, provided Russia economic pressures have not stopped the rapid process of modernization of the armed forces. Moscow increases its military budget, despite the fact that her army of today is only a small part of what had the Soviet Union at the height of the cold war in the 1980-ies.

Territory and length of borders of this former giant of the cold war has significantly decreased in comparison with 1980-mi for years, however, Russian ground, air and naval forces are trying to develop rapidly, moving to a higher technological level and combat persistently develop the next-generation platform.

Conventional and nuclear Arsenal of Russia is only a small part of what she had in the years of the cold war, but Moscow has created new submarines with airindependent power plant, a stealth fighter T-50, a new generation of missiles, and modern individual weapons and equipment for soldiers of the army.

Analytical center of The National Interest has recently published a series of posts about the technical achievements of the Russian military designers. There is information about the new anti-satellite weapons, on tanks T-14 “Armata”, on defenses, on preliminary plans to create a hypersonic fighter of the sixth generation, and much more. Russia clearly is focusing on the modernization of its armed forces and has achieved considerable success in this area, according to the The National Interest and other publications.

“This is the second test of a new weapon that can destroy satellites in space. Obviously, the start was made from the Plesetsk cosmodrome, located to the North from Moscow”, — stated in the message of The National Interest.

In addition, the editor of this edition, Dave Majumdar (Dave Majumdar) wrote that the Russian airborne troops are planning to form six tank companies, which will be equipped with a modified T-72Б3М. Within two years these companies will be reported to battalion staff.

During the cold war, Russia’s military budget accounted for nearly half of the total amount of its expenditures.

Today military spending represent a smaller proportion of the expenditure part of the Russian budget. But despite the vast differences in comparison with 1980-mi for years, the Russian military budget is again increasing. From 2006 to 2009 it increased from 25 to 50 billion dollars, as reported by Business Insider. And in 2013 it amounted to 90 billion.

In General, during the cold war, non-nuclear forces of Russia in its size was about five times more than today.

According to reports globalfirepower.com in 2013 the number of personnel on active duty totaled 766 nsczx people, and the reserve was 2.4 million. During the cold war, the Russian army there were three to four million people.

According to the same estimates for 2013, in the armed forces of Russia there are more than three thousand aircraft and 973 helicopters. On land, Russia 15 thousand tanks, 27 thousand armored combat vehicles and nearly six thousand self-propelled artillery. Of course, in numbers, the Russian army is much smaller than during the cold war, however, it is making significant efforts to upgrade and maintain in fighting condition its mechanical devices and platforms. T-72 tank, for example, since its creation in the 1970-ies has undergone many upgrades and improvements.

As for Russian Navy, globalfirepower.com assesses his combat power at 352 ship. Among them one aircraft carrier, 13 destroyers and 63 submarines. The black sea is a strategically important area for Russia in economic and geopolitical terms, as it gives her a way out in the Mediterranean.

Analysts also noted that in 80-e years the Russian armed forces had made huge number of conventional and nuclear weapons, ranging from rockets and missiles, and ending with effective air defenses.

According to experts, the missiles s-300 and s-400 is particularly effective when thorough maintenance and upgrades.

Citing Russian media, The National Interest reports that the Russians are currently experiencing a new anti-aircraft missile system s-500, capable of hitting targets up to 200 kilometers.

In the sky at the Russian fly created in 1980-ies of the su-27, which are utilized almost in all strategic directions.

Su-27 is often compared with the American F-15 Eagle. The Russian machine is equipped with two engines, it has high maneuverability and is mainly intended for superiority in the air.

Although many experts argue that NATO due to troop numbers, firepower, air superiority and technology in the course of large-scale hostilities will eventually win over Russia, this does not refute the findings of a study conducted by the nonprofit organization RAND, which was published last year. It says that NATO will be in an extremely difficult position if Russia carried out the invasion of the Baltic countries.

The organizational structure of the armed forces of NATO in Eastern Europe will not provide a decisive rebuff Russian aggressors in the case of the invasion of Moscow in neighboring Latvia, Lithuania and Estonia, according to the conclusions of the RAND.

After a series of war games in which the “Reds” (Russian troops) and “blue” (NATO forces) were fighting in a variety of scenarios in the theatre of the Baltic countries, RAND, in its report “Strengthening deterrence on NATO’s Eastern flank” (Reinforcing deterrence on NATO’s eastern flank) concluded that for a successful defense of this region, NATO will need much more aircraft and ground troops than deployed there currently.

In particular, the authors of the study encourage NATO to develop a strategy similar to the concept of air-land operations, which was created in 1980-ies the height of the cold war. At that time in Europe was a group of American army numbering several hundred thousand people. Its purpose was to deter a possible Russian invasion. The us military said Scout Warrior that in Europe today only 30 thousand US servicemen.

The RAND study stated that if NATO does not create to protect Eastern European deterrent force consisting of at least seven teams with the relevant fire and air support, Russia will be able to capture the Baltic countries in just 60 hours.

“In the current state NATO is not able successfully to defend the territory of their most vulnerable members. Numerous war games involving many different military and civilian experts convincingly showed that the Russian troops will need 60 hours to reach the Estonian capital of Tallinn and in Riga, Latvia. After such a rapid defeat of NATO will be very little options,” — said in the RAND study.

The concept of air-land operations, which was used by the Americans and their NATO allies during the cold war, among other things included a clear interaction between large and highly mobile battle groups of mechanized ground troops and attack aircraft. Under this concept the air strikes at the logistics facilities logistics was to weaken the enemy and advanced means of fire support. As a result of such air-land interaction large ground connection can easily move forward, broke through the first line of defence of the enemy.

In the case of the onslaught of Russian in the Baltic States, NATO will be very few available options. Among them are massive, but risky counter-attack, the threat of use of nuclear weapons, or simply weak-willed consent to the Russian annexation of these countries.

The study addresses one of response options and mentions that will need a lot of time to prepare and conduct a massive counter-offensive, which will likely lead to a protracted battle with heavy losses. Another option is the threat of use of nuclear weapons. But it is unlikely, if not completely unrealistic in the light of American strategy for the reduction of nuclear arsenals and their unwillingness to use nuclear weapons, the study said.

The study outlines specific actions to be taken to create a reliable and effective deterrent force.

“War games indicate that the force of seven brigades of constant readiness, including three tank brigades, with air support, artillery and other ground-based firepower will be enough to prevent the rapid seizure of the Baltic States”, — noted the authors.

Examined in the course of war games, different scenarios, the participants concluded that in the absence of a larger defensive mechanized forces of resistance, NATO will be quickly broken.

“The American units there is no air defense in the middle of the action, and in the other NATO troops present in minimum quantity. This means that the resistance during the enemy offensive will have only a duty aviation carrying out combat patrols, which will be destroyed because of the numerical superiority of enemy aircraft. The result of the war game in such a scenario became severe losses “blue” and the inability to hold the offensive”, — stated in the conclusions of the RAND.

Latvia, Lithuania and Estonia will probably become the first target for Russia, because they are all in the immediate vicinity, and for many years was part of the Soviet Union, the authors say.

The study says that the extra teams is expensive, but essential for NATO.

For the creation of three completely new armored brigade combat teams the US army will need a lot of money. In General, it will cost about $ 13 billion, taking into account fighting vehicles, artillery, air defense and support units and security. But much of this equipment, in particular, dear tanks “Abrams” and fighting vehicles “Bradley”, already available.

The actual number of NATO troops in Eastern Europe not yet fully defined, and under the new administration, it may change. But NATO and the United States for quite a long time thinking about sending additional forces and resources on the Eastern flank in order to more reliable containment of Russia.

At the same time, the Initiative on European security, the implementation of which the Pentagon requested $ 3.4 billion, provides for an increase in troops in Europe, and the creation of “good stocks”, the arsenals of firepower and “staff support” of NATO forces.

Members of the American forces in Europe told Scout Warrior that planned new doctrines of solidarity with NATO allies, and that the number of personnel can also be increased.

For example, from 27 may to 26 June last year, NATO conducted in Poland and Germany exercises “Rapid response-16” (Swift Response 16), which was attended by over five thousand troops from the U.S., Belgium, France, Germany, Britain, Italy, the Netherlands, Poland, Portugal and Spain.