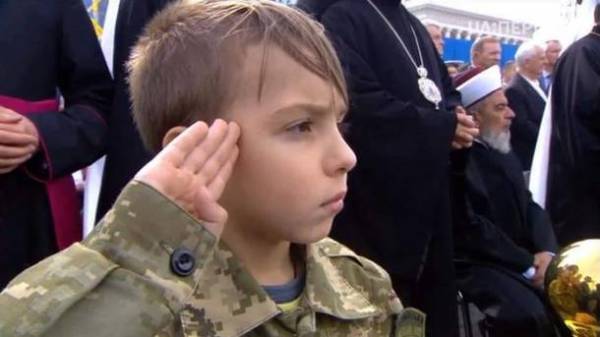 Ukrainian and world media paid attention to the boy, who saluted in the form of in the VIP sector during the parade on the occasion of independence Day on Thursday, August 24. They found Matthew Woodrow Wilson – the grandson of the actress, Hero of Ukraine Ada Rogovtseva. This was reported by a user of the social networks under the name Mariasha lexi on his page on Facebook, saw the picture of Matthew in the media, – writes the Internet-the edition “Public People”.

“Well what can we say, our Matthew on all pages in all foreign publications and all foreign channels! Its form is new, bought at his request, as he is a child of Ukrainian heroes, patriots loves and respects more than a variety of cartoon images,” she wrote.

He adds that the grandson of Ada Rogovtseva “loves the Cossacks, and by sabres almost asleep.”

“Meet Matthew Sklyarenko! Whose father stood near Lviv Brahma in the heady days of February, and my mother was cleaning the house after the Ukrainian “Berkut”, and this despite the fact that they are people of the theatrical profession! His brilliant grandmother no words at all! Take Ukraine, my hero – Matthew A.! The future General of the armed forces of Ukraine”, – said Mariasha lexi.

Another photo with the hero parade Matthew Woodrow Wilson and his grandmother Ada Rogovtseva released in Facebook, the first Deputy Chairman of the Verkhovna Rada Iryna Gerashchenko. We will remind, on August 24 in Kiev held a military parade, which was attended by 4.5 thousand Ukrainian military, including members of anti-terrorist operation on Donbass. For the first time in history the parade was attended by soldiers from NATO countries.