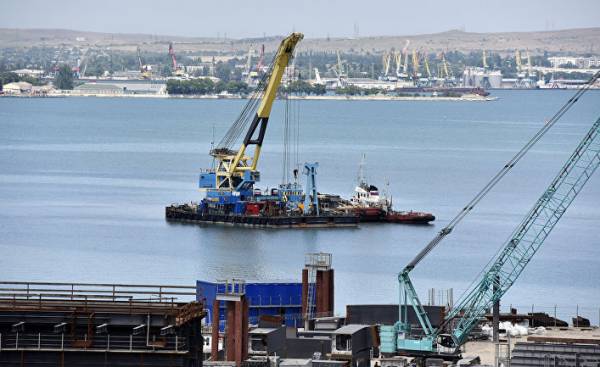 “Browser”: When you were in the US in the Ukrainian delegation headed by the President of Ukraine, you had talks about the arrival of U.S. port operators in Ukraine…

Vladimir Omelian: Yes, it was announced by me. The American side proposed that the two companies that may consider Ukraine. Now we are in the negotiation process, and I hope that it will be successfully completed. I wish we had three of the advanced countries and regions of the world — USA, China (Hutchison Ports), the Arab world (Dubai Port (DP World).

— What do you think about the bridge? Because Russia is going to shut down because of it in August, the passage in a number of Ukrainian ports for the ships through the Kerch Strait and then to limit this movement. How Ukraine to win in this situation?

— We appeal to the international court for this reason. This is another flagrant violation of international law, the laws of Ukraine from the Russian Federation. In connection with the recent statements of Moscow about the restrictions on the movement of the Strait, the planned strengthening of such work at the international level.

— How do you feel about the complete blocking of transport links with the occupied Crimea and Donbas?

I supported it, and much has been done also at our initiative. In particular, the aircraft message — it was our initiative — we closed, despite all the stories and “horror stories”, that would be bad. We stopped railway passenger and cargo transportation to Crimea and occupied Donbas. I believe that there is nothing to go there. There is nothing to go to Russia, actually. But to visit family who have it there. If we go to Europe we should go to Europe.

Russian media reported that Ukrainian tourists are literally crammed in there, to the occupied Crimea. What is your information about this?

Laughs and include a web camera Crimean beaches, if on the Ukrainian Peninsula have electricity. They are empty! Even according to the occupation authorities, the percentage of Ukrainians who went to rest in the Crimea this year — less than 5% of the total number of tourists there standardfederal. I think that was a strategic mistake one time, when we allowed the Russian pensioners and other Russians stay in Crimea, to live and to get a Russian pension on the Ukrainian territory. And it is this “Golota” fulfilled the instructions of the Kremlin’s annexation of Crimea. I see that the Ukrainians are traveling a lot more and certainly not in the Crimea.

— What are the European direction? Did the conduct bezveza on the increase and the demand for travel to Europe?

Is what we have said always is that people will go, they need to create for this condition. Bezviz is a huge step forward and great merit of the President of Ukraine.

— How to revive the demand and interest?

— I would say that at times. 162 thousand Ukrainians used the right of visa-free entry into the EU. This is a big number. In fact, why are we also fighting for Ryanair — that Ukrainians traveled in buses, minibuses or trains, or private cars without standing in the queues and had the option cheap and quick moving.

According to our statistics, 70% of people have used different types of transport: car, bus, train and only 30% flew. All other transport is like 50-60 more, and sometimes 100 euros. A plane ticket would cost 30-40 euros. Since September, it would be possible to fly to 4 destinations in Europe and next year in dozens of destinations in Europe from Kiev. This is what we seek.

A global concern — we’re losing manpower. And it should also be a very clear signal to the government, we must change the situation in Ukraine. To Ukrainians left in Ukraine and was satisfied with my stay here, work, school, level medicine. People go to work in another country mainly through poverty and the inability to realize themselves at home. Bezviz also opens a door to it. The first time people can go to see and return with forces to reform Ukraine. And someone then decides to go abroad to work.

The request of Ukrainians in Poland, Slovakia, Romania, the Baltic States and others. Gone are the days when the Ukrainians had to settle illegal immigrants. Now big companies offer firm contracts to qualified Ukrainians in year 2, by 5, with fixed high salaries. That’s why we lose people: they go some of the best and one of the most professional. Just like the good ones on the front, and the best will go to other countries. And we lose effective human capital is a very serious challenge. If emigrants from Poland, Slovakia, Hungary, Baltic States, Britain, Germany, the United States replaced the Ukrainians, then Ukrainians in Ukraine there is nobody to replace.