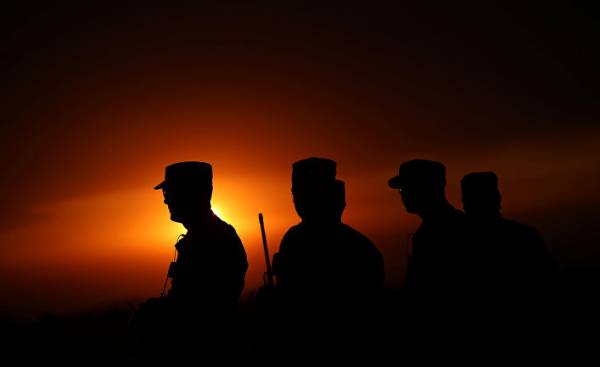 POLYGON NOVO SELO, BULGARIA — After a decade on the fight against Islamic militants in Iraq and Afghanistan, the US army is struggling to restore the skills of the cold war to counter potential threats from Russia here in Eastern Europe — a territory formerly under the protection of the Soviet army.

Improvements in the context of the new threats is very significant. Hundreds of yellowish-brown battle tanks and armoured vehicles should be repainted in dark green to help them blend in with the features of the European area. The soldiers, accustomed to large and reliable databases of Iraq and Afghanistan, to learn how to use camouflage nets to conceal their positions and split into small groups for the purpose of evading advanced reconnaissance drones capable of inflicting rocket attacks on living objectives or command posts.

American troops no longer have unlimited rights to the benefits of moving through the air and priority of access to land, which had in the river valleys of Iraq and among the mountain ranges of Afghanistan. In modern Europe the boundaries are taken into account in all military matters. 4th August the convoy logistical supply of the American army, carrying ammunition from Germany to Romania, were detained on the border with Austria on the basis of the restrictions imposed on military convoys in the context of increased ridership during the summer holidays.

The ten-day exercises, held in July 2017 with the participation of 25 000 soldiers, American troops and their allies in the three former Warsaw Pact countries — Hungary, Romania and Bulgaria — provided a generation of senior officers of the army the opportunity to hone modified tactics and strategy, once used to confront Soviet troops, tanks and artillery, including overnight air raids involving hundreds of paratroopers. Commanders teach, and admonishes young men, who from the 11th of September 2001, faced mostly with the underground terrorist groups in the middle East and southwest Asia.

“We need to understand how to adapt to the new environment — said the Colonel Clare Gill, graduate school of West point in 1994 and the commander of the 10th combat aviation brigade (Fort Drum, new York), flying in helicopters Apache, Black Hawk and Chinook. — I don’t think we have achieved this in full measure.”

Of course, the commanders would argue that in the foreseeable future for the wars in Iraq and Afghanistan will need many more thousands of American soldiers. But the United States and its NATO allies have recently deployed about 4,500 troops in Poland and the three Baltic States and preparing for the contents in the continent a few thousand units of armored vehicles as a deterrent to Russian aggression.

This tension is part of a growing rivalry and military buildup is not without echoes of the cold war between Washington and Moscow.

Moscow is amassing power for its own exercises along the Western border with Europe, moving troops into Syria and to the East of Ukraine, as well as increasing its nuclear Arsenal and the art of cyber warfare in an attempt — according to American military officials — to prove their worth after which lasted for several years of economic downturn and austerity measures. In September Russia has planned large-scale exercises, which can be used up to 100,000 military and security personnel.

In response, the Pentagon has intensified shift of troops for military drills and exercises on the territory of new NATO allies in the East, including the above-mentioned base in Bulgaria. The allies stepped up air, sea and underwater patrols from the Baltic to the Black sea in response to the build-up of Russian forces around the perimeter of the territories of the NATO countries.

The Russian military threat has changed dramatically since the collapse of the Soviet Union in 1991. Russian President Vladimir Putin is investing heavily in advanced infantry units and tanks and artillery. Moscow has also expanded the galaxy of unmanned reconnaissance aircraft, able to identify targets and to coordinate attacks from other weapons.

The so-called “hybrid war” of Russia combines conventional military power and ability to manipulate events, using many of the above cyber attacks and information operations with computer networks. Earlier this year, for example, Lithuanian prosecutors opened a criminal case on the fact of false reports of rape committed by German soldiers stationed in Lithuania in the framework of the NATO mission to deter Russia. Moscow denies participation in any disinformation campaign aimed at discrediting the Federal forces.

Lieutenant General Frederick Hodges, who heads the command of the U.S. army in Europe, reacted to the prospects of war between the West and Russia skeptical, but noted that Mr. Putin is unlikely to cease to escalate the situation, so as not to allow Western armies and governments to bring together its forces. “He will sit in his chair for a long time, the General said Hodges, who is completing his 37-year army career next month. The coup does not threaten him”.

Based on these considerations, the leading U.S. planners and intelligence officials are closely monitoring Russian actions in the Crimea, in the East of Ukraine and in Syria, which is a polygon for testing new weapons and tactics. The young officers of the American army again use teaching cards — or their digital equivalent — to study the structure and capabilities of the Russian army, just as in the case of previous generations of Russian troops and weapons of the 1970-ies and 1980-ies.

Training centers the U.S. army in California, Louisiana and Germany will involve a variety of scenarios to reproduce the presence of Russian troops, despite the fact that the creators of the scenarios and there, and then carefully choose the code names for the forces of the imaginary enemy, in order not to upset diplomatic relations between Washington and Moscow.

According to General Hodges, the US military presence in Europe does not go to any comparison with the situation during the height of the cold war, 30 000 soldiers against the 300 000 then. For this reason he makes an emphasis on “speed fees” — how quickly troops and equipment will be able to cover hundreds of miles and be given in full combat readiness.

Exercises worth 40 million dollars called Saber Guardian, which became the most extensive in Europe this year, included the transfer of more than 1 000 troops and hundreds of pieces of equipment at a distance of 1,200 miles (almost 2,000 km) in Europe, which is equivalent to the transition from St. Louis to Miami. Hundreds of allied troops — including U.S. soldiers with painted under camouflage — and 60-ton tanks crossed the Danube river on temporary bridges, fighting off the academic attack on the other side.

From the point of view of Eastern European armies, many of which are still using Russian-made equipment, exercises side by side with American and Western forces improve consistency and confidence, and constitute a real guarantee of support from the allies.

“We have gained some confidence in the fact that you are not alone here on the Eastern flank of NATO,” said Brigadier General Theo Toader, air force officer of Romania, who led the exercises with the soldiers of his country with a large air base near Constanta on the Black sea.

Problems, it was too much, but the exercises are designed to identify them. General Hodges, for example, have repeatedly sputtered in frustration due to the delays prevented the crossing of his forces on the continent. “We need more freedom of movement,” he complained.

Some of the local colonels — the next generation of generals of the U.S. army — was brought up on all that relates to the Russian threat, but the early years of his career spent on the battle against “al-Qaeda” or “Islamic state”, and is now back to where I started.

After graduation West point, when Russia was still considered a threat, Colonel Gill was assigned to the 101st airborne division. However, after the attacks of 11th September, he, even though he was one of the most experienced pilots of Black Hawk helicopters, spent most of his career in a small, highly classified special forces battling Islamic militants. Upon taking command of the 10th combat aviation brigade in 2016, he acknowledged that could not easily adapt to the process of preparation to the more familiar fighting.

Now Colonel Gill, under whose command is 2 200 servicemen and more than 80 helicopters of the US army, said that a major problem is the need to maintain the state of high alert, even when some of the volunteers end of life contract or to the brigade received new soldiers. Since October is completely renewed about 40 % of its units.

“We should be ready to go anywhere,” said 45-year-old Colonel Gill of Patton, Pennsylvania.

A former classmate of Gill Colonel Patrick Ellis at West point studied the Russian language, because they believed that the language proficiency of a potential enemy. After the terrorist attacks of September 11, Colonel Ellis was sent several times to Afghanistan as part of the specialized units of the U.S. army Rangers.

Now 45-year-old Colonel Ellis, the son of a naval officer from Alameda, California, commanding the Second cavalry regiment of the US army — about 4 800 330 soldiers and combat vehicles. When his troops went from Germany to Bulgaria, you have periodically made stops and interacted with local citizens, allowing their children to climb on armoured combat vehicles Stryker and explaining to residents the reasons for his presence there.

“Every morning upon awakening we know exactly who is a threat, said Colonel Ellis. — The Russian threat, we give priority”.

Eric Schmitt was born in Minneapolis, Minnesota, 2nd November 1959 and raised in the Bay area of San Francisco. In 1982 he received a bachelor’s degree in political science and developing countries of the third world in Williams College (Williamstown, mA). Currently, Mr. Schmitt is a senior correspondent for the New York Times, writing about terrorism and national security.

In 1999, Schmitt shared with journalists the New York Times a Pulitzer prize for reporting about the transfer of sensitive military technology to China, and in 2009 for coverage in Afghanistan and Pakistan. Is a member of the Council on foreign relations.