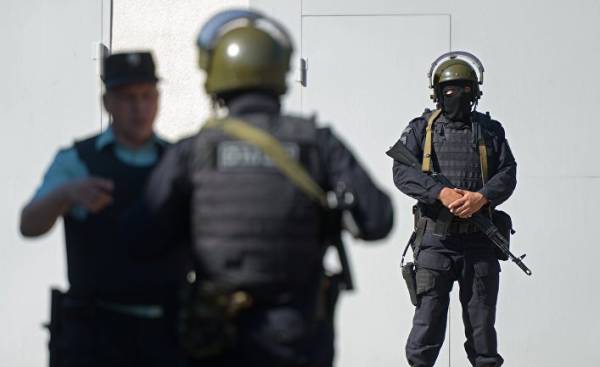 In March of 2017 I first met Adam Osmayev. Two months and seven days, and I wrote about it. Soon he was lying on the seat of his car with a bullet through the lungs.

I and the attacker were, by pure chance, one way: before you go to the front, I agreed with Adam, the former commander of the Chechen battalion, to meet in the center of Kiev. He thought of everything: first he made me wait a bit, probably wanting to observe my behavior, and then suddenly changed the meeting place to his guards found out, do not come to a new place is someone else besides me. After I silently surrounded the four men, and then there was Adam and his wife Amina.

Two months later, the first of June 2017, a person with a passport in the name of Alexander Dakar also contacted Adam posing as a journalist from France. He asked for several meetings, ostensibly for an extensive interview, so as to gain confidence and to deceive the vigilance of the guards. During the fourth meeting in the center of Kiev Dakar opened in the car of Adam’s casket, which was allegedly a gift for the couple. But there was a semi-automatic Glock pistol, which the man then fired several shots at Adam.

The thorny path of Chechen fighters

For clarity I will say that Adam is not an angel. Being the son of a senior official, who was involved in the Chechnya’s oil reserves, Adam studied at an elite English school. After coming to power of the current brutal Chechen leader Kadyrov Adam had to flee from the country, and three years later, in 2007, in Russia he was accused of the assassination of Kadyrov. In 2012, Adam was arrested again, this time in Ukrainian Odessa, and accused in the assassination motorcade Putin.

Adam spent three years. It happened that during his imprisonment he was brutally tortured. Once at the meeting, I asked Adam if he wanted to kill Putin, he only grinned wildly and gave me an evasive answer: “I’d really like, but the truth is that six months ago I survived an assassination attempt”. The words of Adam confirms Ukrainian police, according to which the detainee subsequently the assailant was explosive.

Despite the fact that Interpol issued a warrant for the arrest of Adam immediately after the revolution on the Maidan and the release from prison, Adam rushed into war, which began in the Donbass. He served in the awe-inspiring the Chechen battalion named after Dzhokhar Dudayev side by side with the legendary commander ISA Munayev, who ten years ago led the defense of Grozny, when Chechnya invaded the Russian army.

In Ukraine, people Munayev earned a reputation as the toughest fighters, they participated, for example, in a tragic battle for debaltseve. When Munaev killed during an operation deep behind enemy lines, Adam Osman took command. But even before that with some men he went in the footsteps of the beloved commander to find the enemy territory on his body, move to a safe place and then buried according to Muslim custom. Gradually Adam became a legend of resistance to Russia.

Up to the second attack, which occurred last week, Adam together with his wife remained at the front as a sniper. He was also engaged in training fighters.

When a woman gives the word

At our March meeting Adam said that Chechen fighters in Ukraine has a great relationship not only by Ukrainians, but also representatives of other peoples and faiths, including Jews, who also serve in the units. His conservative but extremely tolerant of the views of a practicing Muslim could serve as an example not one Catholic. The lowest traitors to the faith Adam believed the militants of the “Islamic state” (banned in Russia — approx. ed.) because “you can’t kill other people just because their lifestyle differs from yours”. Adam said that at first, many Chechens have joined ISIS, but soon realized that the madness of these people is not compatible with the Chechen tradition of Islam. Today the Chechens are fighting in Syria in the ranks of the moderate opposition. And the “Islamic state” considers a betrayal of the very fact that people like it, help Ukraine, that is, Christians.

Why, in fact, Adam was fighting in the Donbass? “If they lose, it will be the end for our people in Chechnya, for their hope for freedom” — says Adam Osmayev. During the interview, Amina sat in the hijab, and most of the time she told Adam. It made me question if she has any hope for freedom? How would say a typical Slovak ignorant, that the most striking example of what a woman is for Muslims — just a rag.

This is a huge mistake. Amina rag. At some point she looked at her husband as only a woman who in Muslim culture is the undisputed head of the family. She looked so expressive eyes that Adam immediately fell silent. Then she said to herself. “What are my plans for the future? To destroy the Russian Empire by any means. And only the will of the Almighty depends on when it happens. Maybe someday this will be achieved by political means, and yet we use military methods”.

The same shocking response I received and the person who broke in last Thursday for her husband. After the first shots in Adam Amin immediately drew his gun and fired three times. Then her gun jammed, and then she lashed out at the attacker with his fists. Severely wounded, he collapsed near the car unconscious. After Amina had saved Adam’s life a second time, treating his wounds.

Due to this, the next day Adam woke up in a Kiev hospital in a serious but stable condition. He survived. In the same hospital lies with the attacker.

A world that is closer than we think

The rest, as they say, another story. Seriously wounded the attacker identified as Arthur Kurmakaev, a member of Chechen shock troops, tasked with stalking, kidnapping or elimination of opponents of the Russian regime throughout Europe.

Kurmakaev embodies an interesting bond between us and a distant war in the East, which is less of interest to us. And it’s not only about the personal experience of the Slovak journalist who happened to be involved in tragic stories, as the Kremlin ruler and his vassals do with their opponents.

The story of Adam warns that deadly touch kiss Putin can be felt everywhere — even in the apparent safety of Central Europe, where Russia operates a maximum by second-rate media and third-rate politicians.

There is nothing more deceptive than a false peace: an attempt on Adam Arthur Kurmakaev was allegedly recruited by the Russian Embassy in Vienna, and his penultimate victim two years ago was a bodyguard of Kadyrov Umar Israilov. After his death the Austrian court listened to the conversation with the killer that the future victim was recorded on a mobile phone. Kurmakaev initially confessed to police that he ordered the murder of Kadyrov, but then failed to find evidence that during the incident Kurmakaev was in Austria, and soon all trace of him was lost. The murder itself was committed in the centre of Vienna, is just 50 kilometers from Bratislava.

Kurmakaev and his sacrifice remind us that the front line of Donbass, mortar attacks and the daily sacrifice became closer to our rich, arrogant and careless Europe.