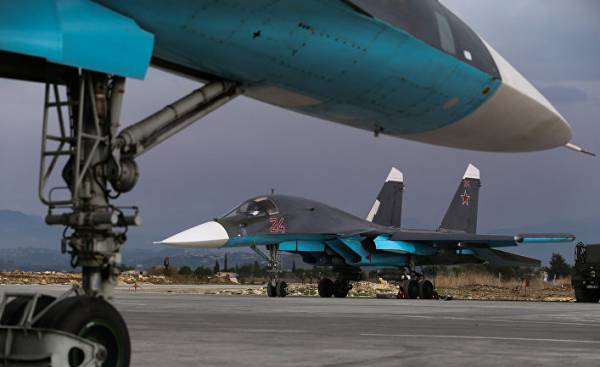 American officials acknowledged that Russia helped ease the tensions in southern Syria, where over the past few days, the United States launched several airstrikes against Iranian-backed Shiite militias and propertycasting groups.

Pentagon spokesman Navy captain USA Jeff Davis (Jeff Davis) said: “Russia were very helpful, I believe that the order that we observed it today, achieved largely thanks to her efforts.”

These incidents marked an escalation in the area At Tanfa — town on the border of Syria and Jordan, where US special forces and the United Kingdom that provides support for fighting against ISIS (a terrorist group banned in Russia — approx. ed.) factions of the Syrian rebels “Maghawir al-Thawra”.

The Pentagon has also emphasized that his main task is to defeat ISIS and that he will continue to work on this. “We came to Syria to eventually destroy ISIS, all the other measures which we have here taken, have been taken only in self-defense. We do not seek conflict with the Syrian regime or with these Pro-government factions, or sponsored by Iran forces,” said Davis.

USA used special line of communication with Russia, to ask her to contact groups and to convince them to move to less threatening positions. Around this military base was established area of deconfliction width of 55 kilometers. Although this area does not have any official status, the United States distributed leaflets and broadcasted messages via the Russians. According to Davis, during this time, Americans many times is connected with Russia, including by high-ranking military officials.

For its part, according to the Pentagon, the Russians privately supported U.S. action, although in public statements they were criticizing the Americans. Answering the question about the air strike Americans in the area suffered earlier this week, the Minister of foreign Affairs of Russia Sergey Lavrov said, “of Course, [strike in the Syrian army and its allies in the town of al-TANF] is an aggressive act that violates the sovereignty, territorial integrity of the Syrian Arab Republic.”

In private conversations, American officials say they hope the situation will remain calm and the US no longer need to take any military steps. The tension culminated on Thursday, June 8, when American aircraft F-15E was shot down made in Iran drone Shahed-129, which, according to us officials, ran from places to the North of Et-Tapa. This week, the United States launched two more strikes on the positions and vehicles of the armed forces in addition to air strikes inflicted in may.

Another official of some American military said that about 200 militants with tanks and artillery remain a few dozen kilometers from the border zone of deconfliction. At the moment, they pose no threat, but the U.S. military continues to closely monitor their movements.

To date, the United States believed that the Russians have almost no influence on armed groups in the region.

“These forces do not obey and are not controlled by Russia, is that of the formation, Davis said. — Russia does not in forces to stop them, but it certainly can transmit messages and to inform them of our concerns. Apparently, this scheme works quite efficiently.”

According to another us official, the Pentagon believes that these units carried out a trial attack, creating a network of checkpoints in trying to create a strategic land route leading from Iran to the Mediterranean coast.