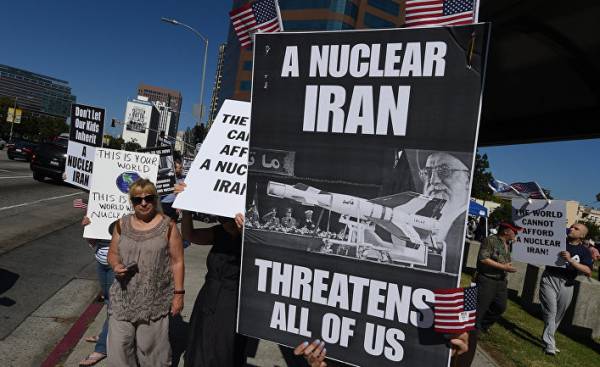 For the last time in relations between the US and Iran appeared again tension, and it was on the front pages of the world press. President-elect trump has never hidden his dissatisfaction with the agreements that concluded the Obama administration with Iran. It is sure that you can achieve more. After Iran tested missiles, the US President was subjected to strong criticism of Iran, saying that it was a specific warning to Tehran.

The Minister of defence Mathis, in turn, said that Iran is a country that at the state level supports terrorism. And when you consider an emphatically Pro-Israeli stance of the new US administration, the Israeli community and Israel were the main critics of the U.S. negotiations with Iran, the picture becomes more complete. Missile testing, by and large, cannot be considered a violation of the agreement on Iran’s nuclear program, but it has served as a very convenient excuse for trump to introduce in the agenda the need to edit relations between US and Iran.

Relations between the US-Iran should be viewed also from the point of view of the emerging global American politics. No matter how it seemed strange that Russia today is needed USA not less than USA and Russia. Growing China is the main political and economic competitor of the United States and the main applicant for a role of the second superpower. The US can not afford, therefore, they must take measures to restrict China’s economic growth at any cost. Iran is now on the path of becoming a regional superpower, and, according to the United States, poses a threat to Israel’s security and could acquire great influence in the middle East, replacing the United States.

The US cannot confront Russia and China and Iran, Washington is forced to settle relations with Russia in the foreseeable future Russia can become serious economic competitors to the United States. In addition, it is likely that U.S. relations — Russia will be adjusted, and the sanctions against Russia will be abolished. It is obvious that during the one-hour conversation trump Putin, the leaders discussed the possibilities of lifting the sanctions, as it is the most difficult issue in bilateral relations, if both sides appreciate the telephone conversation is positive, moreover, willing to meet in the near future, it is safe to say that this question has been progress.

You need to consider that trump a good enough negotiator in this process will have its benefits. What could be expected from a trump from Russia? It is obvious that Russia will not yield its positions in the Crimea, Moscow has common interests with the United States on the issue of Syria in the fight against international terrorism and so on. And given trump’s statement that he was not going to waste American money on the security of other countries (here it is possible to realize the reduction of some programs of NATO, with the exception of the placement position of the American air defense in Europe), the interests of the two countries on a number of issues coincide, and the bilateral relations are getting a new character. At the moment there are three variants of scenario in the relations of Iran — USA.

First, not very likely, scenario: the parties will try to soften the rhetoric and will continue to work on the basis of the agreements reached.

The second, more likely option: the trump will demand to cancel the agreement and offer to start a new negotiation process with more favorable starting position.

Third, the worst-case scenario: the introduction of new sanctions against Iran or the renewal of the old sanctions in full.

From this point of view, Armenia will be again in a difficult situation. If sanctions against Iran will again come into force, Armenia will not be able to promote its economic projects with a neighbor in full. Moreover, the use of sanctions may create some difficulties in the relationship of the EEU-Iran, which Armenia has a certain value and benefit, because Armenia is the only member of the EEU, which has a land border with Iran.

So if USA decides to use a tough stance towards Iran, it is possible that in the negotiations with Russia relations with Iran may become a precondition, as in the format of EEU-Iran and Iran-Russia. However, it is only in the case if USA will decide to completely isolate Iran from the outside world. Whether Russia would agree with this invitation is the topic of another discussion. As for Armenia, given these realities, Armenia should pre-plan their actions in case of a possible renewal of sanctions against Iran., because the United States will not hesitate and I can’t wait, the opportunity to implement the most likely of scenarios.