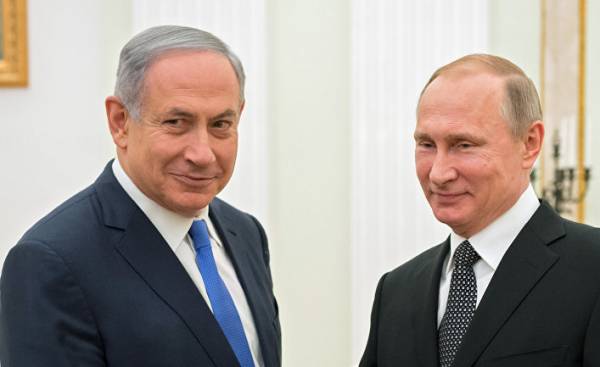 After the fall of Aleppo, Israel is worried about Iranian influence in Syria and related threats to its security. This was the main reason for another visit of Netanyahu to Moscow. The purpose was to remind the Prime Minister about the Israel “red lines”. “Iran is trying on a regular basis to gain a foothold in Syria with a military presence on land and at sea. In addition, it aims gradually to open a front against us on Golan — Netanyahu said March 5 at a meeting of the Council of Ministers. I’ll inform President Putin about the categorical rejection by Israel of the prospect”.

In the office on the first floor of the Prime Minister’s office in Jerusalem, Director of the Ministry of intelligence Chagay Curiel runs a finger along the lines on the map of the Middle East. He draws a Crescent moon, Shia axis, from the Mediterranean sea to the red. Such hegemonic plans for Israel and the Sunni powers attributed to Iran. According to the former representative of the leadership of the Mossad (he worked there for almost 30 years), Israel worries the possible construction of a permanent Iranian military structures in Syria.

“Strengthening the Shia axis of Iran, especially after the fall of Aleppo is not only a threat to Israel’s security, but also for the Sunni majority in Syria, the Sunni countries in the region and Sunni minorities in other countries, such as Russia and China, he says. I cannot allow Hezbollah and Iran to gain a foothold in Syria. We have to approve what should not be allowed. In particular, the Iranian military or naval base in Syria. That is, the long-term presence.”

This Iranian base was a new nightmare of Israel. After the signing and ratification of the United States agreement on the Iranian nuclear program in 2015, the Islamic Republic has ceased to be referred to in all the speeches Netanyahu. However, the appearance in the White house Donald trump (he alludes to the prospects for closer cooperation between the two countries against Tehran) and the change of the situation in Syria once again make Iran a priority enemy in Israeli foreign policy. During the ceremony, the Ministry of foreign Affairs on March 6, Netanyahu called Iran “the greatest generator of terrorism in the world.”

A few hours before departure, while the fourth is the account of the interrogation, the police on suspicion of corruption, Netanyahu was allowed to step away to answer the call. On the other end was Donald trump. The two leaders discussed in particular Iran. During the meeting at the White house on 15 February, the Israeli government tried to convince trump that the U.S. is interested in the recognition of the annexation of the Golan heights, where Israel following the South-West of Syria.

This telephone conversation was to give Netanyahu more weight before the trip to Moscow to Putin. Both leaders know and appreciate each other. From September 2015, they talked three times in Moscow and once in the conference on climate in Paris. “The Prime Minister wants to seek Russian commitments regarding the future care of Hezbollah and of the Iranians from Syria, or at least the formal adoption of concern — said Benedetta Barty from the Institute of national security studies in tel Aviv. But Israel has little leverage in this dialogue. Today Russia needs their presence in Syria.”

Anyway, the Israeli military leadership was impressed with how Russia managed to take Syria under control with fairly limited means, and considers which condition, if necessary, to call to order another patron of the Assad regime. “Russia and Iran are working together in Syria, but they do not have the same interests and views — emphasizes Chagay Curiel. — If Moscow wants today to achieve a pax russiana, it will need to attract US and other uncontrollable her players to ensure stability. I don’t think she needs the growing tensions between Iran, Hezbollah and Israel. I should note that she has never publicly approved the transfer of Syria’s advanced weapons to Hezbollah. In addition, it is, without a doubt, we need higher prices on oil, which is meant to avoid a final quarrel with Saudi Arabia”.

Besides, Israel wants to continue cooperation with Russia in Syrian airspace, where he regularly conducts intervention to prevent the transfer of heavy weapons to Hezbollah. The Shiite movement is making efforts in three directions: high-precision missiles with an eye to its own production, MANPADS to counter Israeli air superiority and anti-ship projectiles against the Israeli Navy in the sea or even ports. According to Israeli sources, Hezbollah has rockets “Yakhont” Russian production with a range of 300 kilometers.