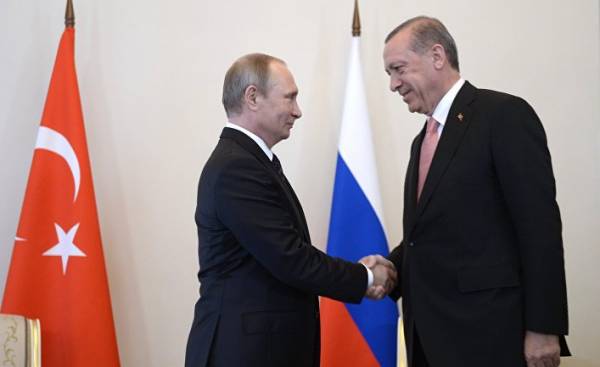 About a year ago, the Russians and the Turks feared that the two countries could erupt eighteenth war.

When the Turks shot down a Russian fighter, 65% of Turks believed that Russia wouldόLisa threat than Israel, Syria, Iran and the United States.

Now, when Recep Tayyip Erdogan (Recep Erdogan) and Vladimir Putin meet on Thursday in Moscow, relations between the two countries is characterized as historically good.

Putin and Erdogan are trying to create a long lasting Alliance.

The meeting in Moscow is causing more anxiety than the previous three since Aug. Turkish President throws them thunders of lightning to the West, especially the United States and Germany. Last week he refused to conduct election campaign among the 1.4 million Turks with the right to vote in German cities.

Erdogan in a short time could flood the weak, the EU border flow of migrants that will be beneficial for a friend of Putin, marine Le Pen (Marine Le Pen) before the presidential election.

In recent months, the two presidents managed to solve a number of acute crises.

Under the control of the rebels in Aleppo to the end, PAL, for which Erdogan had to pay dearly at home.

When the Russian Ambassador would be killed in Ankara by a Turkish employee of the security service, Putin has kept the face mask and instead accused terrorists, “supported by the West.”

When the Russian result of the mistaken bombing killed three Turkish soldiers, Erdogan has remained calm.

Together with Iran, Turkey and Russia managed to organize in Astana, the first negotiations with the participation of most of the participants of the Syrian war.

Putin and Erdogan claim that during their two-day talks to discuss “all matters”: the purchase by Turkey of the Russian nuclear power plants, modern s-400 missiles, the expansion of tourist relations, trade, scientific and technical cooperation and a gas pipeline to Europe.

But most importantly — this is war.

Both know that the loss of Raqqa and Mosul to ISIS (an organization banned in Russia — approx. ed.) — only a matter of time.

It may be the beginning of a new and more dangerous war, if only in the near future Turkey, Iran, Russia and the United States will not be able to negotiate.

The Kurdish part, the main enemy of Turkey, they become one of the winners in this war.

Trump (Trump) and Putin consider the Kurds as an important ally. On Monday, the Pentagon confirmed sending American soldiers into Kurdish-controlled Manbij, to stop the further advancement of Turkey.

Thus, the American and Turkish NATO soldiers are against each other with combat arms.

Most of the Turkish military, which had previously supported close ties with the United States, imprisoned, sacked or fled, being accused of having betrayed Erdogan.

Moscow is glad that Putin currently serves as a mediator between NATO countries and the United States on the one hand and Turkey on the other.

While trump created for himself new enemies every time starts to say, Putin’s combination of bombs and diplomacy give good results.

But this year, the Kremlin cannot hide the fact that the kings and sultans were sworn enemies from the moment when the Grand Duke of Moscow began to create the Russian Empire, and the Turks conquered Constantinople.

The founder of modern Turkey, Mustafa Ataturk (Mustafa Atatürk) had predicted the collapse of the Soviet Union and recalled 12 million Turkish citizens of different nationalities who lived under the yoke of Russian imperialism.

Turkey was a refuge for the most dangerous enemies of Putin, namely the militant Islamists who want to create a Caliphate in the Caucasus.

Putin and Erdogan were able to avoid negotiations about where they have no consent.