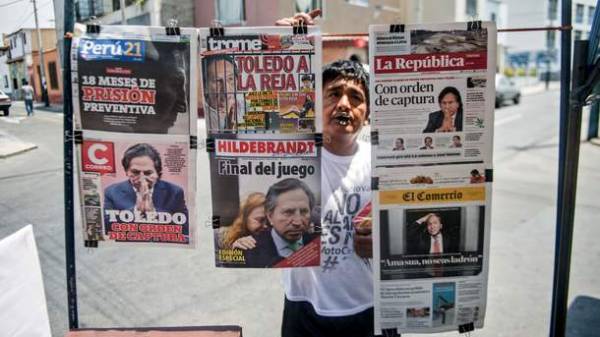 Already year are the investigation of corruption and tax evasion with the help of Panamanian law company Mossack Fonseca. Its activities became known through leaks to the media of documents about the creation of thousands of offshore companies for politicians and celebrities. And here is the scandal, dubbed “Pamagat”, entering the stage of indictment of senior politicians, which could result in their arrest. First up is the former President of Peru, Alejandro Toledo.

A court in Peru approved an international warrant for the arrest of ex-President suspected of receiving bribes from the Brazilian construction company Odebrecht is the largest in its field in South America, which used the services of Mossack Fonseca. According to portal Peru21, activities Toledo at the head of the state in 2001-2006 could contribute to the adoption of the law that made changes in the bidding rules that Odebrecht was able to obtain a number of contracts for half a billion dollars. The total amount of bribes, which allegedly received Toledo, is estimated at $20 million.

On Sunday, the current Peruvian leader Pedro Pablo Kuczynski in a telephone conversation with his us counterpart Donald trump has been asked to extradite Toledo home as the defendant now lives in California. After it became known about the attempt to extradite Toledo, it was reported that the former politician is going to fly to Israel, with which Peru has no extradition agreement. Immediately, the Israeli foreign Ministry announced that Toledo will not be permitted to enter the country. At this point, according to radio station “Reshet bet”, he was already on Board the plane flying to tel Aviv. The fate of Toledo is unknown. The government of Peru announced a reward of $30 thousand for information leading to his arrest.

ARGENTINA. Following in the unenviable position may be the current President of Argentina Mauricio Macri, who in the “Mossack Fonseca” are two offshore companies in Panama and the Bahamas. In early February, the Federal Prosecutor of Argentina has asked the court to extend the investigation into the possible existence of the Makri offshore companies. The portal Nacion reports that the Prosecutor is interested in possible dubious operations on accounts of firms Makri, which could be associated with money laundering. The investigation should, in addition, the touch of the President’s father, Franco Macri, who also appears in the documents as co-owner of offshore companies.
In the documents that were made public, Mossack Fonseca Makri mentioned, in particular, as Director and Vice-President of the Bahamas Fleg Trading company Ltd. Sam Macri said earlier about the legal basis of companies with its participation. According to the President, Fleg Trading was established in 1998, and in 2008 ceased operations due to lack of investment. The firm was declared to the tax office of Argentina.

A record fine of $3.5 billion Until early Feb in Luxembourg was an office Mossack Fonseca, the founders of which — Ramon Fonseca and Jurgen Mossak — was arrested last week. This ourcompany, founded in 1977, had 44 offices around the world. Most are already closed. The lawyer of the founders of the company declares that there is no evidence of the involvement of Mossack Fonseca money laundering, and refuses to acknowledge the authenticity of the documents, appeared in the media in April 2016. In his opinion, the journalists themselves, who allowed the publication of documents, are criminals.

Firm Odebrecht founded in 1944, is accused of bribing authorities in 12 countries. Executive Director Marcelo Odebrecht sentenced to 19 years in prison. The company paid $3.5 billion penalty by agreement with the U.S. Department of justice, under which the management has agreed to testify about the bribes.