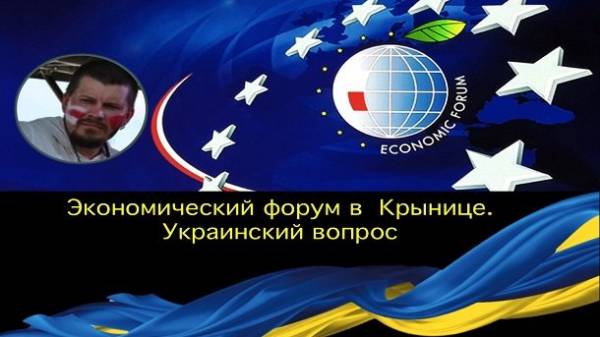 About Ukrainian issues and prospects for their implementation, said the Polish expert Arthur Prosowski.

In Poland for the third (last) day is an economic forum, and though the slogan of the meeting “Project Europe – a recipe for the next decade”, the first two days were devoted to Ukrainian issues, with the participation of Ukrainian politicians and experts, in particular, the third President of Ukraine Viktor Yushchenko and speaker of the Parliament Andrei Parubiy. In addition to the Ukrainian delegation in the forum take part more than 3 thousand representatives.
The number one issue discussed at the forum and related to Ukraine, Presovsky called the construction of the common border of four new crossing points and the renovation of two existing ones.

“The creation of modern border crossing infrastructure and increasing the number of transitions will give further opportunities for economic cooperation and development of tourism. The forum agreed that this is necessary joint efforts of the two countries to inspect the border and to budget for 2018 with both Ukrainian and Polish sides the necessary tools to create modern infrastructure and additional crossings”, – said Arthur Prosowski

Equally important was the issue of gas pipeline between Poland and Ukraine, namely increasing the capacity of the gas system of Poland, joint with the Ukrainian, to 6-7 billion cubic meters “of Gas system of Poland, which is in contact with the Company, currently has a very low bandwidth is only 1.5 billion cubic meters per year. To this volume increase, it is necessary to extend the gas connection. In accordance with the agreements signed between the Polish and Ukrainian gas transmission system, Gaz-System and Ukrtransgaz, construction, numbering about 100 km of the pipeline will begin in 2017. The extension is also important from the point of view of maintenance of the Polish project of diversifying sources of natural gas supplies”, commented Prosowski

Raised on the forum and on many Ukrainians, labour migration. According to the Ministry of social policy, about 1 million Ukrainians legally work in Poland.

“Poland is interested in attracting workers from Ukraine, which would fill gaps, formed as a result of labor migration of our compatriots abroad. And if earlier Ukrainians were mostly taken in the working field, now many of them work in the sphere of intellectual labor. It is also a sensible financial experts, and programmers, and managers, etc. In the Ministry after the forum to review the policy of bonuses for the results, since it is a very low percentage, and I would not want that a valuable resource has gone on in Europe or that the Czech Republic, which is becoming more open to workers from Ukraine, in particular, specialists educated,” commented Prosowski.

Not without slippery historical subjects. So, the conflict question dangling in the air, was lisinovich Polish passports, dedicated to 100-th anniversary of independence of the country, which at the initiative of the Polish foreign Ministry want to place an image of the Memorial in Lviv Eaglets. Ukraine reacted negatively to this idea. “While the issue is open and pending. Design choose not Ministers and politicians, and the people through online voting. The vote will be presented to 19 images related to the poles and the events of 1918, six of which are offered to select Internet users – citizens of Poland,” commented Prosowski.

During the forum the Ukrainian representatives have discussed many global topics and issues. In particular, about the threat the project “Nord Stream II”, on cooperation in the defense sector and new projects of economic cooperation. Discussed the possibilities of investment on the part of Polish small businesses in the Ukrainian economy and not only Polish,” concluded Prosowski.

According to experts, the forum gave hope for a significant improvement of Ukrainian-Polish relations, which are a little cold lately for various reasons, in particular, to historical disagreements. Therefore, the meeting discussed and made plans for the future, and not remembered and argued about the past.