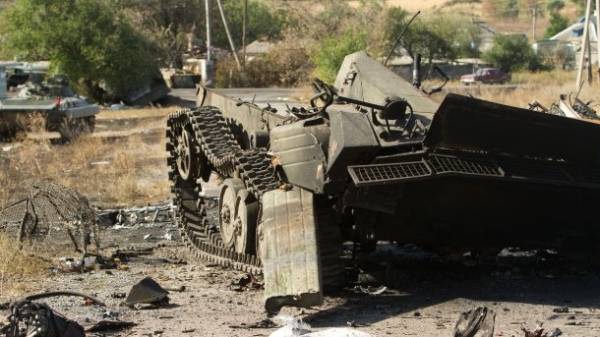 Fault in the shooting of the Ukrainian military under Ilovaisk in 2014 lies with the Russian leadership. This is stated in the message of staff armed forces of Ukraine in Facebook.

“Due to the insidious introduction on 24 August 2014 of Russian troops on our territory, Ukrainian soldiers, volunteers and mobilized were surrounded and under fire missile and artillery systems. This has led to the deaths of 366 Ukrainians, 429 soldiers were injured, and 300 soldiers were captured”, – stated in the message.

The military noted that this crime has no Statute of limitations nor morally, nor in the legal plane.

“There is no doubt that the organizers and perpetrators of this crime will be punished, and the Armed forces of Ukraine will make every effort to that end. It is important to understand that the politicization of the events in Ilovaisk plays into the hands of the enemy, artificially diverting the public from the real culprits who are in the Kremlin”, – said the General staff.

We will remind, in August 2014, was the scene of bitter fighting for the city of Ilovaisk in Donetsk region, which 29 numbers ended in a mass destruction of the Ukrainian military.

As reported, 14 August 2017 the office of the Prosecutor of the International criminal court to address the issue of opening of criminal proceedings by the Chief military Prosecutor’s office handed over information about the collected evidence of war crimes (including the murder of the Ukrainian military near Ilovaysk).