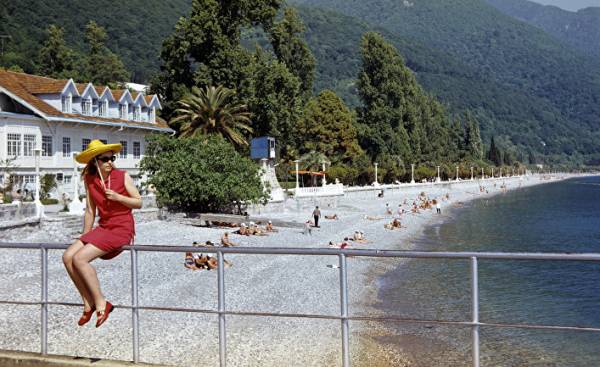 The city of Gagra on the Black sea was one of the favorite resorts of the Soviet Union — like the palaces of the resorts, palm trees, beaches. It is located in Abkhazia, a territory that unilaterally declared its own independence, and where today spend their holidays mostly Russians. Our author visited this amazing place.

Worn tile adorns the narrow bridge that leads from the hillside. Many tiles are broken and only hastily smeared mortar. And yet they still form a pattern of Communist stars as when the city of Gagra was still the most popular resort of the USSR. Gagra is Abkhazia on the Black sea, which at first was a separate Soviet Republic, then an Autonomous SSR within the Georgian SSR, she has been called the “red Riviera”. More than half a million Soviet citizens and more than 20 thousand foreigners each year to enjoy your vacation in Gagra. Regularly came, politicians such as Joseph Stalin, Nikita Khrushchev and Mikhail Gorbachev. Since then much has changed, but nevertheless the style of the era is still alive. In the region, which in accordance with international law belongs to Georgia, but with the help of Russia unilaterally declared its independence, continues to rest mostly Russians. To meet foreigners from the West in this amazing location with a hot climate difficult.

At the end of the pedestrian bridge “a Hundred suns” is waiting for the Elevator to take the guests of the sanatorium “Moscow” about 30 meters down to the sea. The once elegant design creates a strong impression of wear, but the lady at the front Desk assures that the Elevator works. Indeed, when you press the button for the doors starts rumble: something is moving. While waiting eyes lingering along the coast. Gagra appears among the dense subtropical vegetation. Resort town located at the foot of several mountains that rise thousands of feet into the sky. They are up dramatically behind the many resorts and hotels. People live here only in a narrow strip between the sea and the mountains.

While metallic hum coming from the mine, the breeze brings the salty sea air, despite this, hot and sultry. In the distance the warm sunlight reflected in the water. The cab is waiting and picks up with a plaintive moans rushes in the direction of the beach. Early, perhaps ride the Elevator passed besshumno. After all, for vacationing Soviet citizens were provided with only the best. They were not tired from the large number of steps.

Bottom approaching deliverance in the form of cool waves. The thermometer shows almost 30 degrees, the swimming season is in full swing. The Elevator shaft ends in a luxurious arrival lounge with balustrades and columns, whose shape was borrowed from the ancient world. This kind of pompous architecture everywhere surrounds tourists in Gagra. It refers to the time when the Soviet Union began to assert itself as a superpower. Surrounded by monumental palms motels along the coast and in the same style. Palaces of the proletariat show a frozen picture of their former glory.

Colorful directory for vacationers from the last years of the Soviet Union is in a dilapidated premises and nearly falling apart from humidity and decay. Crumbling pages describe what a resting place until in 1991 the Soviet Union collapsed and shortly thereafter in Abkhazia, war broke out. Almost all Georgian population then was forced to run and until today is not able to return. Abkhazia declared its independence, which is recognized only by Russia and three other countries. The West talk about “breakaway territories”, which officially belongs to Georgia. Georgians no longer have voting rights in Abkhazia, Abkhazians have their own laws and language, but mostly people speak Russian, and are calculated in Russian rubles. 100 thousand visitors who are currently enrolled in summer the beaches and resorts come almost exclusively from the Empire of Vladimir Putin.

Valentina is one of the many Russian tourists in Gagra. It just rises after bathing, water dripping from her tanned shoulders. She is unable to hide his delight. “Wonderful climate and nature, too,” she says and nods towards the mountains, the tops of many of them in the summer and covered with snow. The waves produce a meditative rustle. Fishermen cast their fishing line, they stand on the broken concrete piers that protrude above the surf. Previously, they were used by the Soviet vacationers as a platform for sunbathing. Now they are in the sea as the boats that crashed. Jumping dolphins in the distance.

Interview with Valentina tied fast. She says about the Soviet era, which he calls the good old days. She likes to live in the old resort which is said to be just like her hometown: Moscow. Of course, she would show the visitor the historic building, she quickly dressed.

Brown walnut parquet floor laid in herringbone creaks under our feet. On the walls hang large original paintings in the style of socialist realism. Preferred in the Soviet Union style of art idealized the power of the state via easily viewable motifs and compositions. One painting in bright colours, representing children playing, surrounded by flowers and lush fruit trees. Brushstrokes convey a sense of happiness, peace and harmony.

Although the Soviet Union collapsed and ceased to exist in 1991, here, apparently, the past is still in order. Under the art in public areas of the hotel are plush chairs and solid tables made of dark wood. Powerful sunlight right after heat curtains. From their folds shed ambient light, which lends a mystical mood to the whole building.

“It’s a beautiful old resort. During the Second world war it was used as a hospital for wounded soldiers,” says Valentine. The main building was built in 1935. At the reception she asked for the key to the locked library. Now her fingers struggling with the rusty padlocked. Outside the door overlooking the tomb for the abandoned works. Here previous guests of the resort were given to the ideologically correct literature, which in ordinary days at home they often do not have enough time because they were too busy building socialism in the factories and farms.

Between the shelves it smells musty, dust a thin layer formed on the header “Theory of communism”, the “Class struggle” and “Dialectical materialism.” “No one uses this library,” says Valentine.

The ravages of time imperceptibly saps and other buildings in Gagra. Several hotels-palaces in the brutal style of the 60-70-ies are empty and slowly crumbling. Between paving slabs, weeds growing everywhere. A huge cone-shaped silhouettes of the cypresses reach the balcony and threaten to obscure the view of the sea. Stuffy and humid, like after a rainstorm. Drops fall from the leaves. They form circles in the puddles that appeared on the tile. They swim from the pine needles.

A little farther up the shore you can see probably the most beautiful resort of Gagra. He gives the impression of a luxurious estate of a Roman Senator. But not Jupiter, not Minerva, not Neptune’s lobby. Instead, the Central place here takes the founder of the Soviet state Vladimir Ilyich Lenin. Artificial marble gives the leader of the revolution, an aura of solemnity. On the sofas around the statue of Russian tourists diligently writing something on their smartphones. Just served dinner, the guests took their places at small tables.

Heavy chandeliers sparkle over the dining room and illuminate the milky way Communist stars that adorned the ceiling. Mrs. Chuvahina regularly spends his holidays here, in the sanatorium “Amra”, in 1957, five years after its completion, she said proudly.

“At the time I was 27 years old and my husband is 29,” she says, and glances at his companion, who during this time has made a career entomologist. “I have written five books on the subject and was a member of the Soviet Academy of Sciences,” says 88-year-old Professor and staring through the thick lenses of his glasses, horn-rimmed, as if he were going to examine a particularly interesting specimen of insect.

Mrs. Chuvahina SIP spoonfuls of soup. “In the Soviet Union everything was better than now,” she said, alluding to the degradation of public order and the gradual destruction of the Soviet legacy after the collapse of the Soviet Union. In Abkhazia, this process was aggravated by civil wars. A majestic resort hotels and sanatoriums were then looted and burned.

In many places in ruins: in swimming pools no longer have water, many hotel establishments are empty, and the audience has long left the cinema, rows of seats which had long been stolen. Mrs. Chuvahina, of course, is found responsible for the unstable situation, and, of course, knows how to deal with it: “the Chaos that is happening in the world USA, makes it clear that socialism is the only true response to the challenges facing the world.”

While we reflect on this rough argument, an elderly couple says goodbye and, just like the past 60 years, together going to my room. To enjoy from there the view of the Black sea and to grieve about the deceased Soviet Empire, which is in Abkhazia, in this particular location and surprisingly many survived.