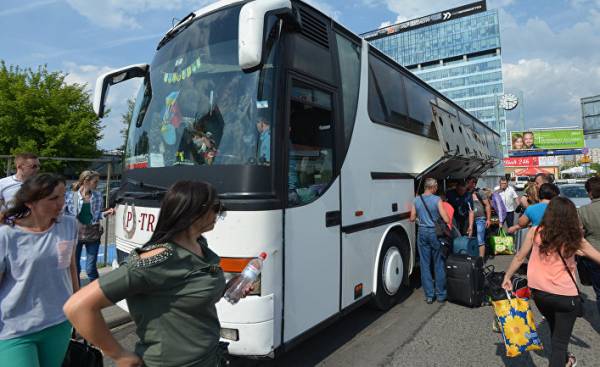 August 11 will be exactly two months since then, as Ukraine has received a visa-free regime with the EU. As new conditions have affected the relations of Ukraine with neighbouring Czech Republic? “In practice, the introduction of visa-free regime between the Czech Republic and Ukraine while there is minimal,” — said in an interview with Sputnik, the political scientist and civic activist Ian Miklas.

— Jan Miklas: Now Ukraine borders are open, and, nevertheless, in practice, the effects are felt only in the tourism industry. By the way, the vast majority of Ukrainians who come to the Czech Republic almost exclusively from Western Ukraine, they come here to work, not relax. For Ukrainians there is a limit that allows them to stay in the Czech Republic without visas and appropriate work permits only 90 days. For further stay you need a special work permit, which Ukrainians often help to make the Polish Agency intermediary. So basically nothing has changed, and even increased the flow of Ukrainian labour migrants.

However, there is some tendency, some Czech politicians and businessmen insist that significantly simplify the procedure of registration of Ukrainians in the Czech Republic. It would, however, warn members of the party KSČM, will lead to the mass immigration of Ukrainians seeking work in the Czech Republic. And in the most part these people are not characterized by a high qualification of specialists among them would be the minority. The biggest part is the poor Ukrainians from Western Ukraine are ready to work in very poor conditions. They are more down to wages in the poorly paid occupations, lowering wages of citizens of the Czech Republic. And talking about “professionals” with Ukraine that will enhance “competitiveness” in the Czech Republic, big business only lulls the Czech public. He just needs workers willing to work for minimum money. Businessmen, no matter how it will affect the Czech labour market.

— Sputnik: is the growth of the tourist flow from Ukraine increased revenues from Ukrainian tourists?

Data for the last months yet. But the data is in 2016, by contrast, confirm the downward trend in the number of Ukrainian tourists compared to the period before the Maidan. For example, 12 thousand decreased the number of Ukrainian tourists who spend in Prague for more than a night. It speaks about real impoverishment of Ukrainian society and that in Ukraine not many people who can afford holidays abroad. The introduction of a visa-free regime, most likely, will not change anything.

— Has expanded over the past two months the Czech company in your state at the expense of low-paid skilled professionals from the Ukraine? How do things stand with the Ukrainian labor?

— In 2016, the Czech government tried to open the program to attract skilled labour from Ukraine, but the project failed. So the Czech company has not received more qualified professionals from Ukraine. According to L. Chamber, an analyst of the newspaper MF dnes, most of the skilled and unskilled labor took Poland, which suggested the Ukrainians, especially the professionals, a more attractive environment.

Generally Czech Republic is not very interesting for the educated Ukrainians, as the Chamber noted in his article. If you compare the number of vacancies in the Czech Republic in may 2017 (up to a visa-free regime) and July 2017 (after), it turns out that the difference is almost zero. In may in the Czech Republic had 308 521 free workplace, and in July of 2017 — 303 074, that is a little less. However, this is due to the seasonal increase of interest in employment, and not the tide of the labor force from Ukraine. That is, in practice, in this respect, nothing has changed.

Until the abolition of the visa regime for Ukraine did not particularly touched upon the Czech Republic, which in the first place, due to the barriers that hinder the mass, mainly labour immigration to the Czech Republic. Tourism is not yet revived, and soon Ukrainian tourists will be no more. So CHR is hardly anything gained, but nothing lost.

However, the important thing now is to think what would happen if the government succumb to the pressure of business and destroy the barriers to mass labour migration from Ukraine to the Czech Republic. Whether Ukrainians still prefer Poland, or do you rush to the Czech Republic? And then what will happen? It is clear that the will not only worsen the working conditions for the Czechs, but the security situation in the country, because Ukraine can come the criminal elements.

The political and economic situation in neighboring Ukraine is very sad. Everywhere corruption is rampant, rampant ultra-right groups and strengthen ties in the circles of politicians, businessmen and security officers, and leading the charge of economic oligarchy. This is also the reality that awaits us in the case of the facilitating conditions of employment for Ukrainians.

We need to admit that the abolition of the visa regime is just a way to reassure Ukraine that it is not out of the sphere of Western influence. The abolition of the visa regime — a purely political move of the EU. And from the point of view of the current situation this step was rather harmful. If there are fixed barriers for Ukrainian labour force in the EU, the negative consequences of this step can have an impact in a few years. Fortunately, while in the Czech Republic, speech of. Yet, but who knows…

It all depends on the further development of the situation not only in the EU but also in Ukraine, which today is a highly unstable country, where the situation can change dramatically at any moment.