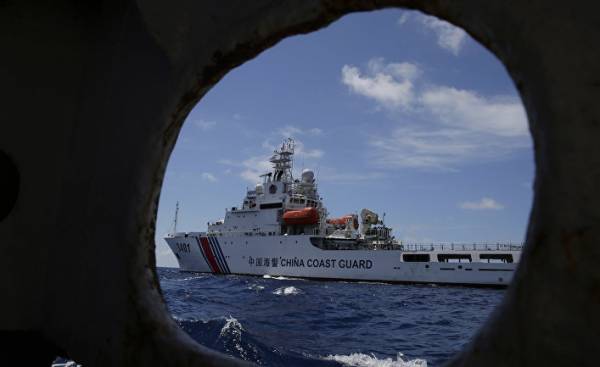 China became convinced of the concessions Russia, which easily passed the Western part of Bolshoi Ussuriisky island and Tarabarov island. China decided to use Russian experience in the South China sea.

Recently U.S. Secretary of state Rex Tillerson and the Ministers of foreign Affairs of Japan, Taro Kono and Australia, Julie Bishop called on the Chinese leadership to stop unilateral military actions in the South China sea. According to them, China built artificial Islands on coral reefs can change the status quo, cause tensions in the region and obstruct the free navigation in the waters of the South China sea.

The South China sea for many years troubled due to territorial disputes that China has with the Philippines, Brunei, Malaysia and Vietnam over the Spratly Islands and the Paracel archipelago. The Chinese leadership considers these Islands its “historical lands”, considering that the Chinese some 2 thousand years to use them in their business activities. Neighboring States defend their rights to these Islands. Their position is shared by the US, Australia and Japan who are not interested in strengthening of positions of China in the region. The foreign Ministers of the USA, Australia and Japan urged China to adhere to the decision of the International court in the Hague. In 2016, the arbitrator was of the view that China has no legal grounds to assert historic rights to resources in the waters of the South China sea within the boundaries of the disputed Islands. A large part of the Spratly Islands and the Paracel archipelago made up of individual reefs and rocks that are not considered Islands and flooded during high tides. According to the UN Convention on the law of the sea, reef and flood rock, which are outside the territorial sea of any state, cannot be considered Islands and have their own territorial waters. To hold a count of 200-mile economic zone from the coast land, including Islands.

China refuses to take into account the decision of the International court in the Hague and continues to pan the sand on the reefs in the South China sea with the help of special engineering vessels in order to turn them into Islands. According to the report of American analytical center CSIS, China has created artificial Islands on the reefs of fayri Cross, Subie, Mischif. Now the Chinese engineers are building on these Islands infrastructure dual-use objects that can be used in military and civilian applications: airfields, radars, communication nodes. Not to mention the shelters for rockets of a class “earth-air”, which is also on artificial Islands. In 2015, Chinese President XI Jinping cheated when assured that construction work on the Spratly Islands do not affect the interests of any country and China does not intend to carry out their militarization.

The impression that China is creating artificial Islands in the South China sea in order then to proclaim its sovereignty to them. According to the law of the sea, artificial Islands do not possess the status of Islands, have no territorial sea, exclusive economic zone and continental shelf, and from them it is impossible to count the 200-mile economic zone. They need China for other purposes. With the help of artificial Islands, China hopes to control the Spratly Islands. Military and civilian targets on the territory of the Islands is a cover to justify the need for a permanent presence of Chinese military and sailors in the region. If China is to count the 200-mile economic zones from the disputed Islands, he will be able to transform a large part of the South China sea in its territorial waters. This sea is of strategic importance and is one of the main routes of Maritime trade. Every year, commercial vessels are transported through the South China water goods worth $ 5 trillion. The presence of military facilities on the artificial Islands will allow the Chinese to assert control over the South China sea. Today, the Chinese military called areas, where the construction of artificial Islands, “area military alert” China and demand from the crews of foreign aircraft to leave the airspace.

Chinese artificial Islands should be considered as a simplified alternative to the aircraft carrier fleet. In the Pacific the US Navy used aircraft carriers as a floating military base to be a long time off the coast of regions where the US has vital interests. Armed Americans are 11 aircraft carriers. Naval forces of China are far behind in number of aircraft carriers from America. Yet the Chinese in the ranks 1 carrier “Leolin” — completed Soviet aircraft-carrying cruiser “Varyag”, which Ukraine sold to China. The construction of another aircraft carrier Shandong will be completed in 2020, China needs to secure a permanent military presence in the South China sea and the waters of the disputed Spratly Islands and the Paracel archipelago. In the hangars on the artificial Islands of fayri Cross, Subie, Mischief can be 24 combat aircraft (a total of 72), 4 military transport aircraft or a heavy bomber. For comparison, one American aircraft carrier type “Nimitz” allows to place on the deck of 64 combat aircraft and helicopters.

Manipulation of artificial Islands in the South China sea resemble the actions of China against Russia. China pursues territorial expansion against Russia, influencing the change of the riverbed of border rivers, while the Russian leadership does not spare funds for military adventurism and provocation in Eastern Ukraine. China is actively developing its Bank of the Amur, conducts dredging, strengthens the gravel, rolls in concrete its shores, contributing thus to the change of the river bed. As a result of actions of the Chinese side for Cupid tempting the Russian coast, and the river goes in the direction of Russia. Since the Russian-Chinese border runs down the middle of the channel of the Amur territory, which had previously flowed the river, was on the Chinese coast and become the object of claims of Beijing. According to the Director of Biology and soil Institute Feb RAS, academician of RAS Yuri Zhuravlev, China also takes measures to change the channel of the river Sungacha, which overflows the border of the lake Khanka and floods the Russian territory.

Due to changes in the channel of the Amur river, Russia and China have repeatedly carried out the demarcation of the border. In 2005 China received an area of 337 sq km In 2008 in the Chinese province of Heilongjiang has entered the Tarabarov island, the Western part of the island of Great Ussuri, flow Kazakevichevo, and part of the Russian coast, which began to pass the land border. The Chinese continued dredging works in Kazakevichevo channel, with the result that in 2010, the water left section of the Russian territory the size of a football field. In the former Russian territories, the Chinese are developing infrastructure: built a bridge connecting the Western part of the Big Ussuri island with the land, paved on the island highway with four lanes, erected the monumental complex of the pagoda, opened the Park a marshy land. In 2016, the Chinese convinced the Russian leadership to agree to joint development of the infrastructure of the island under the pretext of “preserving the environment in its original form”.

The Chinese leadership is convinced of the compliance of the Russians, who without much debate, gave the PRC the Western part of Bolshoi Ussuriisky island and Tarabarov island. China decided to use Russian experience in the South China sea. As against the manipulation of China changing the course of rivers has not performed a nuclear superpower in the face of Russia, it is doubtful that the measures on creation of artificial Islands in the South China sea will meet effective resistance from the Philippines, Brunei, Malaysia, Vietnam. China enjoys the inaction of neighbouring countries and has successfully absorbs the disputed Islands in the South China sea.

Against scrap no reception

The relationship between the US and China have deteriorated markedly in recent years against the backdrop of U.S. sanctions against certain Chinese firms, which have developed trade and economic relations with North Korea. The intransigence of China on contentious issues in the South China sea only reinforces the dissatisfaction of the President of Donald trump his Chinese counterpart who failed to convince the Supreme leader of the DPRK Kim Jong-UN to cease to conduct missile and nuclear tests. The US solidarity with Japan, to which China is a competitor in the Asia-Pacific region. Between China and Japan have a territorial dispute over the Senkaku Islands which are under Japanese jurisdiction. However, the options are pressure on China, the United States is limited.

The experience of ex-US President Barack Obama confirms the ineffectiveness of the show of force to China. U.S. warships repeatedly went into the South China sea. The Democrats wanted to confirm, thus, their seriousness and support of the countries of South-East Asia in territorial disputes with China. However, China did not stop the construction of artificial Islands to this day. Administration Republicans will be difficult to convince China to stop building artificial Islands in the South China sea. China is perceived to impose sanctions against their companies from the United States as an unfriendly act. In Beijing don’t trust Donald Trump, who before the inauguration, held talks with the leadership of Taiwan violated the “one China policy” and has recently supplied us weapons to the island. Since the establishment in mainland China of the Communist regime, Beijing is interested to establish control over the Chinese island of Taiwan, which refused to recognize the regime change.

The United States can impose anti-China sanctions, similar to the recent new sanctions against Russia, Iran and North Korea. However, such a move is not beneficial to American business, for which China is the main trade partner and creditor. Sanctions against certain sectors of the economy of China will cost US too much. The American and Chinese economies are mutually dependent. In a dispute over Islands in the South China sea, the advantage is still on the side of China.