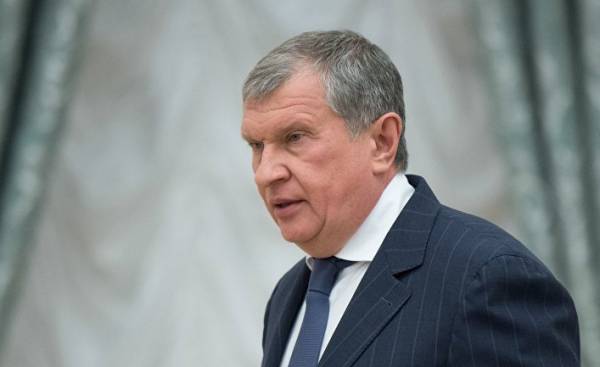 Despite the still unresolved crisis in Ukraine, German-Russian economic relations are once again gaining momentum. Igor Sechin, CEO of the largest Russian oil company Rosneft, said in Berlin that he intends to double investments in the German market of oil refining and gas stations.

According to him, in the next five years “Rosneft” invests in the German market of about 600 million euros. About Sechin said at the opening of branch “Rosneft” in Berlin. Thereby he doubled the existing investment plan.

Not only that: “Rosneft” wants to connect South Germany through the construction of a new oil pipeline to its Eastern European pipeline networks. Both refineries — Miro in Karlsruhe and Bayernöl in foburg/Neuhaus should be supplied directly from Russia as a result of elongation of the oil pipeline “Friendship”.

“In order to improve stability of supply and efficiency of refineries Miro and Bayernöl it seems appropriate to carry out the project of a pipeline across the southern branch of the Druzhba pipeline to refineries in the South of Germany”, is caused by the statement made by Sechin in Berlin.

Rosneft is number three in Germany

This project could trigger a new debate about too much dependence of Germany on Russian energy supplies. Because until now both refineries in southern Germany were supplied through the so-called transalpine pipeline “Transalpine Pipeline” (TAL). This pipeline ends at the Northern Italian port of Trieste and served still primarily oil tankers from North Africa and other oil producing countries.

“Rosneft” last year dissolved the German joint venture “Ruhr Oel” with the participation of British energy group BP. Since then, the share of Russian refineries Miro and Bayernöl is respectively 24% and 25%. In addition, Rosneft has increased its participation in the refinery DGC in Brandenburg Schwedt to 54%. RSK already supplied through the Northern branch of the Druzhba pipeline, Russian oil.

Thus, the Russian oil giant is now the third-largest enterprise for processing mineral oils in Germany, with over 12% of all German refining capacities. At the same time the share of “Rosneft” is 25% of all German crude oil imports.

The weakness of the ruble contributes to the development of

Sechin expressed regret over the Western anti-Russian sanctions, announced over the annexation of Crimea. Shifting political differences on the shoulders of businesses is a “sign of weakness”, said Sechin. About 49% of Rosneft’s shares belong to their respective owners in the West, said the chief of Rosneft. Only BP has an almost 20% stake in Rosneft, 50% owned by the Russian state.

Executive Director of the Eastern Committee of German economy Michael harms (Michael Harms) stated during the event that the German-Russian trade in the first two months of this year has increased dramatically. Only on export from Germany increased by 36%.

“We expect that German-Russian trade will increase this year by ten percent, if not more,” said harms. The most important incentive for this development is the current weakness of the ruble.

According to data presented at the presentation, Rosneft is the largest publicly traded oil group in the world, which has significant energy reserves in the amount of 137 billion barrels of oil equivalent, including a large amount of natural gas. Second place in this global ranking is according to the ExxonMobil 82 billion barrels of oil equivalent.

Rosneft has a leading position among the listed firms also oil a day it produces 5.7 million barrels of oil equivalent, while the share of concern ExxonMobil, ranked second, accounted for only 4.1 million barrels. The cost of oil production Rosneft with 2.5 dollars per barrel, much lower than the cost of production of all other oil companies.