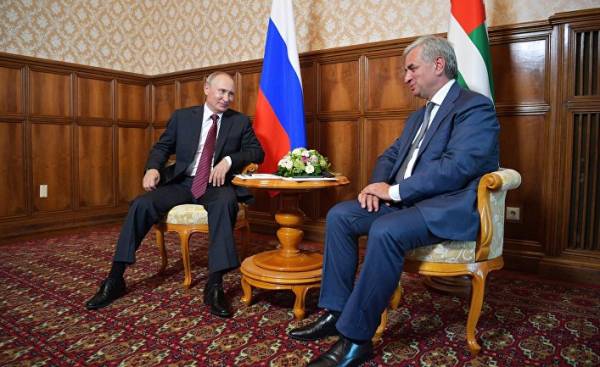 The President of Russia Vladimir Putin visited Georgia’s breakaway Abkhazia on the anniversary of the Russian-Georgian war in 2008 and promised Sukhumi “stability and independence”.

The visit took place on 8 August, the ninth anniversary of the five-day war between Russia and Georgia over another breakaway Georgian territory of South Ossetia. Soon after the war Russia recognized the independence of both separatist entities. But her example was followed by only a handful of countries, and the majority of countries still consider Abkhazia and South Ossetia as part of Georgia.

“I can’t not mention that today’s date is August 8 for the Republic of South Ossetia and Abkhazia — is a mournful date — the said de-facto President of Abkhazia Raul Khajimba at a meeting with Putin. — This day began a large-scale operation of Georgian army and the decisive action that was taken by the leadership of the Russian Federation, gave the opportunity to save the Republic of South Ossetia and of course given the opportunity for further recognition of our States, for which we bring you a huge gratitude.”

And Putin added: “We firmly guarantee the security and independence of Abkhazia’s independence. I am sure that this will happen next”.

It is noteworthy that Putin arrived in Abkhazia in just a few days after the visit of Vice-President Mike Pence in Tbilisi, where he attended a joint U.S.-Georgian military exercises and expressed support for Georgia in its efforts to return Abkhazia.

Georgian analysts have expressed the view that Putin’s visit was a response to the arrival of Pence. So it is not quite clear, but the local division of the Russian state news Agency Sputnik quoted Abkhaz presidential Advisor Vladimir Zantariya, who said that Abkhazia is a “reliable partner” of Moscow. Similarly — “Reliable partner” — was named exercises in Georgia, which was attended by the Pens.

It should be noted that Putin’s visit is likely to have been planned even before it became known about the plans of the Pens to visit Georgia, but the Russian leader, however, like it was a coincidence, said Sergei Markedonov, an expert on the Caucasus at the Russian state humanitarian University. “If this visit gives grounds to speak about the response of Russia, Putin is happy. He was pleased the role of disturbances for the United States,” said Markedonov EurasiaNet.org.

Although such a message would be more appropriate to send out of South Ossetia, an additional objective of Putin’s visit to Abkhazia was to strengthen relations with Sukhumi. First, Abkhazia is often annoying overbearing behavior of her powerful patron, and, secondly, the internal political processes in Abkhazia are more acute than in South Ossetia. “Everything would look better from South Ossetia but in Russia it is considered as less problematic Republic, Markedonov said. — Russia is very concerned about the potential problems and instability in Abkhazia.”

The government of Georgia, who spent a special event in honor of those killed during the war in 2008 Georgian citizens, condemned Putin’s visit.

“Such a cynical act of the ninth anniversary of the Russian-Georgian war aims at the legitimization of violent change of borders of a sovereign state through military aggression, ethnic cleansing and occupation. At this stage, the Kremlin is trying in vain to maintain and legitimize its occupation modes”, — reads the statement of the Georgian foreign Ministry.

Putin was one of the few Russian guests who visited Abkhazia recently. After the explosion at the ammunition depot in the village of Primorsk on 2 August, which killed two tourists from St. Petersburg and another 64 people were injured, Abkhazia is “a powerful wave of failures of tourists,” said RIA Novosti President of the “Union of Abkhazian tourism” Anna Kalyagin.

Three weeks earlier in the same seaside local attacked a group of tourists, killing one of them. But before that the number of tourists in Abkhazia fell as a result of the bad weather and the difficult economic situation in Russia.

“Compared to last year we fail now 30% — said Kalyagin, RIA Novosti reports. — The weather was bad: may — rain, June rain. Just in July, swing and here such high-profile events. Of course, people in terror, in panic, in shock.”

Putin said that during the talks in Abkhazia in particular was discussed the question of the safety of tourists. He also referred to the cooperation agreement between the ministries of internal Affairs of the Russian Federation and Abkhazia. “The citizens of Abkhazia, and Russian, and the guests, wherever they came, including from Russia, should understand and feel that they are under reliable protection”, — he said.