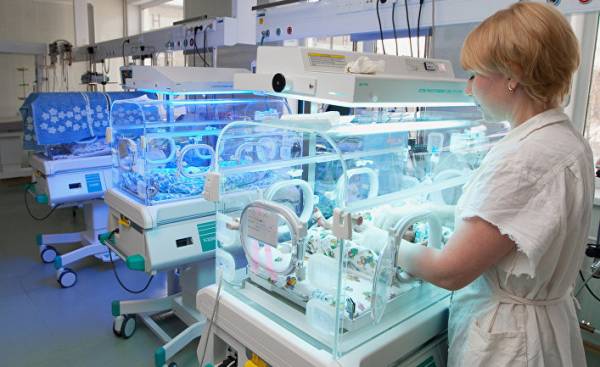 In Russia the third consecutive year, declining birth rates, and the trend has steadily increased and this year there was a real collapse. The result is resumed staying was a natural population decline. According to forecasts, the number of newborns in the country will not begin to grow until 2030.

Because peak fertility occurred in 2014, and then began steadily to fall, it seems likely that a significant role was played by the then incipient economic crisis.

“For all time the history of modern Russia the birth rate is well correlated with economic development. Only the position stabiliziruemost, as directed and incomes start to rise — increasing the birth rate and the demographic situation is improving, and the crisis arrives — again failure. Only now, the crisis lasted longer than usual, and the demographic hole deeper,” — said in his article Nikita Isaev, Director of the Institute of contemporary economy.

A similar opinion was expressed in an interview with RIA Novosti, Professor, head of laboratory of monitoring of risks of sociopolitical destabilization of the HSE, Andrey Korotayev, noting that “the crisis is fertility is declining almost everywhere”.

One of the reasons for the decline in fertility is a reduction in the number of women of childbearing age. In particular, according to the official data, for the period from 2010 to 2015, the number of women aged 20-29 years (which accounted for about 60% of all births) decreased by 1,750 thousand, or 14.6%. Experts explain this by the small size of the generation born in difficult 1990-e years, and clarify that since the great Patriotic war, such as the demographic pit appear about once in 25 years.

In addition, aggravated the demographic situation in Russia, the postponement of childbearing (maternal age at birth of first child 25.5 years, rising to three years for the last 20 years) and the increase in childless women. “More and more evidence that among the generations of women, starting with those born in the 1970-ies, the level of final childlessness will increase compared to the previous generations. Our forecast of potential growth of childlessness in line with the assessment for the entire region of Eastern and Central Europe: in the range of 15-20% (previously it was at the level of 6-8%),” write the authors of the report “Monitoring the economic situation in Russia.”

In recent years, Russia with a view to increasing the birth rate implemented a number of measures, including maternity capital (payment for the birth/adoption of the second, third and subsequent child is now about 453 thousand rubles), a monthly cash payment for a third child, free provision of large families of land for housing, the increase in places in kindergartens. The government of the Russian Federation believe that all of this allows you to “mitigate the negative impact of deterioration of the structure of the population.”

The researchers assessed the results of the demographic policy of the state is reserved. “Some positive developments do exist, but their importance is not adequate to look at the future of Russian fertility and reproduction of population of the country with optimism,” the article says, based on the results of the research project “trends of demographic development of Russia in 2005-2015 in the context of long-term demographic trends”. Experts, in particular, have concluded that “the first effect of the policy measures introduced in 2006-2007 years, the year was fading rapidly,” and the growth of the birth rate in 2012 associated with the launch of a number of additional regional programmes practically disappeared already in 2013.

This year, finding ways to improve the demographic situation once again came to the fore. At a meeting on economic issues, President Vladimir Putin announced different options of support for families with children — provision of places in nurseries, assistance with housing, improvement of the system of social benefits. He also noted that “the possibility to perform future prospects of the program of the parent capital”.

Experts do not deny the importance of economic support for families with children, however, say that it is, firstly, needs to be more serious, and secondly, to be combined with other, intangible measures.

Anatoly Antonov, head of the Department of sociology of family and demography of sociological faculty of MSU, is sure that money doesn’t increase people’s need for children, we need to promote large families. “To have 50 percent of three-child families, we need to get in this direction the whole population from the morning until the evening. Cynical, but need PR having many children, and then television, of course, the most efficient way,” said demographer in an interview with reporters. Besides, in his opinion, the government is making a mistake by orienting its policy on those who are already married, we must place our bets on today’s teenagers and children.

A similar view is held and the Chairman of the Supervisory Board of the Institute of demography, migration and regional development Yury Krupnov. “…We owe all nerepressivnyh means to encourage large families: through the media, benefits, status, taxes, payments to make in our country every girl dreamed to have lots of kids… Because a fifth of all children in Russia for large families”, — he told in interview “news”. In his opinion, “the old formula of a large family with three children is not enough. A new ideal and a new formula — four children in the family.”

As the authors write, “Monitoring…”, the potential of the discussed additional measures of material stimulation “seems to be not very high” and recognize that “to avoid the influence of small numbers of today’s generation of mothers and, therefore, a serious fall in the number of births in the coming years will not succeed.”

Meanwhile, a number of experts believes that the best way to increase fertility is to ensure stability, including economic. “Stability was a major motivational push to increase the birth rate. Demography is growing organically, don’t start and stop in response to a sharp incentives. More important to focus on some narrow measures — it is very important to restore the health of the overall economy, said in an interview with “NEZAVISIMAYA Gazeta” the head of chair of Russian economic University. Plekhanov Ruslan Abramov. — Citizens do not need money from the state, you need to earn it yourself.”

According to the “population forecast to 2035” published on the Rosstat website, in the next 12-14 years in Russia will occur a continuous decline in the number of births (with the exception of 2018, which results in an average variant of the forecast assumes growth).