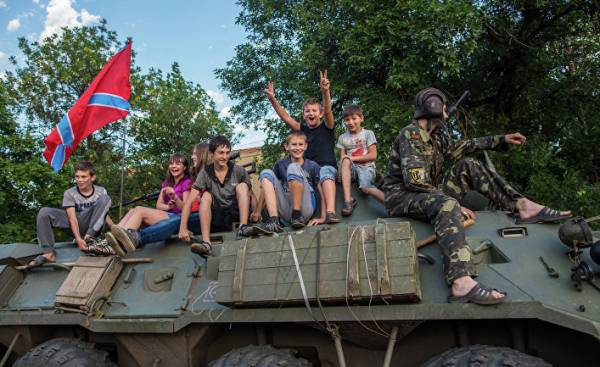 Fighters of the unrecognized “republics” of Donbass are actively recruiting children and teenagers for carrying out sabotage activities on the territory of Ukraine, according to popular public “Luhansk Ukraine” in Facebook. According to available information, in ORDA created whole schools and camps, where children are taught the basics of combat training. “Education” in the style of “Russian world” will affect the psyche of teenagers and what the citizens will get Ukraine, “Apostrophe” in a short interview said military psychologist Andrew Kosenchuk.

“Apostrophe”: What changes occur in the psyche of the children? How are they irreversible?

Andrew Osinchuk: This resource has long been used by all of the Empire — and it’s no secret, including the well-known Hitler youth who fought in the war is much brighter than adults. Man you always need to give myself some kind of social group: to whom I belong where I am? Man constantly asks himself this question and very often not find an answer. And then there is the “opportunity” to join any group. In the USSR, for example, it was the pioneer movement. Not to say that all the changes that are laid in this period, irreversible and reversible but they are hard, because in order to change this structure of thinking, you need a very big stress factor, a shock or a betrayal.

— These children do truly hate Ukraine and everything connected with it?

— They have given, so they feel. The thing is, what information field they are in. Did they get the real information about what is Ukraine? They receive information selectively: one that is profitable. Information about what they eat Russian children and rape grandmothers, but the specific thesis that our armed forces destroyed the peaceful Russian-speaking population of Donbass. They fiercely hate, not because this is Ukraine, but because they are given such information. By the way, this applies not only to children. Information policy of the Russian Federation and those of the satellites, which it contains, very competent. They are actively brainwash people via TV. For example, recently there was news that in one of the villages in the Donbas there is no electricity. They buy generators, and the hours of operation of the generator costs are quite expensive, so, as soon as turn on the generator, the first thing people do is charge cell phones and watch TV. It turns out that the most urgent human need — communication and TV, even a refrigerator. The information field is like a drug: if you have some news, next news needs to be brighter, sharper.

— Independently teenagers in the occupied territories are able to understand the true causes of the military conflict?

— And they just there is no need to understand. The information is supplied so that it already has all the causes, for example, attributed to U.S., NATO soldiers, and the like.

In this case, when Ukraine will return the occupied territories of the East, how to rehabilitate these children?

— First, it is necessary to restore dialogue. You will need to give them alternative information, to talk about values. You need not to devalue them, not to humiliate, but to give them the respect and dignity. That’s what none of the children is not enough. Give them a choice of options: educational, sports, cultural. In order for the child to be able fully to realize themselves. Now it is no choice is not given, forcing forced to make a choice against the “junta”. If the children give the normal range, the conditions for the implementation and capabilities, they all will be well. Can’t really say what it needs, only children, and adults lacking, but children can still be saved, but adults have not, and I don’t even know what to do with them.