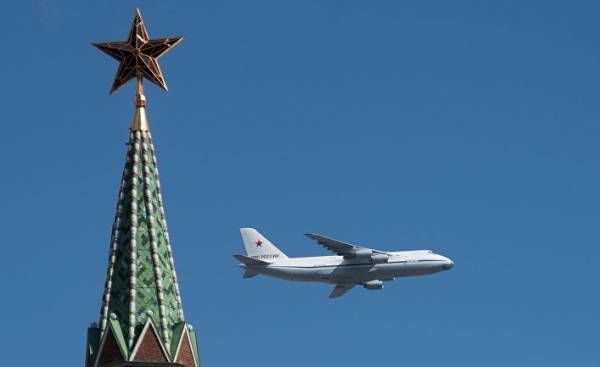 Despite the appearance of the A400M, the French forces largely depend on large transport workers of An-124, which are rented through the foggy intermediaries and two-thirds owned by Russian companies. The Deputy françois Cornu-Gentille (François Cornut-Gentille) has sounded the alarm.

The Deputy françois Cornu-Gentille threw a stone at a military morass, presenting 28 Mar Committee on Finance of the National Assembly a report on the strategic transport in the French army. It was indicated two major conclusions. First, the appearance of the A400M does not negate the use of French armed forces large Ukrainian transport An-124, whose ability to five times higher than the European aircraft. Secondly, France is in a state of dependence on Ukraine and especially Russia. Two dozen available in the world An-124 owned by Ukrainian company Antonov Airlines and the Russian “Volga-Dnepr” (private) and “224 flight detachment” (state).

From the conclusion of the MP out in a cold sweat. “In fact, Russia and Ukraine control the transport of our forces in external operations, the report says. Over France loomed a real sword of Damocles”. In the hands of the Kremlin were dangerous weapons that Vladimir Putin has been floated, I’m sure the Root-Gentille: company “224 flight detachment” has stopped cooperation with France in September of 2015, i.e. just a month after the termination of the contract for the supply of Russia’s helicopter carrier “Mistral”. “Providing An-224 becomes a diplomatic issue, — the Deputy emphasizes. — Further deterioration of relations with these two States [Russia and Ukraine] can completely paralyze the possibilities of the French army in the field of air transport. Despite the loud statements, our strategic independence — virtual reality”.

The report of the European defence Agency and Agency NATO support and procurement confirms this dependence. This document was sent out in June 2015 leadership, responsible for strategic transport in the French army. It specifically is talking about the “political risk prevent the provision of services because of dependence on the resources controlled by Russia.” The fact is that although we are talking about the Ukrainian aircraft, “98% of spare parts come from Russia, and the remaining 2% — East of Ukraine.”

But what is this dependence, if France now has 11 aircraft A400M? To deal with this, it is enough to make a comparison. Payload of 100-120 tons of Ukrainian aircraft far exceeds 25-30 tonnes of European. In addition, the An-124 fits 11 standard sea containers, whereas in only two of the A400M. “To replace one hour of flight An-124, will need five hours of flight of the A400M,” — says Francois Cornu-Gentille.

Thus, the Ukrainian freighter is indispensable for the transport of heavy cargo (armored vehicles, helicopters, guns Caesar) from France for external operations. Operation “Serval” in Mali in 2013 allows you to get a good idea of the scale dependence: in just two months, the air force chartered a 115 flights of An-124 and 47 — the Il-76 (Russian freighter more modest size than the An-124) and 7 flights of An-225 (the largest transport aircraft in the world, exists in a single copy and belongs to the Ukrainian company Antonov Airlines).

Whatever it was, these aircraft depends not only the French army: the same goes for European (including German) forces, as well as industrial enterprises in the transport satellites (Thales Alenia Space, Airbus DS), helicopters (Airbus Helicopters), power equipment (EDF, Areva) and weapons for customers in France. Launched from Kourou satellites also bring on “Anton’s”.

The dependence of overlap and complexity with the lease. French forces gain hours of flight “Anton’s” on two well-defined channels. The first is the NATO SALIS contract, which allows the top ten countries of the Alliance to purchase prepaid hours (300 hours in 2017 and two in 2018 for France). Used for these purposes, An-124 based on in Leipzig. The second channel for France — agreement with the French company ICS for the period from 2015 to 2018 and it was committed to Charter depending on the needs of the An-124 and Boeing 747 freighters.

Army and in particular the operations support Centre and transport can use both these channels to get precious flying hours. However, in any case, the final performers are the same Ukrainian and Russian companies. To SALIS involved in aircraft and Antonov Airlines “Volga-Dnepr”. ICS involves only Ukrainian company.

French MP not like either of these contracts. In the framework of SALIS accommodation of planes in Germany “increases the cost of operations.” To our knowledge, the additional costs for the army to reach 50 thousand euros per flight. There is another problem: while NATO SALIS agreement, most of the orders received “Volga-Dnepr”, which increases France’s dependence on the Kremlin. In 2017, the Russian company will take over 225 of the 300 pre-paid France hours.

The contract with ICS also does not seem to françois Cornu-Gentille perfect solution. Pay some tactical operations is the army’s subsidiary ICS in Singapore. The Deputy did not dispute the legitimacy of the process, but asks, “why ICS has opened an office in Singapore.” Not clear to him and “the motives of the Ministry of defence to work with ICS in Singapore.” The company said Challenges that competition from offshore forcing her to use a branch in a country with a low tax on businesses (17%), and that she has concerns about difficulties with the Russian payment services providers in connection with Western sanctions against Moscow.

In addition, françois Root Gentille notes that former chief of staff of the army’s transportation center recently became the Deputy head of the ICS, which may indicate a potential conflict of interest. The company said that “adviser on defence issues,” was hired by all the rules: military retired and passed the hearings in the delegate fee. In any case, the MP acknowledged that the problem is wider than only ICS. “ICS may be merely a scapegoat in a shaky system,” he said.

In fact, a small world of military providers in the field of strategic transport is reminiscent of a basket with crabs, than a well-oiled machine. All against all, in a fight in the saloon. Daher filed a protest against the signing of the army contract with ICS in January 2015. Strategic Airlift Support (SAS), the former Deputy head of the ICS Gregoire Lanza (Lanza Grégoire) accuses the ICS in the falsification of documents for landing in France had not the permission of the Il-76. In ICS I assure you that you are a victim of disinformation campaign of the Russian competitors and SAS, not forgetting to go on the offensive on rivals: in 2015, she filed a complaint over the signing of a transport agreement with Pegasus special forces Air Drop, which was created by former soldier Pierre-Louis de Lavi Rand (Pierre-Louis Lavie de Rande).

With the end of 2016 in the closed world of a military transport is an anonymous report about the privileged ties between some companies and their customers. “The existence of this dossier and its dissemination of talking about the poisonous atmosphere,” lamented françois Cornu-Gentille. He could not “confirm the veracity of documents” and “in connection with the risk of manipulation” did not specify the passages of them in his report.

To clean these Augean stables, the MP proposes a system of certification of transport companies, as well as regular audits Office of intelligence and security of defence at Ministry of defence of the country. As for the dependence of France on “Anton’s”, he finds it necessary to consider the possibility of acquisition by France of large transport: An-124 and the American C-5 Super Galaxy or paramilitary modifications to the A380 and Airbus Beluga.

According to our information, the European defence Agency is considering the purchase of a C-5 Galaxy: these planes are close to the characteristics of the An-124 was developed by us Lockheed Martin and adopted for service in 1969. In 2014, the USAF received their upgraded version of the Super Galaxy (C-5M). USA and Lockheed Martin agreed on the sale of the upgraded modifications at price from 85 to 115 million dollars. The aircraft can be transferred for a nominal amount, as most of the funds required to upgrade them. The Americans even offered for free to give twenty-three C-5A, an older version of the Transporter.

But the discussion went in early 2015, before being elected President of the United States Donald trump. Subsequently, the renegotiation of the NATO contract of lease of An-124 in the end of 2016 has led to a further increase depending on the company “Volga-Dnepr”, which now provides three-quarters of prepaid hours. And given the rhetoric trump of confidence about the C-5 is no more.