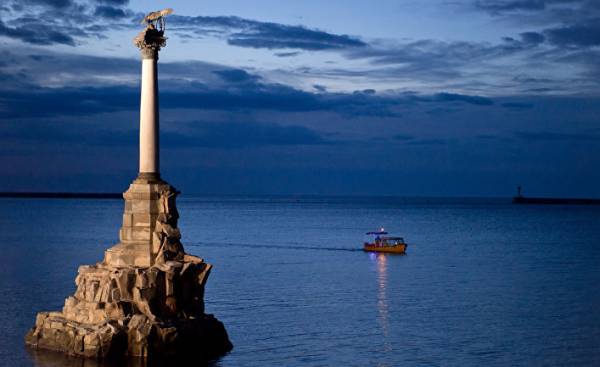 Sebastopol — Faith, selling cotton candy on the waterfront of Sevastopol, not a good evening.

Over the past hour from seven to eight there were only three customers, whereas on a good night it, in her own words, passes through the counter 10, 20 servings.

On the veranda of a fine hotel “Sevastopol” where visible store of the Faith, occupied only two tables out of ten.

Behind one sits a correspondent for Jyllands-Posten, eating chicken Kiev, and for the other three Russian-speaking business people for an evening Cup of coffee.

In a beautiful Bay runs three-quarters empty tour boat. Because although, without a doubt, worth the time to admire the sunset, enjoy the views of this historic port city attracts fewer people.

Of course, even before the peak season in this black sea Peninsula is in August, but still with the number of guests so far everything was going too well — not only in Sevastopol, but the entire sun coast of Crimea. This is confirmed by all from young to old.

“People have no money, so they stay home. Try to come out and look at the train station. It is empty. This never happened before”, — said Boris drones, which has worked for many years in the local tourism industry.

This year compared with the 2016 season in the Crimea plan to go to 30% less Russians, according to a survey conducted by the industry organisation Association of tour operators of Russia.

In the past year, came to 5.6 million visitors, which is close to the level of 6 million in 2013 — a year before Russia annexed Crimea. Early resorts were visited mostly Ukrainians, but now they stay home because of political contradictions and the sharp rise in prices.

“In 2014, prices tripled, so that no one in Ukraine can no longer afford to come here. This is pure arithmetic,” — explains Oleg Petrov, a former Navy officer, who now works in the tourism sector.

The officials are also concerned about the developments.

“The trend is that the tourist flow to Crimea is reduced,” said Andrew Rostenko, the Governor of Yalta, the largest resort on the Peninsula, the local news agencies.

The decline must be a cause, and, according to the Governor, Rostenko, this decrease is caused by problems with infrastructure, including due to the fact that the new terminal at the airport of Simferopol will be opened not earlier than in 2018.

Others point to the fact that the quality is behind the rising prices. Although Crimea and offers beautiful nature and many historical attractions, bumpy roads, shabby hotels and bad restaurants spoil the whole picture.

The vote, conducted by the Russian state news Agency RIA portal, dedicated to the Crimea, showed that 70% of respondents believe that prices for accommodation and food in the region has risen too high.

In Soviet times Crimea was little competition, but in the last 10-15 years is flourishing and attracts many foreign tourists around the southern Russian region of Sochi city in 2014 took Olympic winter games.

According to a survey of the analytical center “Levada”, 8% of Russian think that to go on vacation in Sochi, whereas in the direction of the Crimea look and only 4% and another 4% are thinking about foreign destinations.

Even the locals there are those who would like to spend a vacation elsewhere.

“If I could choose where to spend a vacation, I would never have chosen the Crimea”, — said Oleg Petrov.

There are, however, experts believe that the improvement of the infrastructure of the Peninsula in the coming years will change the picture.

“Crimea less well-kept than Sochi, but not so expensive. The competitive situation for Crimea is positive, as Egypt is closed for Russian tourists, and the position of Turkey is very unstable,” says Mr Brewer, an expert of the Russian Academy of national economy and state service under the President of the Russian Federation in Moscow.