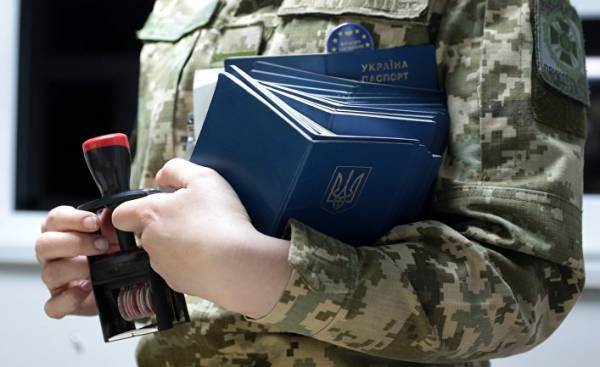 Terrible things are happening on the border with the Eurozone. Statistics on the movements of Ukrainian tourists at the upscale resorts of France, Italy and Monaco classified. I have already raised the topic of the mysterious, frightening to shiver Kiva’s disappearance seven hundred thousand patriots. Border statements they are, and visa-free travel — no. The authorities ignore the problem. But we took a chance to investigate the topic.

For this journalistic feat feat me personally an example of my sister-bloggers. At the height of tourist season, these courageous people went to Putin occupied the Crimea, where they had sent shocking stories. Deserted beaches, where at night hunted by cannibals and stray dogs. Fallen during the occupation, the Crimeans picked up the crumbs at gas stations. The atrocities of the bloody gebnya night and disappear hundreds of patriots who are loyal to the ideals of the Maidan. And only a trail of blood stretching from the house of another victim to the local police station, recalls the innocent ruined souls. In spite of the mortal danger faced by Ukrainian bloggers, every minute risking their lives for the sake of truthful reporting from the Crimea, the number of people willing to see the truth increases. Multi-kilometer queue at the checkpoint Chongar, inspired by the FSB, testify to the disgust of Ukrainians to the rest of the invaders. They just want their eyes to be convinced of justice of the European choice made three years ago someone on the Maidan. Come back literally black from a grief, for a long time can not depart thump, and then slowly start to move away, to tell about what he saw, periodically checking processed cheese for the presence of wiretapping.

So, what have I done? In Crimea not yet go, but to investigate the mysterious phenomena on the border with the EU would have. As soon as he began to dig: Bach!

Mysteriously was removed from the game the person holding the most complete information about visa-free disappearance of Ukrainians, head of the Border service Nazarenko. Everything is suspicious: he saw a naked female breast on the briefing Lukashenka and Poroshenko in AP, lost consciousness. Pulled by the arms from the hall, was sent to the intensive care unit. Suspicious? Stopudovo!

Then during the day the commander in chief signed a decree on the forced resignation of the chief of the border guards, gave him the title of General of the army, to not talking too much, and then introduced the new head of the Border service. Remarkable efficiency! For comparison, an example with the head of the National Bank of Ukraine Valeria Gontareva. In April of this year she resigned, and since then nobody even bother looking for a new head of the main financial institutions of the nation. And in the case of Nazarenko for a few hours or a wave.

Now the most important thing: randomly the leaked secret statistics on occupancy rates of visa-free trains “Kovel-Hill.” No one in Ukraine does not know how many tourists went to Paris to eat croissants. Supreme commander casually mentioned about a hundred thousand of stalkers with chips, benefited from the opening of the portal in the Eurozone. And biometric passports, according to the guarantor, five million patriots. Since then, silence. The main border guards apparently tried to tell the truth about the events on the border, but he slipped female breast, have provoked a hypertensive crisis and quietly shoved into retirement. And then there is the “train of death” in Poland. Terrible statistics. From June 11 (the date of introduction of a visa-free regime) to 25 July in Poland came to 2.7 thousand tourists, and returned only seven hundred! That is, I went four times more than back! Not to recall the sensational story about three thousands of Georgians who vanished without a trace in the Eurozone. Yes there Georgia! Here we are talking about millions of patriots, whose fate is unknown.

Analysis of sites dealing with hotel booking (any where “everything-smokingi”), has revealed yet another anomaly. Usually people leave their comments on the pages of hotels. Such as “was the hotel shit, spoiled vacation, food sucks, the beach is far away.” Or: “just wonderful, the staff courteous, enjoyed it, more will come”. Here’s the weird thing: there are no reviews of Ukrainian tourists. No, Carl!

Some Muscovites, pitertsy and citizens of Nizhny Tagil. Perhaps I have not been able to find. But spent many hours studying the highest-rated five-star hotels, where you have to stop the patriots of the nation. Empty! Found only leader of the socialist party Kivu, which was just about to fuck some man in Greece, and as reported in one of the social networks.

Remember how prior to the introduction of a visa-free regime in all forums discussed the most optimal routes for the production of croissants in Paris, oysters, Czech beer and Iranian caviar. Tens of thousands of bloggers, designers and activists that collects on the imager in the ATO area, shared their plans to visit the Eurozone. More than two months have passed since then, and no photos. Monitoring Facebook has allowed to establish that the most frequently mentioned Berdyansk, Zatoka, Odessa, Kherson, Yalta, Alushta and Antalya. No one post pictures from the hotel Negresco, the promenade of Cannes and other traditional places of the Ukrainian Patriotic public. Accidentally just burnt up the opposition Rabinovich, the overseer of land in France, price of 12 million dollars.

Sure: Ukrainian tourists in the Euro zone is penetrated, but then, apparently, began anomalous phenomena. Undoubtedly, involved the Kremlin, which was to harass patriots on the spot of their European vacation. And no more intelligible versions, and can not be. Judge for yourself: for three years we carried the country for a visa-free regime, which was to play the role of “Holy Grail”. Well, there will be legless to walk, clumsy to fly, and Hanna hopko finally learn to choose bras. So much question whether. for the sake of a visa-free regime in the Euro area have to be filled with Ukrainians, five-star hotels. But they are not! Why, why there are “moskali”?!! At them Putin and dictatorship! We have the same complete freedom and the war with Russia. You know the most popular Ukrainian tourist hit? Tours to Albania! People are enticed by a plate of seafood for five euros, and then… Better not to continue.

Sister persuade me not to go into this topic. Say that many bloggers have vanished, trying to uncover the mystery of the disappearance of Ukrainians in the Eurozone. But the example of the Crimean stalkers, fearlessly, spending weeks and months in the occupied area of the Peninsula, inspires me. Expect startling discoveries! Or wait…