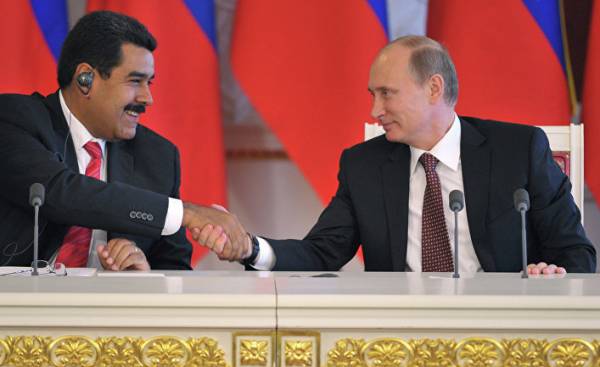 While the hands of the Venezuelan guards killed participants of the street protests, Russian President Vladimir Putin said yesterday by phone to his counterpart Nicolas Maduro that “admire the courage” with which he rules the country for the sake of “stability and peace”.

This is the communiqué of the Ministry of foreign Affairs of Venezuela. The document mentions the condemnation of Putin “political efforts, both inside the country and abroad aimed at undermining the constitutional order of the Bolivarian Republic of Venezuela”. As noted in the communiqué, the Russian President stressed that “only the Venezuelan people can decide their fate.” A telephone conversation took place on the initiative of Caracas.

However, a communiqué circulated by the Kremlin, much more concise. It says that the conversation took place, as Maduro wanted to inform Putin about the measures being taken to “normalize the situation” in Venezuela. As the press service of the Russian President, during a telephone conversation the two heads of state “exchanged views on cooperation” between the two countries, especially in the area of “implementation of joint energy projects.”

In the course of experiencing Venezuela’s crisis, Putin, and Maduro has several times talked on the phone. Last time they met in Istanbul in October 2016 during the world energy Congress. Moscow and Caracas to maintain close political and economic relations since the presidency of Hugo Chavez.

According to Putin, Venezuela is the second largest trade partner of Russia in Latin America. Moscow has had with the South American country’s energy projects, provides loans and selling arms to them. The Minister of economy and Finance of Venezuela Ramon Lobo (Ramón Lobo) was on a visit in Moscow to prepare a meeting of Russian-Venezuelan intergovernmental high-level Commission, to be held in the Russian capital in October.

Russia has repeatedly condemned foreign “interference” in internal Affairs, without naming the specific country. Russian authorities warned about the consequences incite “coup” aimed at the overthrow of the “legitimate authority” Maduro. Similarly, Moscow has criticized those who have contributed to the overthrow of dictators like Saddam Hussein and Muammar Gaddafi, and are now trying to do the same against Bashar al-Assad and Kim Jong UN.