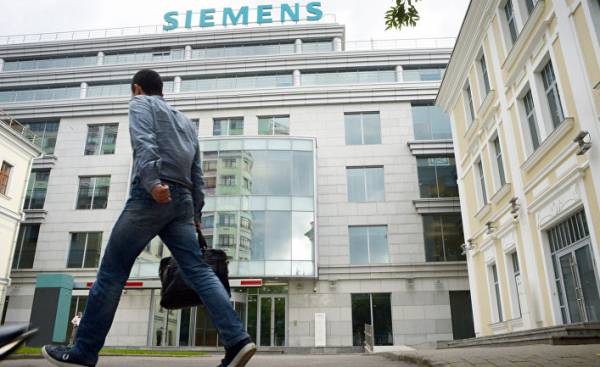 Turbine scandal made the German giant in the headlines. Now everything they write: “Siemens” out of Russia. Oh yeah, because the German company was cruelly deceived by the local authorities! And partners — in the face of “Power machines” belonging “Severstal”. Run Siemens run!.. But is it possible to escape from yourself? This question in the late nineteenth century were interested in Freud, or rather Freud, as his name is all over the German-speaking world.

What turbines powerful old Freud, you ask? But isn’t he saying that all our problems come from childhood?

Let’s get together with “runaway” Siemens will follow the spiral of history down.

Last fall, we discussed in detail the history of the German company, got on primitive lure (“”Siemens” in the Crimean trap”): “Siemens” built 4 powerful turbines for CHP non-existent in Taman. As it turned out, the customer had originally planned to install them in the Crimea. Crimea for “Siemens” — a taboo. Any violation by the concern of international sanctions will result in penalties, which lost a couple hundred million euros from the turbine.

But Moscow’s partners are not considered the concern concern worthy of attention: all 4 power units are already in Sevastopol.

In the end, Siemens has taken unprecedented steps. In an official statement the company said that breaks all commercial relations with partners in Russia, working with the state order, suspend the operation of all licensing agreements with the Russian copartnery and begins an internal investigation against its staff implicated in the scandal. By the way, in the opinion of the engineer from Siemens themselves of the turbine unaccompanied simensovskih software, technical support and staff, just expensive scrap. Most likely, they will not even be able to enter in the system.

And who belonged to the Russian “Power machines” more recently? Right, the same “Siemens”, on equal footing with “Interros”.

And what “Power machines” in a historical context?

This is the famous Leningrad zavodysche “electric power”, the smithy of proletarian consciousness.

What is “electric power”? It’s… “Siemens”. “The date of Foundation of the plant is considered to be 1898, when the factory became part of the joint stock company of Russian electrotechnical plants “of Siemens and Halske”,” according to his biography.

Siemens, say, out of Russia?.. Yes, Siemens is experienced in the Russia of the Romanovs, Lenin and Stalin (talked among themselves exclusively through simensovskih apparatus), all the others and, of course, survive the moment.

The more that Russia in the turbine context is now no longer in the top. 18 simensovskih creations have long plow on Russian energy around the clock, Four, as you can see, married badly, but new orders not yet in sight.

Of course, the current scandal will repay. In fact it is little known, but very important political component.

The ill-fated 4-turbine order for a non-existent Taman — the brainchild of then-industry Minister Sigmar Gabriel, leader of our social Democrats. Now he is our foreign Minister and a third person in the party. It turns out that if the Russian authorities someone and Nadur, promising not to transfer the turbine to the Crimea, it is the person of Gabriel.

And in September, I will remind, in our country parliamentary elections. The social Democrats now, according to polls, are at around 20% and falling further. At the same time, the Christian Democrats led by Merkel went on a sensational figure to 40%.

Turbines could be imbedded Gabriel and with him his party for another couple of paragraphs — and in the end just the SPD will not be included in Grand coalition and will not participate in the formation of the government of Germany for the next 4 years.

For whom is this strike? For Siemens? For Germany? No, for Russia. Because social-Democrats are loyal supporters of “real policy”; if any of the major powers and beats in Germany and Europe for the weakening of anti-Russian sanctions, it is the SPD and Gabriel personally.

The loss of such an ally for Moscow it is just lights out! Especially because of such nonsense as the lighting of the Crimea…

So the scandal dies down, and “Siemens” from Russia will come. Because of themselves, according to Freud, sometimes it can get everyone, but only in the figurative sense of the word.