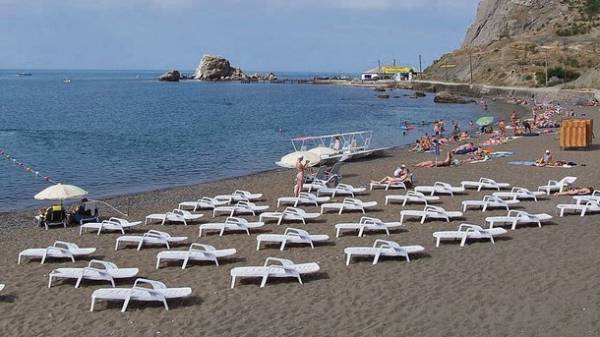 The fourth holiday season in Russia-annexed Crimea is expected the same failure as the previous three. It is recognized by the Russian “government”, nodding to the mythical blockade of the Crimea from Ukraine. It is now breathing down the Peninsula, found “Today”.

THE FACTS AND FIGURES. It seems that Crimeans will have long forgotten about the annual 6 million visitors, who gave a solid earnings residents of coastal regions. Now, in the midst of season 2017, on the beaches people not a lot. Even according to official Russian data, tourists are expected this about 1.5 million people, or 15% less than a year ago. But this figure is clearly too high.

As told to us the Director of the Center of development of tourism of Ukraine Volodymyr Tsaruk, the former “all-Union health resort” is now losing to Turkish resorts in almost all indicators: service level, transportation problems, and lack of system “all inclusive”.

“Between the Mediterranean sea in Turkey and the Black in the Crimea — a big difference, the first is much warmer. Plus even renovated hotels in the Crimea with the Turkish incomparable quality of services at comparable prices, told us Tsaruk. — Moreover, in comparison with last year, the cost of tours in the Crimea has increased by 20-25%. Most affected the West coast of the Crimea, where there are few 3* hotels or 4* and went on vacation 80% of Ukrainians. It’s hard to say how many Ukrainians actually went on vacation in the Crimea, but very few of them. Local statistics include everyone who crosses admingranitsu with the Crimea. It can be people going to their relatives, but not with the purpose of tourism. Before the annexation of the 6 million tourists Ukrainians were more than 70% (4.3 million people), then replace them in a moment by the Russians, of course, fails. Ukrainian travel agencies are prohibited from selling tickets and organising tours to the Crimea. Foreign tourists also little because of direct air links with the Crimea”.

Pensions, he said, fill out the Russians at a reduced trade-Union permits for 10-20% of the cost. That is filling the hotels is not market methods.

Dismissed the so-called “Minister of resorts and tourism of Crimea” Sergey Strelbitsky announced to local media, the cost of holidays in Crimea. According to his calculations, a week-long tour for two with flights from Moscow to Simferopol and back with accommodation in a standard room of 3* hotel will cost $1080. The same holiday in Turkey with flights and all inclusive service is worth $650. To get to the Crimea by land through the Kuban and on the ferry to Kerch three times cheaper than by air, but then the road will take 2-3 days one way.

With 2018 Crimea will rise in price even more, as it will effect the recently passed law on the levying of tursbor on all entering. The fee will be 50 rubles ($0.83 or 22 UAH) per day with each visitor, except children. That is, for a week of rest will additionally have to pay almost $6 a head. It is planned that the money will be spent on tourism development.

EXCURSIONS AND PEOPLE. While in the Crimea is relatively cheap compared to foreign countries, only the tour — from $5 per person for Hiking review to $35 for boat trips or bus tour wine tasting. The most popular city of Sevastopol, where it has many historical monuments and museums. According to the authorities of the city, the number of tourists remained at last year’s level and amounted to more than 600 thousand people visited The place — reserve “Chersonese” — 340 thousand people, the Museum of defense and liberation of Sevastopol (panorama, diorama) — 200 thousand people.

But tourists say many cases of outright fraud tourists. As told “Today” krymchanka Mila, Gubenko, her mother with her friends-Muscovites went to rest in Alupka. “They decided to go on the tour, chose two: on a boat in the night Yalta and Simeiz to the Observatory, says Mila. — Both 600 rubles ($10) per person. Imagine the surprise when instead of a boat overlooking the night lights of Yalta on the way back they put in a bumpy minibus and taken to the gathering place. There was an unpleasant surprise and at the Observatory, where the tour paid people demanded a separate entrance fee. They were told that for the money they walk through the Observatory and they will show “the space movie”.

“In Crimea everything is so bad and disorganized because of a pathological greed Crimeans themselves employed in the resort and entertainment area, as well as many local and visiting officials, who can’t organize without taking anything,” explains Facebook in a local journalist Alexander Dremlyuga.

And Kievan Mikhail Yurchenko for more than 20 years vacationing company with tents on Cape Meganom Sudak told us that four years does not go to the Crimea because of Patriotic reasons: “it is a Pity a little, but we discovered many other beautiful places in Ukraine.”