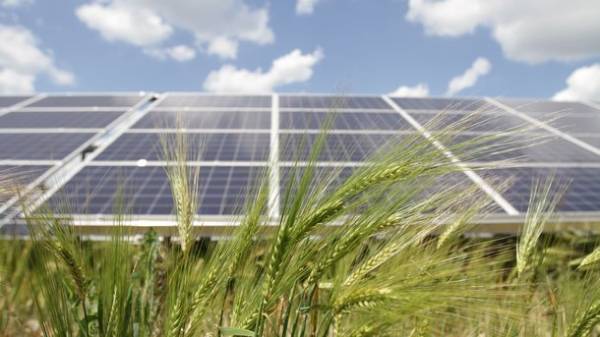 The whole world and our country in particular, is committed to the development and use of renewable energy sources. There are several reasons: first, the sun, water and wind is inexhaustible and available resources, and secondly, they are environmentally friendly and safe, and third, they contribute to the achievement of Ukraine’s independence from imported fuel.

The correspondent of “Today” visited the construction of solar power plant in the village of Trifonova of the Kherson area is about 30 hectares of the old collective farm pastures, which turned into a high-tech facility, harvest sunlight and converts it into alternating current, which then feeds the flats and houses. 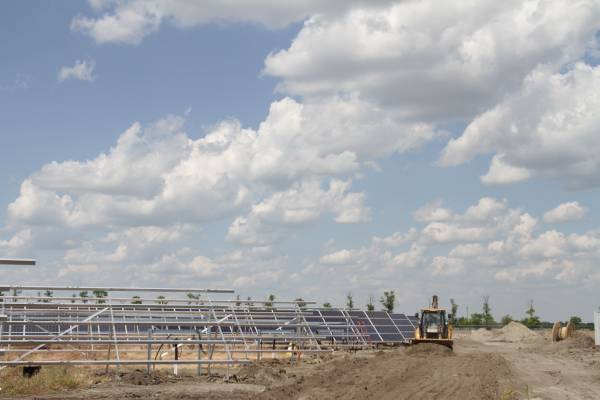 “Skeleton”. Aluminium is more expensive than black metal, but much more reliable

Speaking of solar, we mean the photoelectric effect — the process by which a substance emits electrons under the action of light or electromagnetic radiation. The year of the beginning of the era of solar energy is considered to be 1883: it was then that the American Charles Fritts created the first photovoltaic solar cell. And the basic laws describing these processes appeared even later — at the turn of XIX —XX centuries, when physicist Alexander Stoletov established empirical relationship between the magnitude of the photocurrent and light package incident on the sample. And only in 1905 albert Einstein developed the General theory of the photoelectric effect for which in 1921 received the Nobel prize. These studies were among the first in the history of new science — quantum mechanics.

The principle of the photoelectric effect is simple: particles of sunlight (photons) hit some kind of surface such as metal, and then share their energy with electrons, forcing them to leave their orbitals.

Then turn on the photovoltaic effect: when the bombardment of photons of certain substances (semiconductors like silicon crystal), the electrons absorb energy, are released and in free form moving under the action of internal electric field to the anode. Positive charge goes to the cathode. All of this is

again science called “photovoltaics”, which deals with the aspects of turning sunlight into electricity. Despite the apparent simplicity of the process, studies last to this day: scientists were testing different materials and create new ones, to get more electricity from a smaller area. 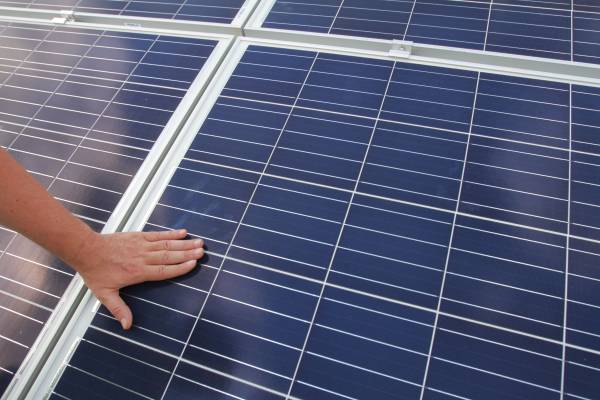 Trifunovska solar power was once a huge pasture, where in Soviet times pastured cows. However, at the time of site preparation it was abandoned, overgrown with prickly weeds. Prior to construction, says the project Manager from the General Contracting company VIRA

Andrey Sushko, pasture and even resembled a huge swamp. To drop off panels, building materials and other equipment, had to repair the road, otherwise the wagon could not pass. Now here is the “grazing” symmetrical rows of solar cells.

The area of the future station, surrounded by a fence. Behind the gates — trailers protection and builders. In front of them slept two puppies, a boy and a girl. They were born right here, with the start of construction, and so it remained: guard the territory, filling the steppe leaping barking, only seeing strangers. Behind them, under the open sky — the temporary warehouse materials.

A little further on is a bright structure — a future control room. It is empty, the bare walls, but soon it will be filled with server racks and computers. 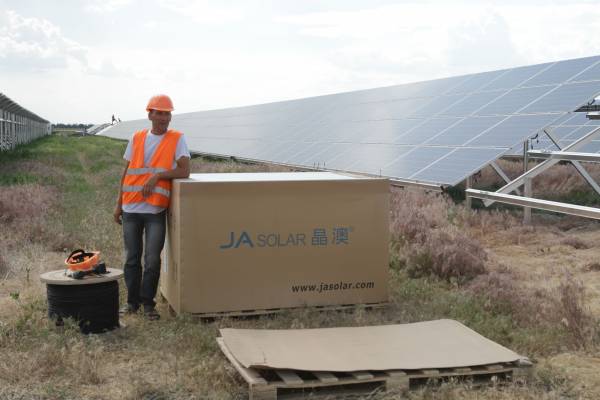 Panel. Came here in such pallets

The future station is the land, 30.6 hectares of land that we have rented for 25 years, — says the Manager of the construction project Trifunovski SES Nikolay Trefilov. — Installed capacity of 10 megawatts, which we will issue to the substation “Trifonovskaya 150/35/10 kV”, located on the opposite side of the village of the same name. As the main equipment are using solar panels the production of JA Solar. This company is among the five leaders in the production of panels in the world by Tier 1 rating from Bloomberg. The panels came from China more than a month at sea, delivered them to the port of Odessa in 45 containers. Here they were brought by trucks, 45 trucks, respectively.

Kherson region and this particular area was chosen for several reasons: first, it is one of the highest levels of insolation (irradiation of the earth’s surface by sunlight) in the country. Second, Trifonovskaya SES for DTEK is a pilot who strategy development should start operating in 2017. Because the company purchased a turnkey project from a French company BETEN INGENIERIE SAS: those who have already received land acquisition, agreed with the local authorities and carried out preparatory work. Hence the unusual name of the legal entity — “Trifonovka energy” — in the French manner, instead of the usual English “energy”.

DTEK’s investments into the project will amount to 8.1 million euros. Specialists of the company do not exclude that development of the following projects will be done from the start on their own. 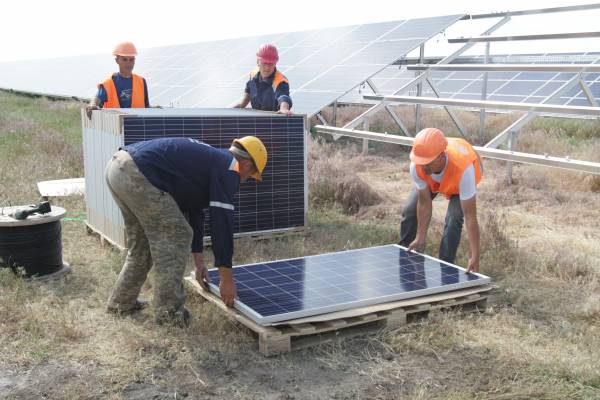 To build solar power, you’ll need piles and metal constructions. First, a special machine “pushes” the pile into the ground, then mounted, aluminum construction — they are more expensive than those that are made of “black metal”, but better than, for example, a 50-megawatt station in England, which was visited by the specialists of the company: no rust and minimal wear.

After preparation you can put the panel, than doing tan to black workers in hard hats and orange vests. First unpack the pallet 30 PV modules. Then from a vertical transport position (rigidity ensures the aluminum frame, so the panels are driven “on the edge”), they are stored on pallets in a horizontal form, checking integrity. Usually, if there is no visible damage, FEM ready to use on 99.9%. Then they are mounted on the substructure, which is already exposed on all measured and ready: the slightest deviation will lead to the fact that the panel will not fall to its place. 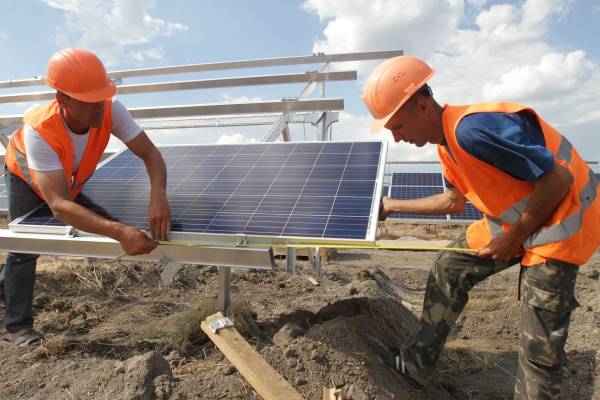 Installation. Deviation will lead to the fact that FEM does not take the place

The installation is carried out by four people. They deftly transferred the panel on the “table” is the Assembly of the 40 panels of 4 meters in height (this is the optimum location for the region), put it and fix the aluminum clip-crabs, then go for the second one. It’s just a matter of minutes. The first row, by the way, tightened by hand, so, just kidding guys, they know exactly how many bolts tightened by hand. The second panel set, carefully measuring the distance from the first to create a gap, which will reduce the windage of the whole structure (simply speaking to the wind blew). 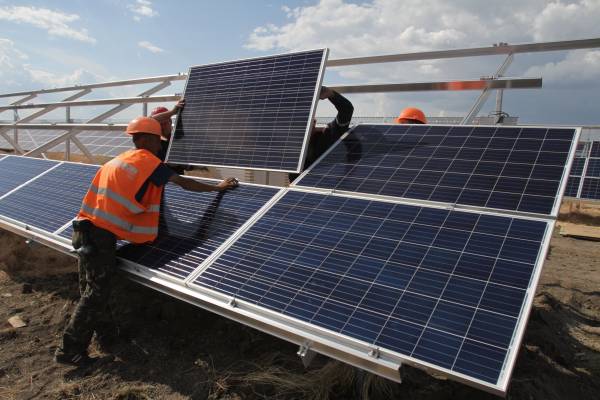 With gaps. So reduce windage — the wind blew

Next — connection. It all depends which system you’ve chosen. Previously, the majority of industrial solar power plants have used the system, providing installation of Central inverters (inverter — a device to convert DC to AC used in conventional network). And small farms strigulae mounted inverters (chain), which is processed with the current small area. Now technology stepped forward, and the service stringbag inverters cheaper and more convenient with the same efficiency.

— In China stringbag inverters a year and a half ago built a station with a capacity of slightly more than 1 GW — emphasizes Nikolay Trefilov.

On Trifonovsky SES is also used strigova system. After the installation of the panel mounted trays, DC cables, each of which is labelled with a table and to which string they are going. 40-panel table consists of two strings, each of which is 20 panels, connected together in a serial chain. Extreme outputs already connected to the cables leading to the inverter, is used here strigulae inverters manufactured by ABB, which was manufactured at the factory in Italy. One such connect 10 strings, that is five tables. The inverter consists of three cabinets: first connect the DC cables, the second is actually the third inverter and produces 0.4 kV AC voltage to the step-up substation of the power collection. Step-up substations there will be eight combined in the two rings (will not stop the station in case of failure of one substation). They direct the current at the main substation which already outputs it to the external grid.

One panel produces 270 watts of power at face value. In fact, it’s three 90-watt light bulbs. To power one household, you have 12 panels so that one “table” can support from three private houses. Now Trifonovka equipped with 17 thousand panels. A total of 37 thousand. On the day there are mounted from 200 to 1000 panels, however, can and 2000, only preparatory work was done.

All panels are oriented along the line of the sunrise with a slope angle of 30 degrees. The most effective season for solar power, by the way, it’s not hot summer, when the batteries get warm, even now I do, and I understand that it’s easy to scramble eggs. And, of course, not winter when they are covered with snow, and the sun hangs low on the horizon. The best “harvest” the SES will give in demi-season — when there is great heat, but the sun is in the Zenith. 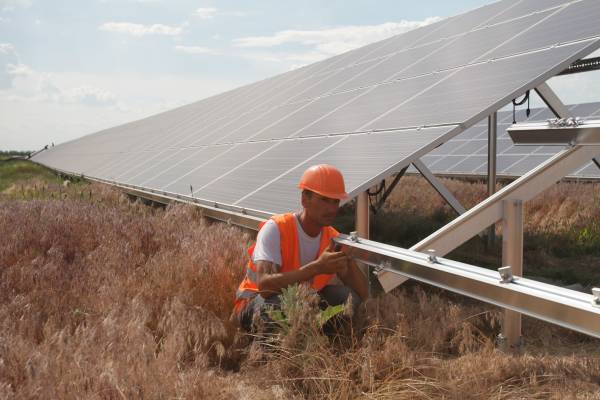 Check. Everything was adjusted at the stage of mounting, but extra eyes would be good

While under construction, the weeds slowly but surely win back their territory before preparing their Eqs. Later, when this is all over, there will drive self-propelled lawn mower and cut the grass. Meanwhile, in Britain the role of the lawn mower do… sheep.

— There is in Ukraine, — says Trefilov. — I have a photo with onemegawatt station in Zaporizhia region, there started a flock of sheep, it goes and eats grass.

Here will do without sheep. However, animals on the station enough — besides dogs, there are rabbits (one three days hiding under the panels from foxes) and birds.

Archaeological finds in the construction was not. Well, not skip, the builders laugh, remembering the sad state of the site before construction

It could be worse, says Trefilov. We watched one site, a former military unit of air defense, there caponiers and the forest with a powerful centuries-old trees. The equipment has already been pilfered, but that is in the earth, nobody knows…

— Before construction on the territory of military units first come the representatives of gschs, the engineers, and then takes up Sushko. 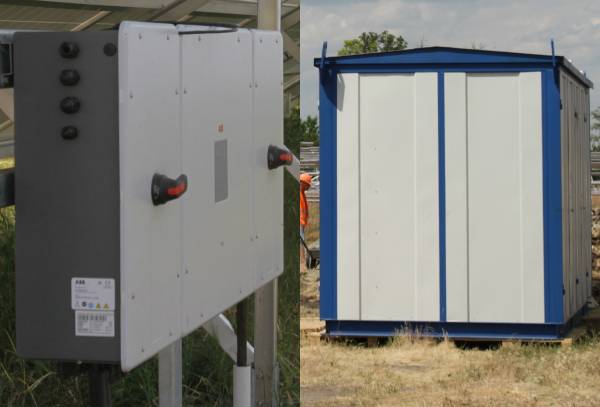 The inverter and substation. The basic elements of “harvest”

By the way, all equipment other than panels and inverters, Ukrainian. Aluminum construction make in Brovary, substations collect power

There will be two roads: one is circular, the second — on the center to provide access to the substations. To avoid damage to the fertile layer of the soil, they are first rolled, then lay the geotextile, then covered with gravel. After the end of the lease term the materials will be removed, textiles will roll us, and the earth will remain suitable for agriculture. But that’s a ways off: first, the station will complete, then everything will connect, and the net energy flow into the system to feed at home.