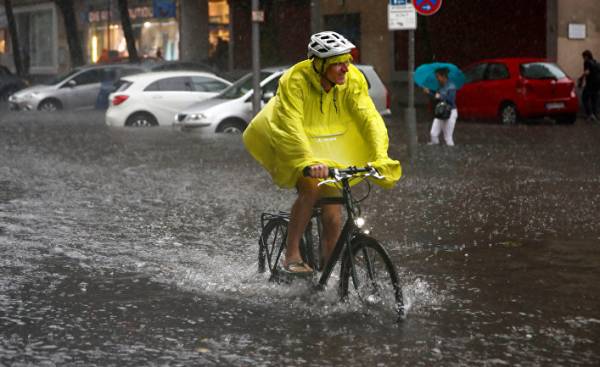 And it’s still raining, and there’s nothing we can do about it. We can wait. And when we really need to go outside for shopping or for some other cases, we can resort to tactical measures to get out now and dry in less than, if you go in an hour when the rain was likely to increase? Or nerves, to stay home and hope that the rain will stop or become weaker? And where the hell is the umbrella?

The weather is clear — please let Christmas be a temperature slightly below zero and with beautiful fluffy snow. The sweet smell of spring and a warm, long days and summer, please let it be warm, dry (with rain often at night), the weather is conducive for swimming.

Nature all this with interest, listening to, ironic grins and says: yeah, maybe, but I have stashed something else. Urban dwellers, take this! And we gradually understand not only the APR does what he pleases, and every month. This scathing slap in the face of nature arrogant and cocky “scientific society.”

Rains in many regions of Germany have become faithful companions this summer, a kind of Dr. Watson. Rails underground in Cologne are suddenly turned into an underground channel. The East German meteorologists reported that in the last six weeks, dropped two times more rain than usual all summer. And then ask the question: was it only twice?

It is this blurring of class boundaries in flooded basements and softened the dams many years ago contributed to the re-election of the Federal Chancellor Gerhard Schroeder. Then there was a danger of collapse of the dam on the Oder in Brandenburg.

The owners of sun decks

Photos of Chancellor rubber boots moved and convinced people. Schroeder understood this and used, which led to re-election. Water has a political significance! A long grin was and the owners of tanning salons, and allergies.

Of course, we humans would not have been if it hadn’t tried to manipulate the weather. For the harvest vacation, to overcome our powerlessness to drought or incessant rains. Shoot the clouds to rain — which was used in Bavaria, where these shots were allowed by the government in 1731.

From a commercial point of view, an interesting aspect: “Dear Berliners, we promise you that the next U2 concert at the Olympic stadium will be dry, because we get the clouds. Dear brandenburgers, sorry, the first five callers receive a free umbrella.” Or what? No, in Germany such manipulation is prohibited.

In advanced (at least technically) there are even state “the authority to change the weather”, which produces a huge amount of chemicals in the sky, that in the event of a drought to convince cloud that they send your soil “moist and valuable cargo”.

And so “good” they have it mastered, because when such actions occur and entire storms, one in Beijing and the surrounding area, although he was overcome drought, but instead of refreshing rain, the region was drowned in the Blizzard.

Here, the indication of Durrenmatt suggests — if we have advanced so far, to really fully control the power of the heavens, and this knowledge would fall into the wrong hands, then the incessant rains would be the most innocent, which would be expected from North Korea. And here smart the Simpsons be an unpleasant Oracle of the year, and the evil industrialist Mr. burns suddenly closes sunlight.

Why we just can’t take it? Let’s just accept the fact that nature is stronger than we are and probably ever will. Is it not liberating recognition that the water pouring from above, nothing can be done? If it does not teach us humility? We’re still grinning, shrugging our shoulders.

If grey skies fallen into melancholy — why not celebrate this? On Spotify, surely, you will find and romantic rock ballads, heaven, probably, also have left the disc by Lionel Richie. And unlike the Gauls, we know that the sky on our heads will not fall. Even if we recently so thought more than once.

And not just recently. What we need to fill our tapes in social networks, if not laconic observations about the summer of 2017? There are users publish pictures, edited in photoshop, which shows the garden under water where the diver looks, everything was in order.

Concert Robbie Williams under the open sky, held in the capital, visitors say about the swim, someone notes that with such weather it is no wonder that the Berlin airport does not finish building. And the inhabitants of Northern Germany tweet: are you talking about floods and water masses, and we call it weather.

In 2017, when using Google Navigator in real-time to track even a small traffic jam before the traffic light, at any time of the day to order food and merchandise through the Internet is at such times that the nature shows us the scope and brings relaxation. The authors of the film “the Matrix” was wrong: not machine take the dominance and nature, which shows us who’s boss.

Comedian Otto Waalkes from rainy East Frisia 40 years ago was right when the serious voice of a news announcer announced: “it Will be warmer or colder, it depends on the weather.”

In this nothing has changed. This means, let’s enjoy the rain, enjoy the fact that there are still forces greater than we. With candles, tea and cake can be good to survive the summer.