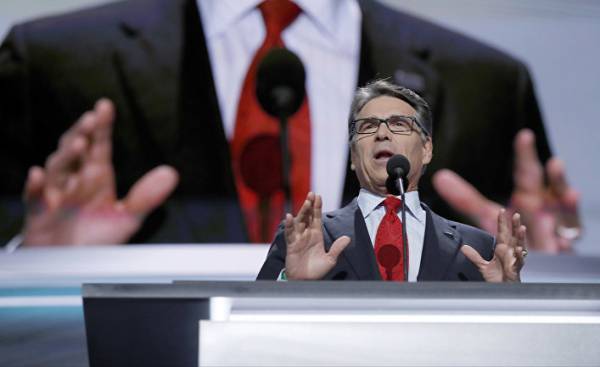 The Minister of energy of the USA Rick Perry (Rick Perry) was sure that he discusses cyberattacks, as well as a breakthrough in the field of biofuels with the Prime Minister of Ukraine Volodymyr Groisman. Alas, this 22-minute phone conversation, in fact, had the Russian media.

Vladimir Kuznetsov and Alexey Stolyarov, who are called “Jokers of Russia” (the Jerky Boys of Russia), have already conducted this kind of telephone conversations with U.S. Senator John McCain, as well as singer Elton John. The conversation with Perry, they organized last week, just a few weeks after his meeting with Ukrainian President Petro Poroshenko and other members of the Ukrainian delegation.

In conversation with Perry Russian media praised the new fuel made of alcohol and manure, and also discussed the decision of President Donald trump out of the Paris agreement on climate. With a record of this conversation can be found on the Internet.

They also asked the question of whether Ukraine will receive a discount in the purchase of American coal.

“Negotiations are always possible,” he said to his companions.

Ukraine and Russia are neighbors, but they clash over Russia’s annexation of the disputed region of Crimea. The Congress is ready to toughen sanctions against Russia because of its actions during the us presidential campaign 2016.

“We look forward to the arrival of some interested oil and gas companies in Ukraine,” said Perry during this conversation. The administration of the trump opposed to the proposed construction of the pipeline “Nord stream — 2”, which runs under the Baltic sea to the shores of Germany. The United States administration supports sanctions against Russia, added Perry.

Usually the phone conversations of members of the Cabinet with foreign officials are under strict control, and it is not yet clear how the Russian media managed to contact Perry.

The official representative of the U.S. Department of energy shaylene Hines (Shaylyn Hynes) has confirmed that the prank phone call took place.

“Minister Perry was the last in the target list of Russian media”, — said Hines in his electronic message. — These people are known for his drawings of high-ranking officials and celebrities, especially those that support the agenda, contrary to the policy of their government. In this case, we are talking about energy security of Ukraine”.

“Funny guys” — two American prankster, who in 1990-e years has sold millions of records about their conversations on the phone with their unsuspecting victims. Kuznetsov and Stoyanov use some elements of their practice, and post their recordings to the Internet.

Report the prank phone call first appeared at the website of the company E&E News.

In this article participated Katya Dmitrieva.