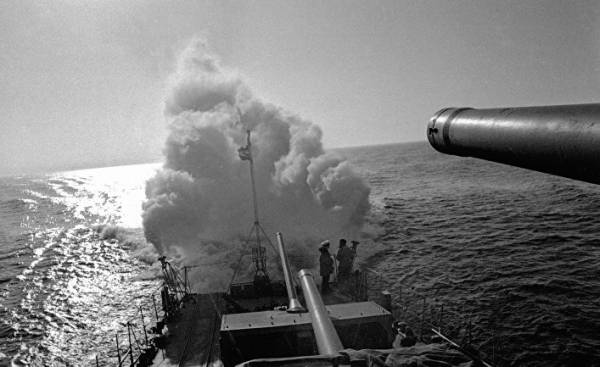 Most of the Soviet Navy during the Second world war is remembered for his important role in defending the doomed sea ports in Odessa and Sevastopol on the Crimean shore of the sea (as in the text — approx.ed.). However, the Arctic North of the Soviet combat ships have greatly influenced the course of the first few months of the war with Nazi Germany. A motley flotilla of destroyers and sentinel ships for a couple with two brave infantry divisions stopped the movement of Hitler’s elite mountain fighters, protecting the important supply line linking Soviet Union with Britain and the United States.

In November 1939 Soviet Union invaded Finland during the Winter War. After the terrible losses incurred at the beginning of three months of war, Stalin managed nevertheless to force the Finns to cede some territory. In a bitter twist of fate, this is what led to the Union between Germany and Finland that the Winter War was supposed to prevent. When on 22 June 1941, Hitler launched operation “Barbarossa”, the devastating German invasion of the Soviet Union, German troops in Northern Norway have gone through Finnish territory to capture the vital Nickel mines in Petsamo.

The next target was the port in Murmansk, an important Soviet naval base, through which British convoys it was most easier to deliver assistance to the beleaguered Soviet Union. The Royal Navy almost immediately sent in the Arctic region, submarines, destroyers and aircraft carriers. However, the Nazis did not think that the Soviet Union will last sufficient time to ensure that this aid played a role, and therefore provided for the seizure of the port of quite modest strength.

At the head of the offensive was mountain corps “Norway” General Eduard Dietl, consisting of two Premier divisions of Austrian infantry and mountain division “Edelweiss”. In both consisted of veterans of the Polish and Norwegian campaigns, recruited from the Tyrolese 2nd division was still connected with the aristocracy of the Habsburgs, and the third consisted of convinced Nazis. The command believed the two lightly armed units ideal for operations in the rocky Arctic tundra. Support mountain troops had a 40 th and 211 th attack battalion. To the latter was added 89 captured French medium tank Somua S-35 light tanks Hotchkiss H-38. Here you can see a map of the German offensive.

After a week spent on the transition from the Norwegian Kirkenes to the collection point on the Finnish border, July 29 the German mountain troops launched an offensive under the code name “Platypus” (“platinum Fox”), knocking the machine-gun battalions of the 23rd fortified area. Following the French tanks, the Third mountain division was able to seize the bridge crossing the river Titovka, while just North of the Second division cut the neck of the Peninsula Rybachiy, failing, however, to break through the defense of the Peninsula.

German strategists overestimated the Soviet road system, and both the German divisions was faced with the need to manually carry their supplies through the strewn boulders of the landscape. German engineers spent tons of explosives, trying razravnyat lifeless, similar to a lunar landscape that it could drive vehicles.

The Germans soon encountered stubborn resistance along the river Litza, held the 14th and 42nd infantry divisions, both of which have passed the Winter War. Despite this, the sixth of July three battalions of the Third mountain division was able to make the crossing, although soon in the framework of counter-attacks hit the Soviet troops, and I-16 fighters.

Dietl was preparing to reinforce the bridgehead, when I found out that tacky Soviet patrol fleet and transport ships under the command of captain 1st rank Platonov dropped the two assault battalions in the Bay of the Person in the rear of German troops. At that time, among the surface ships of the Northern fleet were only eight destroyers, seven patrol ships and a pair of minesweepers and torpedo.

Concerned about the safety of their stretched supply lines, Dietl postponed the offensive for a week and asked for reinforcements. He has got a squad of older Finnish soldiers and machine-gun battalion, which he sent to hold the line along the Peninsula Rybachiy, and the Second division “Edelweiss” July 13, moved in the direction of the river Face.. a Day earlier, the five German destroyers went to sea to support operations and to prevent the landing of new Soviet troops, and destroyed a small Soviet patrol ship before you return to Norway.

This however did not deter unfaltering captain Platonov from his mischief. On the day of the German offensive he mockingly dropped a 352 nd infantry squad 14 division in the West, held by the Germans side of the river Face. His patrol boat “Tornado”, later gained fame under the title the comic “battleship Litsa”, famously walked along the Germans occupied the coast and exchanged volleys with the Austrian artillery batteries.

The occurrence of Dietl failed miserably, because all of the units that was responsible for providing advanced, were forced to deal with annoying Soviet troops. Air strikes on Petsamo and Kirkenes caused British aircraft carriers “Furious” and “Victorious” — only added to the mess. Failing to do so, Dietl repeatedly canceled the attack. A German bridgehead on the Face shrunk to a smaller perimeter, in the hills and mountains, which had no particular strategic value, was conducted bloody battles to dislodge the Soviet troops penetrated there.

In early August, an impromptu drum group from the Finnish and German troops managed to beat out 352 th regiment from the West Bank. Finnish forces fiercely shelled the fleet Platonov’s rifles, while he was carrying survivors from 352 to secure the opposite shore.

The morale of the German mountain troops had reached the bottom. In Austria it has been rumored that the mountain infantry was doomed to die in a rocky Arctic craters. Dietl begged Hitler to allocate another mountain division to ensure capture of Murmansk. His wish was granted when his aid was sent to the Sixth infantry division and the Ninth regiment of the SS. However, the British cruisers Aurora and Nigeria almost destroyed one of the transport ships of the Sixth division, which was saved only by the sacrifice of accompanying patrol ship “Bremse”, which was rammed and broken in two by the courts. Soon from Murmansk to the aid of the Soviet Navy left the submarine of the Royal Navy and the Royal squadrons of fighters “Hurricane”. A week later the command of the German Navy declared the transport operations marine supply so far to the East too dangerous.

This delayed the arrival of the Sixth infantry division until Oct. Dietl decided to start their last offensive on 8 September, with the support of only one SS regiment and a detachment of the aging reservists. However, the fanatical forces of the SS was not enough to compensate for their lack of training and experience, and their battalions fled in the face of the Soviet counteroffensive. German mountain troops managed to capture some rocky height, devoid of any cover, however, retreated before the onset of the Polar division of the militia.

In the end, 19 Sep Dietl was ordered to retreat to defensive positions along the Litsa river, summing line under the attempts of the Germans to seize Murmansk. Held simultaneously with this operation “polar Fox” almost cut railway route linking Murmansk with the rest of the territory of the Soviet Union, but was suspended in November, when the Finns reduced their participation in the result of diplomatic pressure from the allies.

While the Second and Third mountain division withdrew from the front, the Soviet 52nd division was upgraded to elite guards for their actions during this campaign. Over the next four years the allies of the Soviet Union brought an incredible amount of supplies and military equipment through risky Arctic convoys to Murmansk, bringing a total of more than 4200 tanks, 7,400 aircraft, 4900 anti-tank rifles and millions of rounds of ammunition and gallon of gasoline.

While numerically superior enemy, the Soviet forces had suffered one crushing defeat after another in the early months of operation Barbarossa, two Soviet infantry divisions in the Arctic managed to stop the German offensive, almost similar numbers. It was not only due to their discipline and competent commanders, but also thanks to the decisive action of the Royal Navy and gives the enemy a number of Soviet Northern fleet. Without a single linear or amphibious assault ship last used his advantage in mobility in coastal waters, harming your opponent, trying to ensure the supply of supply through difficult terrain. A small fleet of patrol ships and destroyers Platonov has made excessive contributions to Soviet resistance to the German invasion.

Sebastian Roblin (Sébastien Roblin) has a master’s degree from Georgetown University in the field of conflict resolution. He was a teacher in the peace Corps in China and also worked in the field of education, refugee resettlement, and was engaged in editorial activities in France and the United States. Currently he writes on security and military history for “War Is Boring”.