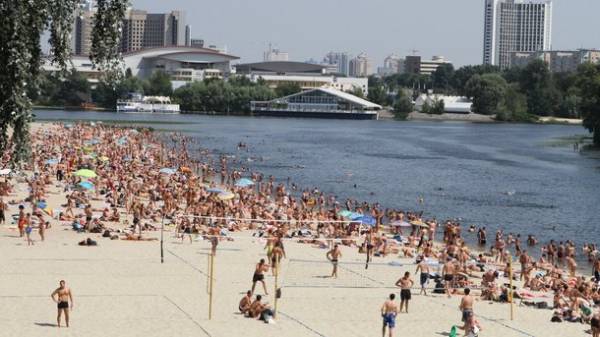 In Ukraine next week the temperature will rise to the level of 35 degrees Celsius. While the storm cyclone will cover the territory of the West, and early next week will spread to the Central and Eastern part of the country. A small cold snap is expected this Sunday – in the afternoon the air will warm up to 26 degrees Celsius. Read more about what kind of weather to wait for the Ukrainians this week, found the website Today.

Saturday, July 22, in Ukraine is expected to warm and rainy weather. So, precipitation from thunderstorms will be in the West, the North, and also in the Cherkasy, Poltava and Kharkiv regions. The rest of the – partly cloudy. In the East, North, Central and the West, the day temperature will rise to 29 to 31 degrees above zero. At the same time, in Kherson and Mykolayiv oblasts is expected warming up to 35 degrees. 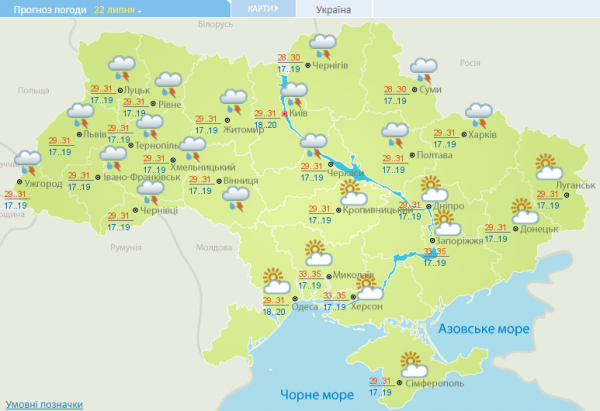 On Sunday weather forecasters predict a slight cold. So, in Western regions the temperature will vary between 26-28 degrees of heat, will be thunderstorms. As precipitation this afternoon is expected to Kirovohrad, Cherkasy, Poltava, Lugansk and Donetsk regions. Relatively hot weather in the South to 35 degrees in the afternoon. In the center and North, from 26 to 28 degrees. At the same time in the capital in the afternoon the thermometer column will rise to 24-26 degrees. 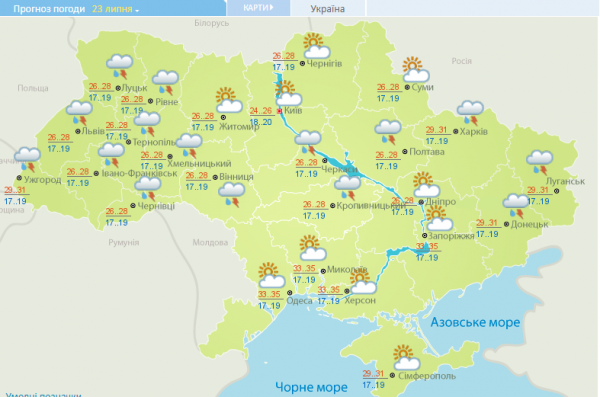 24 Jul storm cyclone will cover the territory of Central and Eastern Ukraine. Also the rain and thunderstorms will take place in Odessa region and in the West of Ukraine. Hot weather expected in the South to 35 degrees Celsius in the centre and in the North to 29 to 31 degrees. In the capital the air warms up 27-29 degrees, and in the North – 25-27 degrees. 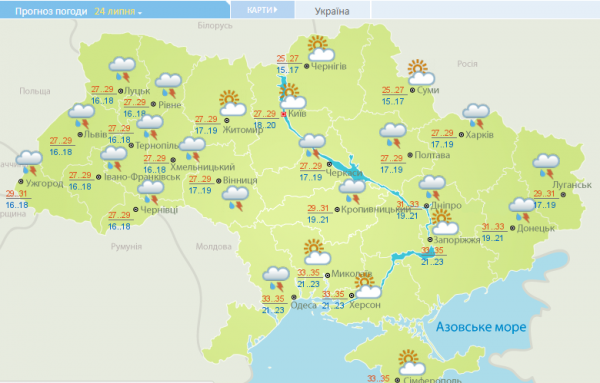 The same weather is expected on Tuesday, July 25. 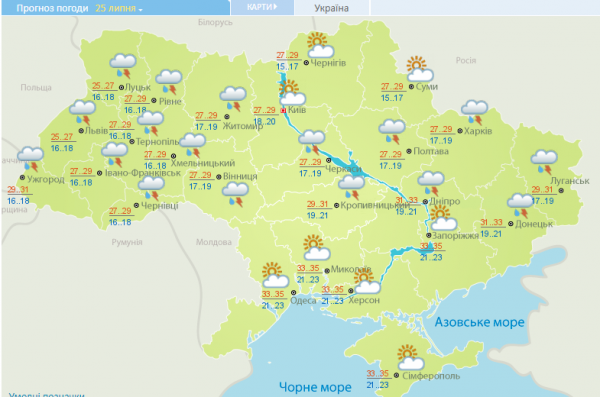 22 Jul revered the memory of the martyrs Pancras and Cyril, informs a portal “Weatherman”. In this day taste the first cucumbers from the garden. In people, this day is called blueberry because on July 22, started picking blueberries. According to popular belief, “blueberry leads from the stomach famously,” she “heals stomach ulcers, cleans the blood, regenerates the liver”. Our ancestors noticed if the day is hot, in December, we should expect a strong cold.

On 23 July, the day of St. Anthony of the caves. In the old days noticed if this happens the deaf thunder – to the quiet rain, and if the thunder booming, you can expect rain. From earlier times until we reached a valuable note to fishermen: if the thunder’s fast day (Wednesday and Friday) – fishermen will have a good catch of fish.

July 24, the commemoration day of St. Olga. Also on this day, is revered the memory of the great Martyr Euphemia the all-laudable. In people, this day is called Efimiy-starnica because it is very hot weather. Often the day can be stormy. At this time begin to fall the dew. Since ancient times the end of July – the dewy time. These dew are harmful to tomatoes. Our ancestors noticed if the day is Sunny, the harvest of grain crops will be good.

July 25 the people call. Great Dew. Proklova dew is considered curative. In the old days they were collected for the treatment of eye diseases. In the old days believed that the dew on this day gives beauty, peace of mind. Our ancestors noticed if Proclus night, no dew, but in the lowlands there is no fog to the bad weather. And if the night dew does not dry out – to be the storm. At this time, bloom gladioli.