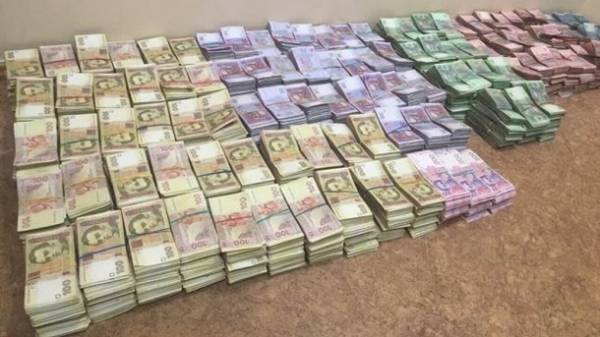 Liens in the tens and even hundreds of millions of hryvnia in Ukraine is not new. Now every high-profile case that comes before election as court of a preventive measure for the detainee, ends with the appointment of fabulous sums of money. “Today,” I remembered the largest deposits in Ukraine and found out whether earns this money to the state.

THE LETTER OF THE LAW. In fact, the Criminal procedure code of Ukraine, the pledge is an obligation of the suspect. That is, the court defines a measure (e.g. two months in custody) and the amount of the Deposit. Making him a suspect out of custody, but is committed before a court (for example, not to leave the country). By law, there are three boundaries for the amount of bail: the crimes of average weight is 72 thousand UAH, heavy — 288 thousand UAH, and for very heavy — 1 million 80 thousand UAH. But, based on the law, the judge can raise the bar by assigning any amount, if he sees fit. “Get the ultimate “ceiling” in the articles of the criminal procedure code is not installed. It in each case determines the judge, — has explained to us, a lawyer-criminologist Anna Painter. — Theoretically it can be any amount, even a billion”. 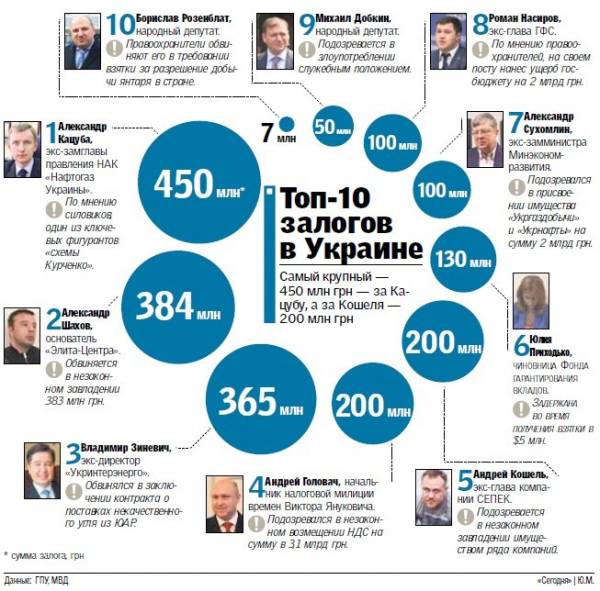 RECORDS. To date, an absolute record for the amount of the Deposit remains the ex-Deputy head of “Naftogaz” Alexander Katsuba — UAH 450 mln. He was detained in June last year on suspicion of involvement in the machinations around the liquefied gas in the amount of UAH 2.2 bn. But having signed a deal with the investigation, Katsuba came out, paying “only” 100 million UAH. The second superslow appointed organizer of construction Scam “Elita-Center” Alexander Shakhov. In April 2016 he was released from prison, defining the Deposit is 384 million UAH. However, Shahi said that the money had not, and custody to return it and could not — by the “law Savchenko”, he spent maximum period in the incriminated article. Later he escaped from house arrest. The largest Deposit, which was paid this year, UAH 100 million. It has made cash the wife of the former head of the SFS of the Roman Nasirov Katerina Glimbovsky. This amount weighs slightly less than 230 kg, and if the bills put one on another, the tower will be three stories high house.

Many have requested the court for the freedom of the people’s Deputy Mikhail Dobkin, who is suspected of abuse of office. Prosecutors demanded 150 million, however, the court appointed 50 million. To date, the Deposit already made. Finally, a large Deposit of 7 million UAH has identified parliamentarian Borislav Rosenblatt. However, he says he’s not ready to make the same amount, and does not know whether there are people who will help him.

According to the lawyer of Ivan Liberman, the CPC do is blur the issue size of the collateral. He explains that the judge determining this guarantee comes from the income of the suspect and account for its assets: “the Judge evaluates the real possibility of the detainee, for example, to escape from justice. And the amount is determined so that the latter had something to lose, so at least something was keeping him in the country.” Lieberman says that the person involved contributes funds for the account of the court specified in the ruling. This transfer must be held within five days. “In fact, we don’t see — they come at the expense of the court, and then to the reserve Fund of the state Budget. So in court, of course not, — explains the expert. But for the money the state could earn. For example, to make them in a blitz-deposits to third party accounts”. In turn, the lawyer Victor Chevguz says that ultimately all deposits into accounts of the State Treasury service. “Of course, they don’t lie there in a kind of safe. Like any other money in the state Treasury, they go into circulation, the government is working with them. Anonymous is like the cement in the mixer, always in circulation. Exactly where to invest these funds, determines the national Bank and other relevant authorities. However, there are two points: anytime money back to the owner, and the second is not so large amounts to the state time for them to seriously earn. But the money is still in the work” — sums up Chevguz.