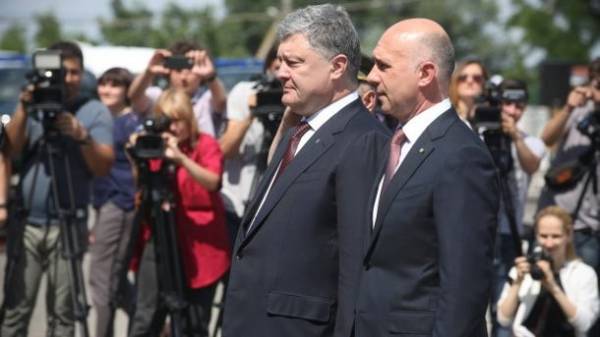 President Petro Poroshenko said that Ukraine is ready to support the restoration of the territorial integrity and sovereignty of Moldova. He said this at a joint with the Prime Minister of this country pavalam Philip the opening of a new checkpoint, customs and border control on the Transdniestrian segment of Ukrainian-Moldavian border.

He noted the support of the Moldovan government on the issue of Ukraine’s territorial integrity.

“I am grateful to the government, the Prime Minister and Parliament of the Republic of Moldova for its strong support for the sovereignty, territorial integrity and independence of Ukraine. I emphasize that we, Ukraine, are ready to promote the restoration of the territorial integrity and sovereignty of the Republic of Moldova, to restore that which was induced 25 years ago and today has such complex implications for thousands of people living in Transnistria,” – said Poroshenko.

The internationally unrecognized Transnistria separated from Moldova in 1992 after an armed conflict.

As reported, today, Petro Poroshenko and Paul Philip participated in the opening of the checkpoint customs and border control on the Transdniestrian segment of Ukrainian-Moldavian border “Kuchurgan-Pervomaysk”.