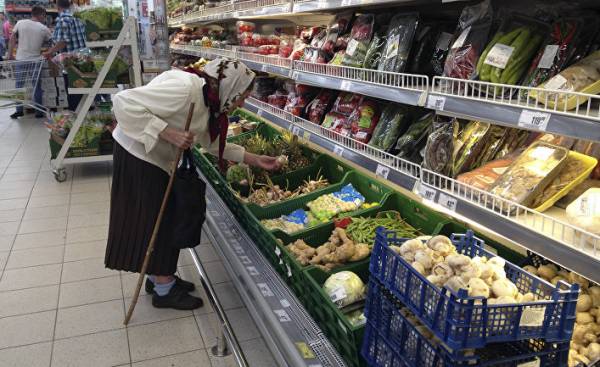 Every third Russian would like to receive social assistance in the form of free food. A quarter of the country’s residents say they really need it.

The results of the surveys presented the all-Russia centre of studying of public opinion. Other studies in which a comparison was made of the situation in Russia and Ukraine (between leading an undeclared war), show that poverty in these countries is afraid of almost identical number of respondents: 39% of Russians and 37% of Ukrainians. Despite the statements of Russian politicians, given that the situation in the country stabiliziruemost (and in Ukraine, says Kremlin, worsening) in recent years, the number of people experiencing such fears in Russia is increasing, and Ukraine is reduced. “This is not surprising, because real income is declining for the third consecutive year,” explains one of the Moscow economic experts.

While Russian propaganda portrays Kiev a symbol of poverty, on the Dnieper for the last year, real disposable income of the population grew by 7.3% and in Russia decreased by 6.5%. For the first time in many years Ukrainian GDP began to grow (2% in 2016), while the Russian, according to the Central Bank of Russia, fell by 0.4%. Unlike the Ukrainians, the Russians are increasingly afraid of rising prices (63%) and unemployment (45%). The people of Ukraine share these concerns (51% and 36% respectively), however, there are a number of such people over the last two years has declined, while that grown in Russia.

Meanwhile, the Russian policy hold the line official optimism. Prime Minister Dmitry Medvedev said Monday at a forum of investors in Sochi: “the Situation in the labor market is stable. We unemployment can do this.” The unemployment rate held at a record low, and this fact, as noted by one journalist, was “a source of pride for officials at various levels”. Meanwhile, the owners of Russian recruitment agencies warn that “in the coming years we can expect a sharp jump in unemployment because of the falling demand for unskilled labor”. Experts on social issues, in turn, indicate that among the four million people who cannot find work, becoming more “chronic unemployed”, i.e. those who do not work more than a year.

Financial experts report that over the past six months for 10% increase in the number of people who can declare themselves bankrupt (Russian law allows it citizens, whose debt exceeds 500 thousand rubles, and payments on it have been overdue for more than three months).

In this situation, more than one third of Russians supported the idea of introduction of “e-food certificates”. Instead of “cards on the meat,” citizens with lower incomes will be able to get something like a payment card: social services each month will translate into money that you can buy food (only perishable products domestic production). “Long-term storage products we include here do not want people to not spent it all on vodka,” explained one of the Moscow officials.

However, nobody knows how many people you need such assistance, and how much it will cost this program. The Ministry of industry and trade assumes that approximately 15-16 million. While in the country of about 22 million Russians live below the poverty line, and 5 million people receive the minimum patch.

“No card should not be entered. Food manufacturers begin to clash, will try to sell spoiled food or to force people to purchase only from them,” — warns the Chairman of the Petersburg Committee on social policy Alexander Rzhanenkov, based on our own experience. In St. Petersburg for 4 600 000 inhabitants 3 500 000 people who use different sorts of social assistance.