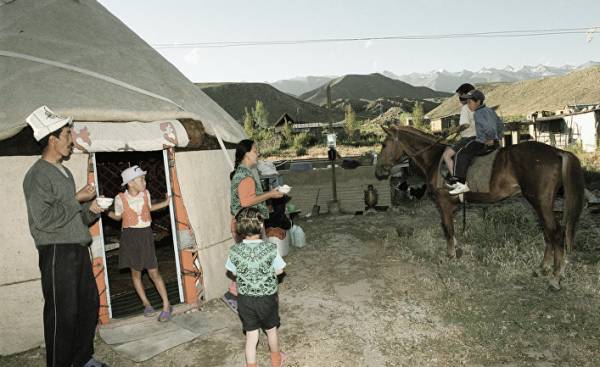 Last week in Kyrgyzstan entered into force court decision on recognition as extremist and ban the activities of religious movements “Yakin Inkar”. The decision was taken in mid-June. The verdict of the representatives of Themis made at the request of the General Prosecutor’s office. Meanwhile, the activists of this course believe that the injunction for them not playing any role because they do not recognize the secular laws. Parallel to this, in the Kyrgyz segment of social networking is actively promoted by the draft Constitution of the so-called Islamic state (is banned in many countries, the organization, including in Russia — approx. ed.) in the Kyrgyz language. The worst thing is that these ideas find their followers, who are ready to grab the throat of everyone who will vote against.

A religious movement “Yakin Inkar” began to gain popularity in the last 3-4 years. To distinguish them from ordinary believers is simple — men with long hair and beards and wear Pakistani type — long dresses and harem pants, women in black robes, rolled up handkerchiefs to the eyes. In recent years, the number of such “true believers” has increased significantly, they can often be found in the streets and bazaars especially near mosques on a Friday are the days when local Muslims gather for collective prayer.

Famous “yakymova” that advocate separate schools for boys and girls. For this reason, many of them forbid their children to attend educational institutions. They are against the use of phones, TVs, conventional medicine, etc.

In Arabic the name “Jakin Inkar” means “the denial of everything except God”. The expert from the southern capital of Kyrgyzstan Azamat uulu Asatulla believes that “they instruct the citizens in the wrong way. “Incarca” say that we should live like in the days of the prophet and lead people astray,” says the expert.

“Fergana” has already told that the movement “lacinova” came from the other, not less active religious movement “Tablighi, Jaamat”. “Cableguy” is banned in almost all CIS countries, only in Kyrgyzstan, they operate legally, with the light hand of the President.

The adherents of the “Yakan Inkar” to recruit an increasing number of people, for the soil, that is to say, the brains of their followers, whom they recruited from the ranks of the “tablegames”, is very fertile. The latter is known, the clutch (SAMK) sends hundreds of “people” for missionary activities.

Will the wife — will position?

It would seem, then suddenly the country began such an unprecedented surge of religiosity? The explanation is simple. The state does not have its own ideology, which would take the minds of the population. A Holy place is never empty: the minds of the people captured religious figures.

For example, the sermon well-known theologian, Chubak Jalilov are very popular in the Muslim world. The number of subscribers to its channels in social networks has up to 300 thousand people. The former mufti Chubak aji (the title of the Hajj to Mecca) is known for the fact that theological education in Saudi Arabia and is a strong supporter of the Salafi (Wahhabi) ideas.

A couple of months ago, Chubak zhalilov and his colleague Sobek aji Cotonou initiated the idea of the official introduction of polygamy. Supposedly, this practice will eliminate the problem of prostitution in the country.

— Kyrgyzstan single women 58 thousand more than men — argues Jalilov is not clear from the figures taken. — They have the choice to marry a Chinese, to remain without a husband or to get a second wife. This means that 58 thousand men should take a second wife. Of course, our basic law is not allowed. But this law is not working. Such the laws do not work there. There are laws against bigamy and stipulating liability for it. But look here at Arstanbek of Myktybek (known in Kyrgyzstan presenter — approx. ed.) is the second wife, Osubka aji (popular in Kyrgyzstan, the priest — approx. ed.) — the second wife, the fugitive Bakiyev (the former President of Kyrgyzstan approx. ed.) — two wives, the deceased writer Aitmatov had two spouses, Tursunbai Bakir uulu (former Ombudsman and former member of Parliament — approx. ed.) – wives do not count.

According to Chubak aji to take a second wife, a person must be a “real man”.

— And then the first wife will drive: “at-at” and the guy runs under the skirt and out of said talaq (divorce) second wife… If a man is able to support two wives tolerate their words and deeds, if it is not equal to women, and will behave with dignity, let him take a second wife. If not, then him and one will be a lot and let behind his wife and cleans her shoes…

To higher political office, on the proposal of the Islamic authority, to appoint on the basis of the number of wives.

— I believe that MPs should only be the one who has two wives. If he can be fair to them and forces them both to contain, then he would have found someone else to feed. We are now in the deputies go for easy food… except If you are able to contain himself two wives, then you are able to solve the case of the people… the Ministers have to be the three wives, if not — then not suitable for the position. The President has four wives. And if all wives be treated equally, then be able people manage. We have already seen, as instead of man control us wife. So you need to choose someone who can control their wives. Or to say unto him, go, mind your own business.

Some users in social networks has asked the initiators of the idea of polygamy to lead by example and to marry “prostitutes”… Answers, not difficult to guess, was not followed.

With the theme of polygamy in tune with another sermon of the Islamic scholar. Live the woman asked him a question: say a man wants to marry a second time. Do you need my consent if I mind?

The Chubak aji said that the first wife may not agree and be against it, but in fact her opinion doesn’t matter.

— Your disagreement is understandable. Only a pig will not become jealous. But you should not oppose the will of Allah. Can you tell that jealous, but follow the will of God. To ensure that your husband has taken a second wife does not require either your consent or permission. If the consent of a wife would be mandatory, then none of us men would not be able to have another wife. And then the unmarried women, our sisters, can not become a second, third or fourth wives… Even if you do not agree, your husband can take a second and third wife and thereby continue their charitable deeds. And may Allah help your husband to take another wife to treat you both fairly and could raise your children. May the Almighty guide you on the right path so you can correctly make the decision about wife new wife.

Agree that such statements from the mouths of authoritative theologian like the ignorant majority, to increase which contributes to low literacy.

Looks like President Atambayev, who a year ago called for the dissemination of ideas “Tablighi, Jaamat” figured it out. During the ceremony of state awards on 12 July, Atambayev called on people to learn from, and recalled the words of the prophet Muhammad that hour science replaces night prayer. “Not rasshirit foreheads in prayer, enjoy a better education,” Atambayev said and added that it will “not be confused” Islamic religion and Arab culture.

But I think the appeals of the heads of Kyrgyzstan significantly late. In the Kyrgyz segment of social networks are actively spreading the clips, which contained articles of the draft of the “Islamic state”. One of the points of this project States that the main language in Muslim countries should be Arabic, “because it is written in Holy book Quran”.

These words resonate in an amazing way with words the same Chubak aji Jalilov, who asked why the prayers need to read in Arabic saying: that the reading of Quran in Arabic you will receive a reward from God to 10 times the size than reading on the Kyrgyz.

In another article it is said that the foundations of state-building should be consistent with Islamic principles. And to lead government or to hold any position of leadership in the country can only “man who must be free (i.e. not a slave), adult, sane, just and capable of performing the duties assigned to it. Just be sure that it was a Muslim”.

I will not quote and cite any mention of these rollers in order to avoid another attack, now in inciting sectarian hatred (remember that the intelligence agencies opened a criminal case against me, the details of which you can read here).

You know about these campaign commercials special services? Because these clips are not made “on the knee”, and on professional equipment and a very high quality. Such propaganda industry worth a lot of money and for sure someone paid. Who?

For today in Kyrgyzstan 19 religious organizations whose activities are deemed extremist and terrorist. If the Supreme court approves the decision of a lower court to ban the activities of “Jakyn Inkar”, then this current will be the twentieth on the list of banned organizations. But still, this is unlikely to help keep the country from a gradual slide in the deep religious fanaticism.