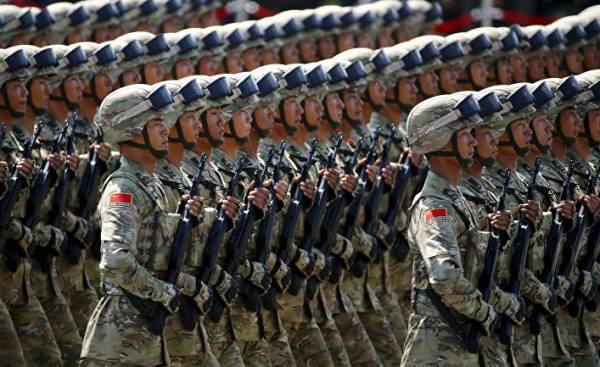 The formation of a military base in Djibouti became the first step of this kind for China: it occupies a strategic position adjacent to the other powers (USA, France, Japan…).

— Atlantico: What it says about the plans of China in the world?

— Jean-Vincent Brisset: Like many other initiatives since the end of the Mao era, the formation of a military base abroad is a reflection of the output of China out of isolation. This process has accelerated in recent years, in particular, after the Olympics 2008 and world Expo in 2010. China has long been the only permanent member of the UN security Council without a permanent military facility in a foreign state where there is armed conflict.

The new database not only is important in technical and operational terms, but also reflects China’s commitment to submit yourself to one of the greatest powers. It become even more important after Japan outran him and first settled in Djibouti.

— What is the interest of Djibouti for the great powers? Why is Djibouti, and not Aden, a strategic point of the British Empire?

— Geographical location of Djibouti is already of great interest to a great power with global plans. The country is at the entrance to the Red sea, through which is about 40% of all shipping. This interest increases even more in the background of the alarming rise of piracy in the region, which is causing concern all major States and forcing them to adopt an unprecedented common action. Incidentally, these operations have shed light on a number of issues of the Chinese Navy, in particular — with a long presence in the sea. The closest reference point to the Chinese in that time was the Pakistani port of Gwadar, which is located too far from the scene of operations. As a result, China, and Japan, began to look for other options. For a long time played a key role in the region, Aden could no longer provide the necessary geopolitical guarantees, but there are available facilities are not adapted to solve the task. Oman also had nothing to offer. Djibouti long ago “used to” the presence of foreign troops and has a good port and airport infrastructure. In addition, the local government gladly was willing to provide the facilities in exchange for rent, which is a large part of the revenues of the Republic.

In addition, Djibouti is for Beijing’s interest in the plan, which is part of the “Pearl necklace” — “Maritime silk road”, which stretches from the Chinese coast to Athens. At the moment it follows the logic of strengthening using a series of reference points without the desire to conquer remote territory. These strongholds can become centers of power, which manifests itself through the expansion of the colonized territory.

— Does this object, that China comes to the West militarily and intends to assert its influence outside the “natural area”?

— Qualitative progress of Chinese weapons looks impressive. First and foremost it manifests itself in military technology (especially naval), but it is uneven, affecting overall reliability. In addition, the lack of operating culture and the continuing “ballast” still talking about the need for major reforms to make the Chinese army competitive (or threatening). China recently announced that its staff will be reduced from the current 2.3 million (a few years ago it was 4 million) to 1 million people, which is saying a lot.

For many years it was not clear whether China become a world power or are willing to settle for the status of regional superpower, which it already was in a certain era. The status of a world power has many advantages, but at the same time imposes a lot of obligations, in particular in the implementation of the established outside of the General rules that Beijing hates. 1949 was a clear distinction between direct and active actions of China in the region (conflict in Korea, India, Vietnam) and far less visible steps in the more remote areas. For a long time through anti-Western movements were primarily rhetorical and restricted the supply of weapons to rebel groups and other forces. Participation in UN operations also did not go beyond sending observers who were not directly involved in the hostilities.

Today, we see the desire to Express yourself in military terms, outside the circle of the former vassals and territories, which China, as he claims, was denied the “unfair treaties”. At the moment it is limited to the protection of Chinese interests. Forming the base in Djibouti was largely just that, and not a desire to show his power to the West. At the same time perfectly visible build-up of forces in the immediate environment, as regards, in particular, the South China sea and located at the Indian border areas.