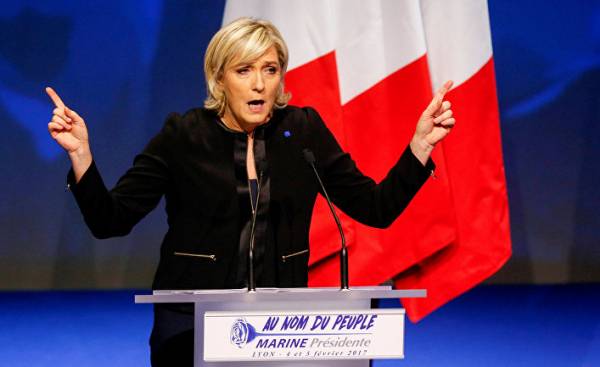 L’orient-Le Jour: the first time You held a meeting with the acting head of state during a trip abroad. Why is this possible in Lebanon and not somewhere else?

Marine Le Pen: First of all, I think that today my party — the first in France. We have established long-standing friendly relations with Lebanon, and on the occasion of the election of the President Aoun seemed to me necessary to make this trip for a meeting with the head of the Lebanese state.

It seems to me that Lebanon and France have a special relationship. She weakened in recent years, but I intend to seriously strengthen its. First of all, around the Francophonie: it is our common heritage, economic and cultural line, which again needs to be opened.

Further, around the geopolitical vision, because France is no longer, but must once again become a great power and a factor of equilibrium, particularly between the US and Russia. Lebanon is also a factor of balance, both in its history, and the ability to give every religion a place in government. This was made possible thanks to the commitment of the Lebanese people Lebanon, which is above the religious identity. I think this model would apply in other countries. This is a Patriotic model, which is moving us for many years and is completely contrary to the communitarianism of the Anglo-Saxon type. His example is the United Kingdom, where Islamic courts have allowed the divorce.

In Lebanon human rights and the family and political system are determined by the communities. Such a model would you like to see in other countries?

When I speak about other countries, that does not mean France. Each country has its own history, and I do not strive at any cost to impose on the French model, because the concept of a secular society often does not meet with understanding in other States. Nevertheless, I believe that we share a commitment to patriotism, and that such a model in the region would preserve the integrity of religions and minorities, who today are subjected to merciless persecution.

— You don’t want this communitarists model for France, but I believe that it is for the benefit of Lebanon…

— Given the situation in the Lebanon crisis because of the emergence of refugees, whether you intend to maintain or expand adopted at the conference in London in February 2016, the obligation of France on the allocation of 100 million euros to the country in 2016-2018?

— Yes, of course I would leave in force this help. As for its increase, let’s see if this is necessary. I want to note that from the beginning of the migration crisis I was the only one (even now I’m joined now by the European Union), who said that to accept migrants in Europe — a big mistake. The international community would from the outset to create and Fund humanitarian camps in Syria and neighboring countries under the responsibility of the office of the UN high Commissioner for refugees. So it would be possible to place refugees close to home.

— When a crisis occurs, resolve it rightly occurs at the regional level. If suddenly tomorrow there is a serious problem, for example, a natural disaster in Germany, I don’t think the Germans would go to Lebanon! Anyway, I don’t think it’s normal that the Lebanese have to beg for assistance from the international community. In any case, the overall goal is to return the Syrians to their home country…

— A significant portion of them will not return, remains in power, Bashar al-Assad…

— Who will not return? If Islamist fundamentalists will remain and the rest will return to Syria in the coming years you will definitely have serious problems!

Anyway, Lebanon is not obliged to tolerate, it may with good reason to send the refugees to their home country at the end of the war.

During the trip you met with many political and religious figures, particularly with the Maronite Patriarch and the mufti. You treated all parties with the same message?

— Of course, I had no reason to meet with some but not with others. During the visit, I stressed the important role of France in the protection of Eastern Christians: it’s historic role, from which you cannot to refuse.

— Do you think that France abandoned her?

— Partly Yes. Nicolas Sarkozy said the Eastern Christians: “you will Need to leave your countries that have accepted refugees in Europe”. I think he just doesn’t understand their aspirations, did not understand Lebanon. At the same time, Jacques Chirac, with whom I have many disagreements, and françois Mitterrand maintained the historical ties between France and Lebanon. I struggle to the Christians remained in his native country.

— How can we reconcile the desire to protect the Eastern Christians and the support of the Syrian regime, which has brought a lot of troubles on the head of the Lebanese Christians and, in particular, staged assassinations of their leaders?

— The hardest part of the war — to stop her. Once France and Germany managed to achieve reconciliation, I think that Lebanon and Syria is also on the shoulder. It seems to me that to make peace possible in the fight against the common enemy. This enemy now is undoubtedly the “Islamic state” (banned in Russia as a terrorist organization — approx. ed.). This common enemy can help to gather at the same table Russia, Lebanon, USA, France… I said from the very beginning of the Syrian conflict (and then alone) that the overthrow of Bashar al-Assad can only help ISIS to take power in Syria.

— ISIS did not exist at the beginning of the Syrian conflict…

You’re right, it was born in Iraq thanks to the United States. As for Syria, I think that those who bet on not associated with Islamist fundamentalists moderate opposition, should have understood that if it exists, is very weak and can not be an alternative to Bashar al-Assad. Geopolitics often have to choose the lesser evil, and in my opinion, in this case the lesser evil — Bashar al-Assad. I’m French and I think that he was not a threat to France.

— If you are elected, you normalize the relations between France and the Syrian regime? Including through the resumption of the French Embassy in Syria and meeting with Bashar al-Assad?

— Yes, of course. Because I want to gather at the negotiating table. I think France made a huge mistake in breaking off relations with Syria. The fact that the rupture of relations with Syria resulted in the rupture of relations between the French and Syrian intelligence. It did not let us see the looming threat. But I’m not going to teach anyone life, wishing there’s a lot without me. For me the main thing — to protect the interests of France.

— Can this defense to provide military intervention on the example of the operation of Moscow in cooperation with the Damascus?

— Russia was forced to launch a military intervention just because certain countries have taken measures to weaken the Bashar al-Assad, the only one who was able to repel the Islamist fundamentalists. It’s a Domino effect.

In a similar situation, France would follow the example of Russia, if you were President?

— If I were a head of state at the beginning of the war in Syria, I would support Bashar al-Assad in the fight against the Islamists, but would not hold a intervention. Every time we intervene in other people’s conflicts, it became a disaster for us. It seems to me that France should intervene only if requested by the government.

— By your words, Bashar al-Assad is the best partner in the fight against ISIS, although he and his allies had prioritized the fight against the rebels and not ISIS? This is evidenced by the capture of this group of Palmyra during the offensive in Aleppo…

I can’t put myself in the place of Bashar al-Assad and to say why it was necessary to fight for Palmyra, and not Aleppo. I don’t have enough information to discuss it. But I do not doubt the desire of Assad to fight ISIS.

— You have never had the slightest doubt?

One of the presents in your program caused a lot of noise in Lebanon. You intend to cancel dual citizenship with non-European States. How to explain to tens of thousands of Franco-Lebanese, that they will have to choose one of the two countries?

— First of all, we have not yet decided whether such a measure is to have retroactive effect. We are thinking about it, but the decision is still pending. This means that the regulation will affect only those who intend to dual citizenship.

I want to seek clarification of conditions for obtaining French citizenship. There are a number of countries where dual citizenship with France is a simple task and with other all the more difficult…

— In the resolution no. Subsequently, however, can be concluded bilateral agreements with several countries. Obstacles for this. I’m not going to stubbornly put restrictions…

— Whether potential exception to be guided by some other criteria besides nationality?

Religious criteria will not, if you know about it… I Want to remind everyone that I basically believe that a person can only be one nationality, because we are talking about the nation.

— However, the Franco-Lebanese believe that two of their identity are closely connected with each other…

— During the visit you are trying to raise funds for presidential and parliamentary elections, the Lebanese sponsors and banks?

I have no Lebanese sponsors. And I didn’t come to look for them. But if the Lebanese banks will want to lend me some money for a presidential campaign they are interested in it, if you are committed to the development of Lebanon!