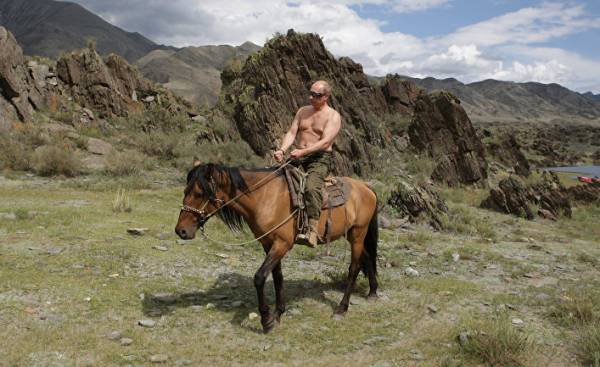 Half a century separates today’s Russia and Russia, where I studied. Half a century separated the latter from Russia, since the “October revolution”. As you can see, I lived in the middle of one of the most important centuries in the history of Russia and the world. Last Friday, while in London, I watched the annual press conference of President Putin, which lasted for four hours. On the screen you can see numbers and information on regions and citizens, the questions which the President answered directly. Questions to the head of state asked citizens from all over Russia, the largest country in the world. During the annual press conference, Putin gives a speech and makes no claims, he merely expresses his personal opinion, even if it concerns the “dangerous” questions as the issue of withdrawal of Washington from a nuclear agreement, as well as the crisis over Ukraine. As for Ukraine, which is Russia’s brotherly nation since the formation of Kievan Rus in 862, President Putin could hardly restrain himself from criticism of its leadership.

Press conference, Putin called “straight line”. The preparation for it took place over 13 days. At this time, from all over Russia received messages and phone calls, the number of which exceeded two million, and many of them had the nature of complaints, mainly related to environmental pollution and lack of housing.

Good news reports on Russia’s achieving first place in the world ranking grain crops, a sharp increase in life expectancy of Russians to 72 years, the construction of the world’s largest icebreaker for the development of spaces of the Arctic, which is considered the new center of the global competition for natural resources. During the live broadcast, Putin promised in the “online” some people who had complaints that received them. The emotional character was the part of the press conference, during which the President spoke with a man whose wife just had a baby. The issue of fertility is very important for Russia, which faces several demographic challenges. The conference concluded that Putin acknowledged for the first time that he became a grandfather and apologized for not want to talk about their grandchildren, daughters and their mother because it desires to live as ordinary citizens, away from the limelight.

I believed that Orthodoxy was the doctrine of the Russian state, however, answering the question of whether Isaac’s Cathedral in St. Petersburg returned to the Church or will it remain a Museum, President Putin confirmed that the Cathedral is a monument of architecture and is a UNESCO world cultural heritage site by UNESCO, and Russia is a secular state. We can summarize that Russia seeks to avoid the celebration of the centennial anniversary of the largest revolution in the history of the state, often heard words such as “security” and “stability”. This explains the use of Putin and Russian officials of such expressions as “our partners”, even when talking about a hostile Russian government. During the revolution people are asking for stability — this is often overlooked by those who incite the people to revolution in Russia. The same thing happened during the revolution against the Communist regime in the last century. Russia is currently experiencing the biggest upheaval in its history, it lost most of the territory of the Soviet Empire and rejected the ideology of communism, followed by millions. The history of Russia is nothing like the series of revolutions and counter-revolutions, some of which are more serious than others, but the collapse of the Soviet Union has surpassed them all.

If you take one of the most important books about the revolution in the history of Russia and the world, “State and revolution”, which Lenin published in the year of the October revolution, that is, in 1917, you might find that nothing in her, neither the language nor the content doesn’t appeal to us. Tenets of the bourgeois and opportunist parties today do not cause us any emotion. The only thing that stirred up my memory, so it’s a verse that I have read about half a century ago: “We don’t “dream” about how right to do without any control, without any subordination; these anarchist dreams, based on a misunderstanding of the tasks of the dictatorship of the proletariat, radically alien to Marxism and in fact serve only to postpone the socialist revolution until, as long as people are different. No, we want the socialist revolution with people like that, as it is now, without subordination, without supervision, without “overseers and accountants” will not do”.