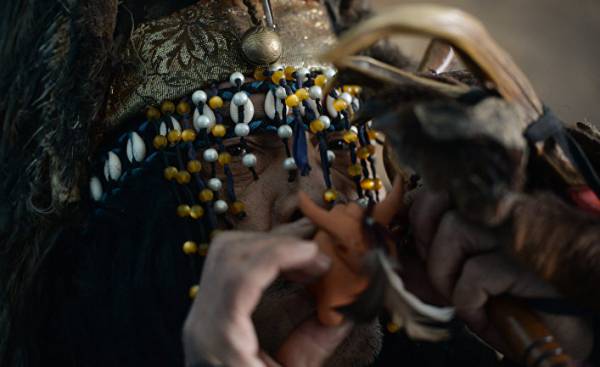 When I first came to our village, the driver stopped the car on top of a high hill. Needed to appease the spirits: tie ribbons to the branches of the trees and throw down the pancakes.

Woman, we are renting a house, asked to cross before you go into the yard. On the door jamb, hung the amulet on happiness: the whisk of horsehair, which was the skin of a rodent and a duck’s beak.

In Yakutia, the spirit world is still relevant. It is believed that everything animate and inanimate has a soul — Kut — or even a few souls.

The Siberian, and Finno-Ugric peoples, the world was divided into the upper world of the gods, the middle world of humans and the lower world of the dead. The shaman travels between the worlds and talking to spirits. The Yakuts relationship with top world set of white shamans, with the bottom — black.

In front of our house stands a small Orthodox prayer room, chapel. Orthodox churches are in many of the Yakut villages, but they rarely comes.

Formally, the Yakuts were converted to Orthodoxy in the nineteenth century, but in practice they have not abandoned the worship of nature. Shamans actively performed their duties until the 1930-ies, when the Soviet government brutally got rid of them.

The Yakuts avoid churches because next to them is usually a cemetery. From the bones of a dead man should stay away.

A villager was surprised to talk about our Christian faith.

“I don’t understand why you need to ask forgiveness for some sins. What is this faith? We need to be strong.”

The Yakuts are a progressive people, and they adapted their beliefs to modern life. A person occupying a high post, told me that he looked at his house with the person that can identify the presence of negative energy by using the swinging metal sticks.

“Because of the permafrost there are a lot of bad energy”.

These shamans in Yakutia, a little but different folk healers.

When I first came to Yakutia, I was taken to a completely new medical center. It was full of modern medical technology, but the doctor took me into a room that had one couch. Me do not disturb, but I lay on the couch at the man’s request.

“All diseases are from birth. You came out of the womb in the wrong position,” he said.

I needed to lie down quietly on the couch for 20 minutes until a man took me by the arms in the air and diagnosed.

Representatives of classic shamanism in Yakutia — Tungus peoples such as the Evenks. The word “shaman” comes from Tungus language. Two of the most famous shaman in the post-Soviet time was of Evenki village Iengra. Both have since died. Shaman savey died in 2013.

“I once found in the woods made of wood Loon. The Loon is our sacred bird. She created the world, raising the earth from the bottom of the sea, told me the woman comes from the village of Iengra. — I am a teacher and I decided to take it to school. Then I got my brother, and the child has developed psoriasis. Someone told me that the forest holds its ceremonies savey. I gave him back the bird, and all the problems resolved themselves”.

After Sheba shamans in Iengra left, but he had disciples in Yakutia. One of them is living in Yakutsk Anna Sofronieva.

I went to meet with her usual multi-storey building. I met a beautiful middle-aged woman, dressed in Western fashion.

She was dressed in shamanic garb. Leather headdress hung horse hair that covers his face. The woman was a shaman’s drum and stick. The cloak of the skins of elk hanging bells and claws.

Sofronieva started jumping and banging a tambourine in a growing pace. It wasn’t a real ceremony — Sofronieva only showed, as he passes.

“I’m flying at a height of one metre,” explained Sofroniew their jumps.

“I feel that you have a very pure soul,” she said.

Then had to pay and leave. The shaman came next client is a woman who is clearly something very concerned. She came over a thousand kilometers from the town of Mirny. It turned out the son of the woman fell from the electric pole and could not move hand or foot.