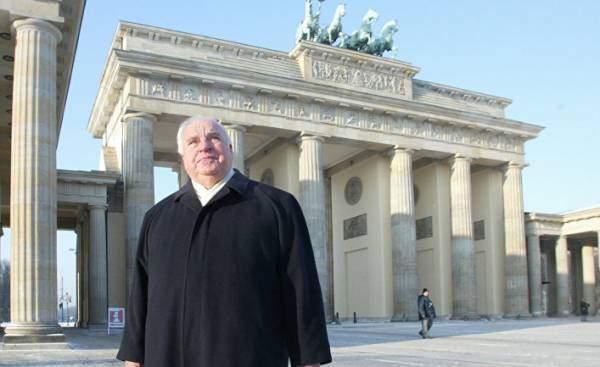 The fall of the Berlin wall in November 1989 was for all the world like thunder from a clear sky. Even those who, like Chancellor Kohl, followed closely the dramatic developments in the Soviet bloc in the second half of 80-ies, were not ready for such a geopolitical earthquake that changed the face of Europe. However, Since that is 15 years of age, was caught in the collapse of the Third Reich and the partition of Germany between the former allies, was able very quickly to recover from the shock, to realize the importance and uniqueness of the historical moment. After only a few days after the fall of the wall, Chancellor Kohl presented to the Bundestag, the West German plan, German unification and said in a speech before the residents of the East of Dresden, that he will respect the choice of the citizens of the GDR.

Helmut Kohl was aware of the deplorable state of East Germany. But even he did not imagine the extent of the economic collapse of the GDR. The economic collapse of the USSR also became obvious very soon. Kohl was able to use these circumstances coupled with economic strength of West Germany to realize the dream of millions of Germans, hoping, but not believing in the possibility of uniting his country. Kohl did this, freeing Germany, according to the Germans, from the “occupation armies”.

Kohl also knew that the only way to overcome the fear of Europeans before the unification of Germany is the strengthening of the European Union. So he responded to the suggestion of the then French President Francois Mitterrand to establish a common European currency (Euro). Mitterrand believed that it would serve the interests of Europe and prevent full control of the German economy over the neighboring countries. Kohl knew that the collapse of Soviet Union opens up the possibility of EU accession of Eastern European States and Germany in this process will occupy a Central place.

The founders of the European Union were two outstanding European politics — French President Charles De Gaulle and German Chancellor Konrad Adenauer. Two other leaders, Mitterrand and Kohl managed to give the EU a new life and move this Union forward.