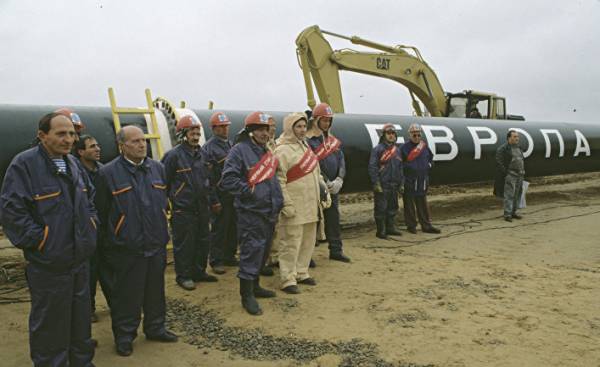 USA under the leadership of President of a conservative protest against plans for a gas pipeline connecting Russia and Western Europe. The white house believes that anyone can become a dangerous weapon in the Kremlin’s influence on the Old continent. Western European countries (castmaster) Express their disagreement and in spite of us sanctions, give the political and financial support. I talk about the controversy surrounding the “Nord stream — 2”?

The history of the construction of the “Yamal” is a story about the political opposition of three powerful blocks: USA, Western Europe and the Soviet Union. The gas pipeline project was ready in 1980, and first agreement the Federal Republic of Germany and the Soviet Union signed in 1981. Against this initiative sharply criticized U.S. President Ronald Reagan. He said that it breaches the agreed policy in NATO, and the new pipeline will become an instrument of Soviet influence in Europe. Reagan was interested in the economic weakening of Moscow, so the prospect of imprisonment by the Soviet Union of lucrative contracts to supply gas to Europe seemed to him unacceptable. The American President has taken diplomatic action against the European countries. One of the arguments in the negotiations was the gas from the Norwegian fields, however, the Western block under the leadership of Paris and Bonn refused him supplies, and subjected the proposal to criticism.

The Germans were interested in the creation of the pipeline, which would connect the country with the Siberian deposits of the USSR. West Germany was undergoing rapid economic development, so she needed a large amount of fuel with low emissions. It was known that “Yamal” can cover up to 35% of the energy needs of Germany.

The already tense situation was exacerbated martial law in Poland. Reacting to the events of December 1981, Ronald Reagan decided to impose sanctions, banning the export of equipment which was necessary for the Soviet pipeline. This, however, did not stop the talks between Moscow and Western Europe. The project “Yamal” has entered the stage of search of sources of financing. He came to the aid of banks from the Old continent who decided to lend the whole enterprise with the creation of consortia. The funds were to go for the purchase of pipes. In addition, some companies signed contracts to purchase gas. Despite the fact that the Americans continued to expand sanctions, thanks to the tenacity of the German gas pipeline “Yamal-Europe” have managed to build.

“Time is a flat round disk. Everything we have done or will do, we will repeat again and again forever”, — said the hero of the popular television series ‘True detective’ Rustin cohle. His philosophy, in which history is presented the scheme with repeating elements, as shown by the comparison of the Chronicles of the creation of “Yamal” and the project “Northern stream — 2”, to apply to the issue of construction of gas pipelines between Russia and Western Europe.

Developments around the new pipeline has gained momentum after the European Commission asked the EU Council a mandate for negotiations with the Russian Federation about the basic principles of the implementation of the project “Northern stream — 2”. The European Commission wants to make its operation took place within the framework of the special legal regime that strikes at the interests of Warsaw.

Against the grant of the European Commission mandate made Germany. Chancellor Angela Merkel said that, although some of the legal aspects of the Russian project really need to clarify that this initiative is purely economic and not political in nature. Merkel’s words do not mean that she opposes special legal regime; rather, it tried to hush up the subject of the mandate, which can be used (although only in theory) against Germany.

The project “Northern stream — 2” provides for the construction of two branches of the gas pipeline from Russia to Germany under the Baltic sea bypassing transit countries. The gas pipeline with a total capacity of 55 billion cubic meters of gas per year is planned to start in 2019. Venture firms from the European Union (Shell, Wintershall, Engie, Uniper, OMV) and the Russian Gazprom. The countries of Central Europe, including Poland, have criticized the project. The Polish government considers him a threat to the political and energy independence of the EU, as well as the security of its individual members. Debate is also the fact of implementation of such a major infrastructure project at a time when anti-Russia sanctions are imposed for the attack on Ukraine.

On a sequential approach to the policy of the Kremlin reacted on the other side of the Atlantic ocean. The U.S. Senate unanimously approved new sanctions against Moscow. They are designed to punish the government of Vladimir Putin for the annexation of the Crimea, interference in the American presidential election and the Syrian civil war. In addition, they are directed against companies that participate in the project “Northern stream — 2”: the U.S. Treasury Department will be able to punish those firms that have made this company a significant financial contribution.

Against us sanctions were the leaders of Austria and Germany. German foreign Minister and the Austrian Chancellor made a joint statement in which they stressed that these measures threaten “the imposition of illegal restrictions” against European companies involved in the Russian project. They also stressed that the initiative “will have a negative impact on us-European relations.” Both politicians believe that the US sanctions have weakened the “coordinated position”, which the Nations of Europe and Washington took on the issue of conflict in Ukraine. At the same time they accused the Americans that use the conflict between Moscow and Kiev to promote the interests of private energy companies that can supply gas to Europe.

For Germany “Nord stream — 2” is an opportunity to get cheap fuel for further economic development. The demand for gas will grow as the implementation of the German plan to reduce emissions and the abandonment of nuclear energy and coal. How important is the project, shows the active financial participation of Western European companies who are trying by any means to circumvent the strict European legislation. The Dutch-British Shell, German Wintershall and Uniper, Engie French and Austrian OMV has transferred to Gazprom-owned Nord Stream AG 2 AG for EUR 950 million. Thus, the Western partners of the Russian company will Finance 50% of the total project cost, which is estimated at 9.5 billion euros. The remaining part will be paid by Gazprom.

The similarities between the stories of gas pipelines “Yamal-Europe and Nord stream — 2” is obvious. In both situations, the main argument of opponents of these projects is to ensure that Western European countries are increasing their reliance on supplies from Russia, and this entails geopolitical implications. Since 1981, the world had to go through a political metamorphosis, but the interests of great powers and, apparently, remained the same: Russia is committed to political and energy relations with the West, Germany needs optimum fuel for its economy, and the U.S. is trying to maintain its position on the Old continent, forcing him Moscow and trying to influence Berlin.

You should also note that all this is happening parallel to the events in those countries that are directly associated with the construction of gas pipelines (Poland in 1981 and Ukraine now). It’s hard not to see the similarities in the actions of the US, which (in both cases with a strong influence of the Republicans) inflict its sanctions impact on Russian and European companies, in particular the pressure on Germany. Germany’s attitude towards the current situation also changed, especially in the power summit: German manual in both cases makes clear that the controversial pipeline should be built. Is this enough similarities to the “Nord stream — 2” repeat the fate of “Yamal”?

Virtually all says that, Yes. Almost. After all, the “Yamal-Europe” was for the United States is mainly a political impact. But “Nord stream — 2” threatens to undermine American plans to supply excess gas to the European market. By 2020, Americans will begin to produce 100 billion cubic meters of natural gas more than we need them. It has to go to Europe in liquefied form. It is in these plans of the United States lies almost the only chance that the construction of the underwater gas pipeline will be blocked. Will America bend “time drive” and prevent a repetition of the situation from the past? This will show inexorably running time.