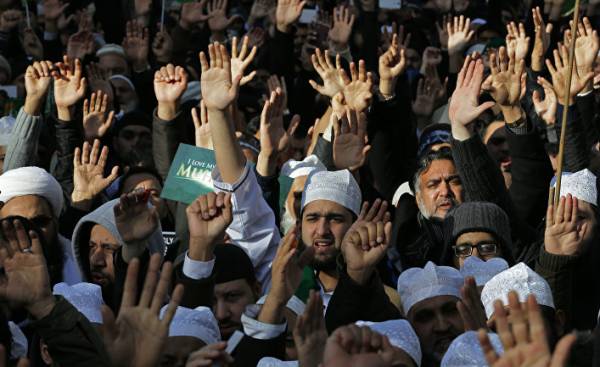 Unfortunately, in the UK continues to be attack using a car or a knife, which end with death. The last of these attacks took place again in London on the night of Sunday to Monday. As a result the Muslims were again subjected to Islamophobia, hatred and revenge.

This may not be the last attack. In recent years, after the acts of violence observed in Western capitals and major cities, the West became acquainted with terror. Earlier there was a perceived terror as a primitive and the horror inherent exclusively to the East, lightly contemplated and as nonchalantly comment on what is happening. They’ve invented these “false notions” as “Islamophobia” and “Islamic terror”, not refraining from insults almost two billion Muslims.

It seemed that the terror will always be somewhere far and never touch themselves. What it is not, it became clear very sad way. We wish Christian the Western world has learned lessons from what happened to him.

The latest attack in London has shown that the plague called “terrorism” that has tormented humanity, all is not yet comprehended in its fullness and integrity. If in the course of this vile attack, the assailant was a Muslim and killed a Christian, then it would be a different process, different assessment, different results.

According to eyewitnesses, the unfortunate incident occurred.

In the mosque in Finsbury Park just ended the night prayer; the congregation were leaving the mosque. Noticing that one elderly man it became bad with heart, a group of parishioners emerged from the mosque, rushed to help him. Somebody started to do CPR. At this point, the attacker-a Brit who, as it turned out, was 48 years, sent a van into a crowd of Muslims on the sidewalk, causing injuries of different severity. Then the perpetrator came out of the van, attacked a crowd of people shouting: “I will kill all Muslims!” He was disarmed and held until police arrived. From this moment, lets know the mentality associated with the separation of “your” — “alien”.

— Police and ambulance are late.

— The police are not just delayed, but instead immediately arrest and deliver to the site the attacker, it keep for a long time at the scene. This delay, according to those who were there, as if they were asking for a lynching.

— Police and authorities do not call the attack a terrorist attack, and even in a strange way, there is such a false rumor as “traffic accident”.

— Even worse, some Western TV channels, feeding the news at first as “emergency message” was informed that the attack was committed by Muslims. Because it’s a subconscious reflex born of prejudice. If an attack, the guilty Muslim! Though soon the message was corrected, arrows of hate have already been released.

You also need to pay attention to the fact that even when in that awful moment of “one person was killed and ten people were injured,” no one said, “Christian terror”. And well, I haven’t said. To ascribe the terror of Christianity and all Christians, of course, would be unfair. But the same injustice even today has a place in relation to Islam and Muslims, at least at the level of perception management.

The first reports about the attack on London bridge this month, as soon as it became aware of it, the incident was immediately named “terror”. The term “traffic accident” in relation to the attack on Muslims coming out of mosque in Finsbury Park after a night of prayer refused, but not qualified the incident as “terrorist attack”.

Official statement consists of one sentence:

The consequence will to conduct the anti-terrorist unit!

Do not be surprised if after some time there will be a report on “violent outburst tronuvshegosya mind a British citizen”.