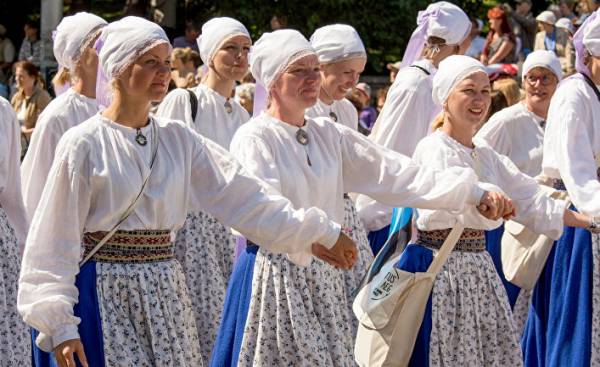 I was born in the Finnish-Estonian family, and my world was divided by the iron curtain into two parts: the Northern Finland and Soviet Estonia, on the Western and Eastern policy of beauty.

Both sides have their own history, the trail of which is still largely visible. For example, that Finnish women buy less shoes than other European women, despite the range of temperatures in different seasons. In Estonia women, in turn, aim to make shelves with shoes, regardless of whether they have currently money. In Tallinn, the Estonian capital, more Shoe stores than in the larger Helsinki, capital of Finland.

When in 1944 the Soviet Union launched a second occupation of Estonia, the country was visited by hundreds of thousands of new residents. This was the policy of the migration of peoples to Stalin, which was to weaken the national consciousness of the indigenous population, diluting its visitors.

The clash of cultures is given concrete expression in the Estonian nightgowns wives of officers of the red Army took them for evening wear and wore to the dances and walks. This is very amused Estonians, but it was laughter through tears: it was then that the Estonians decided to pay special attention to your appearance, despite the political situation in the country and the world.

This applies to home improvement: compliance with the Estonian aesthetics fulfilled the role of this resistance — the only possible resistance, as the armed rebellion was suppressed, and national symbols were forbidden.

The Soviet government engaged in the creation of the Soviet man — homo soveticus — including the formation of its appearance. So there was a non-sexual image of Soviet women: the mythical mother of the heroine or the milkmaids in a head scarf. In the Soviet way none of the characteristics of Western femininity, because they were seen as desperate attempts to please the men, served as a reminder of prostitutes and inequality.

Since the forced Sovietization came the women of the occupied Baltic States to their liking, demonstrative femininity became a silent protest, a rebellion against the ideals imposed by the Soviet Union.

In the days of my childhood spent in Soviet Estonia, skirts were short. Lips painted bright red because other colors were not on sale. For the same reason, was especially popular eyeshadow colors are “electric”.

The presence of consumer culture in advertising existed without the Soviet Empire was impossible, and in order to maintain a feminine image, was required ingenuity and resourcefulness. Almost every woman she knew how to sew clothes.

Perhaps that is why these signs of femininity, which in Finland was considered as a indication of vanity, for me, was something else.

The situation in Finland was quite different, and the country had a wide choice of Western goods. Finland crossed the poverty after the Second world war, to democracy, the Nordic countries developed in the direction of equality.

If earlier the socio-economic situation of the woman and her unmarried female relatives depended on a good marriage, and external data was very important, after the war the participation of women in working life has changed the situation. Erasing differences between the sexes meant freedom and independence, and the income of the woman depended on her skills.

Still prevailing in Finland is a craving for practical clothes tied to ideals of equality and the fact that the main advantage of the Finnish women — it’s her job. Beautiful clothes speaks of frivolity, femininity, which calls into question her professional competence.

In the USSR, in turn, was full employment, and workplace not had to fight. It stood out to everyone, and especially the desired location can be obtained by using relations. Getting a job did not depend on sex or the like if the person on the tractor with the propaganda posters. The career was primarily associated with political views.

Therefore, the attitude to work in Soviet Estonia and Finland have differed, but the most common clothes, familiar to Estonia, it seemed to Northern Europe is too feminine, and morally questionable. High heels and short skirts were in Finland attributes of the women of easy virtue. Long skirts and dresses, in turn, was considered to be very festive for everyday life.

My mother sewed, like all Estonian women, and so I had a lot of clothes that she made herself. In Finnish kindergarten, however, we were told to dress in “casual dress” on ordinary days, and not “festive”. So my appearance, due to the difficult economic situation, it seemed the Finnish school system dandified. And in fact, immigrant family faced a common problem: we couldn’t afford to buy clothes in the Finnish shops.

If in Finland, the equality — still a great value, protection of which seems to be something natural, modern Estonia is a different situation. Western feminism of the 1960s has taken root only in countries that were on the other side of the iron curtain. Using propaganda, the Soviet Union declared itself as a country where equality is valued, but everyone knew it was wrong. Therefore, this word has a bad taste, which is felt until now.

I realized that the concept of beauty, importance, and appropriateness depend on the culture and history. Finn condemn heels and short skirts Estonian women and Finnish men look at the same parts of the Estonian style, with lust. It’s like ethnic sexualization and does not allow me to share the ideals of the Finnish practicality. It seems that the Finns are trying to emphasize with modesty, its importance.

In the Western beauty industry of the XXI century particularly emphasizes the ideals of naturalness and health in Estonia and in Finland — but whether modern ideas of beauty really natural and healthy? Why women have to mask beauty treatments, health benefits and the need to “match”, as they say in Finland?

The status symbols of the highest class after the French revolution, for example, tight corsets, for the time was rejected, and the figure formed by them was considered unnatural, because of what the shape of the corset was later changed. As can be seen in portraits of the time, natural was relative and time dependent concept. “Naturalness” is very different in the eyes of different generations.

Corset, the inconvenience of which in our days seems to be something terrible, has not disappeared. He only turned into a “muscular corset” and suggests the same as the corsets of the eighteenth century, which forced the aristocrats to walk with a straight back: “a muscular corset” talks about high morality and self-discipline. Weak muscles — a sign of a weak character.

The news of the XXI century often slip headlines about women heroines, the waist of which remained as slim as before the birth of the child: the perfect woman triumphs over nature by means of his perseverance and at the same time remained sterile.

Ideal health is associated with youth. Thanks to technological advances, now can stay young longer. However, it was not always so. Not long ago, a woman who has become an elderly lady, supposed to look your age, and respectability, testifying the wealth, was not considered something bad.

Now, however, gray hair does not enjoy the popularity. It is believed that by its color, structure and splendor of a woman’s hair should be like in your youth. Not surprisingly, the beauty market now is popular.

Whereas previously, women with low incomes were made in the dim light of the lamps, corsets and wigs for women of the upper class, but now women from poor countries to sell their hair for a couple of dollars in Western countries. Ideals of beauty make a fake beauty real and natural, and therefore, for the procedure of hair extensions often come from human hair, although you can use artificial.

All of this suggests not only that the desire to look healthier person is hidden vanity. According to numerous studies, pretty girls get jobs easier than unsympathetic. The pursuit of beauty that meets the standards became a strong influence on the welfare of women and turned into a third job that requires time, money and nerves — after house work and real work.

A world that is becoming more focused on visual aspects, alleges their ideals, and new generations tend to gather more likes in social networks. The success of girls in society greatly depends on how it looks, not his skills.

Equality “does not lose its positions,” in speeches of the American President in Russia, where the traditional roles only strengthened, but domestic violence has become a normal phenomenon and on the legal level. Like, for example, in Poland, where women have to fight in court for his own body.

Equality lost its position everywhere, where the most popular Newspapers are the news, photos of Actresses Hollywood, in which everyone is ready to fall in love. Aging women has become alarming news scandal, and in this world there is nothing natural or healthy. Therefore, I believe that the desire for “naturalness” is hypocrisy, and nothing more.

Myśl Polska (Poland): the April statement of the two presidents