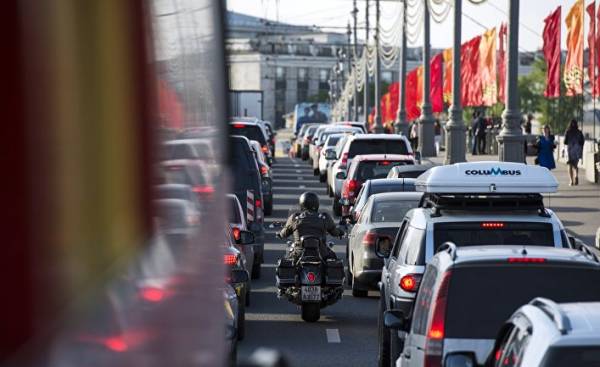 If you are going to visit Russia, you need to prepare for some of its features. They speak a different language, there is a different culture and traditions. Even the climate in many regions is much more severe than on the Rhine or the Elbe. But one of the main challenges for “aliens” from Europe will be, perhaps, traffic in Moscow. It is not so much about the rules of the road, but about their interpretation by drivers and on traffic density.

Not to say that in Moscow car in recalculation per capita more than Europe — rather the contrary. But, unfortunately, the road network is too poorly developed for the city, which officially only live about 12 million people, and unofficially a lot more. Only in some Asian Metropolitan areas the street network is a smaller proportion of the total area of the city than in Moscow. Thus, there is nothing surprising in the fact that the city for the past many years suffering from huge congestion.

Especially in “rush hours” to drive on the highways leading into the city or out of town, absolutely impossible. And then the next push in tube “killed” “the Muscovite” and newcomer “Mercedes”. And if someone Friday night is going to go to the country, he will need a lot of time and a lot of patience.

In traffic anyway — only the high-ranking officials and oligarchs with “flashing lights” on the roof “more equal” all others. They blatantly “cut” of travel in your lane. After some fatal accidents that caused a great resonance in society, it came to the mass protests, and many Russian motorists have installed on the roofs of their cars baby blue bucket in protest against this tyranny on the roads. However, the situation almost has not changed.

Last year in Russia in road accident were lost more than 20 thousand people is less than in 2015, but as much as six times more than in Germany. This is partly due to the riding style of Russian, and not only those who ride with flashing lights. I with a slight shudder to recall their drive on illegal taxis in Moscow at night a few years ago, when the driver is”bombed” broken-down “Lada” raced through the city as if running away from the chase.

Seeing my unsuccessful attempt to buckle up, he snorted and nodded at the icons that are installed on the instrument panel. In Russia many drivers still believe in the protection of the images of Jesus, Mary and St. Nicholas, the patron Saint of travelers, rather than in the belt and the airbag. When my driver decided to stop at a red light, to the right of us whizzed some other Lada. “Like he’s in Kabul,” commented my driver, an Armenian style of riding of his fellow racer.

Because usually Russian drivers in a hurry more neighbors with the flow of the game in the “abhorence” and honking horns on the streets of Russian cities are very frequent. At the traffic lights everyone should have time to slip through the intersection on an orange light, and then all surprised that the movement is paralyzed by congestion. If someone stops at the traffic lights before the “stop line” in front of him right be sure to squeeze at least one more machine to get up first. To argue in such cases is useless, and sometimes dangerous if driving the other machine sits some hot Caucasian.

Outside of the Russian capital road signs also have a more “Advisory” in nature. Most often the permitted maximum speed on Russian roads is 90 km/h But drivers who adhere to this regulation, are considered a hindrance to movement. Even hung in many places surveillance cameras do not record the speed limit by 15-20 km/h. in addition, applications for navigation devices have a handy feature radar warnings, and drivers when approaching them dropping speed.

Another feature of the road “in Russian,” is the universal drive in the left lane. No matter day or night, but you will always see at least one (usually much more) of a driver traveling in the left lane although the right lane in front of him is unoccupied. Resourceful Russians know what to do: of course, outrun the slug on the right. If the traffic is dense, many such cases go like skiing the slalom.

Bad example, as they say, is contagious, and risky driving style becomes characteristic not only Russian. So, his most dangerous trip to Russia I made with one German, are on a bumpy road between Petersburg and Moscow pushed the pedal to the metal, oblivious to the fact that passengers at each pothole jumped up and risked to hit their head on the ceiling. At the same time around the cabin quietly walked two cats, but the driver only slightly moved his leg, when they prevented him from pressing on the pedals.

At the entrance to Moscow when the three-lane road has become a bit crowded, started slalom: the driver found two new bands, including one in the opposite direction — in spite of the double solid dividing line. The second additional band showed up on nepasterizirovannym the side, moving along which he skillfully went round lampposts.

Closer to the end of the trip the driver had to slow down because the brake pedal began to falter. In the end, to Moscow we got, having at our disposal only the “hammer”. Offer to take me home I graciously declined and went out at the first metro station, met us on the road. Although the metro too, usually overcrowded, in Moscow it remains the most reliable of all modes of transport.