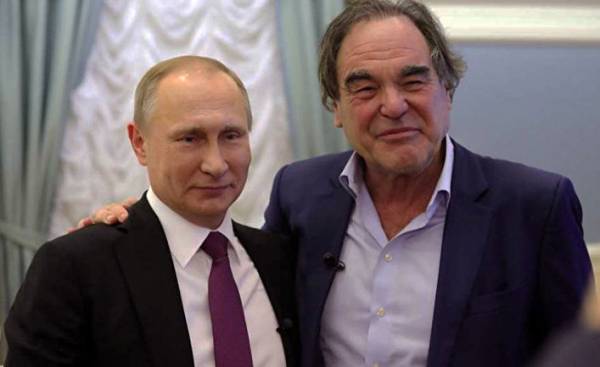 Over 30 years of his directorial career, Oliver stone has gained reputation as a political provocateur. In their artistic and documentary films, he offers the viewer an unorthodox narrative about the assassination of John F. Kennedy and the presidency of Richard Nixon, as well as a very humane shows foreign leaders, including Fidel Castro and Hugo Chavez.

Due to the readiness of the stone to contradict the accepted narrative lines about American history someone enrolled him in the ranks of the conspiracy theorists. His next project was the documentary “Putin” (or “Interview with Putin”), and it seems that from the very beginning it was destined to cause a scandal and controversial.

In this painting of four parts, which show which starts on Monday and the shoot was conducted over two years, stone spends with the Russian President Vladimir Putin more than a dozen conversations. The topic of conversation of all kinds, starting with “Dr. Strangelove” and Russia’s attitude towards LGBT rights, and ending with Putin’s love for judo.

Oh, and this story is about a hacker attack on the elections.

At a time when the country’s attention riveted to the unfolding Saga with Russian, “Putin” was a great advantage to stone and Showtime, who spends a lot of time documentaries on political topics.

(For comparison, the widely publicized interview Megyn Kelly with Putin, shown on June 4 on NBC, lasted less than 10 minutes.)

Perhaps someone was hoping the series of interviews with Putin will result in a tough and tense standoff, especially when you consider the title of the film, which stone is deliberately made similar to the picture of David frost’s Watergate times “Interview with Nixon”. But the purpose of the stone was to understand the interlocutor, and not roast it on the fire.

“My role was to meet him and ask him to explain how he sees the world and thinks, — stone said by phone. — Listening to him, we can disagree, but it is important for us to listen to him.”

The idea of this project appeared during the creative journeys stone in Moscow for the filming of the movie about a former NSA employee and whistleblower Edward Snowden, which came out in 2016. The Director met with Putin to discuss the Snowden story, and this meeting resulted in a series of taped interviews lasting 20 hours, the shooting of which ended in February.

“There were no forbidden questions, no one asked to see questions in advance. Everything was completely under our control,” said stone, who shot the picture with his longtime colleague and producer Fernando Sulayem (Fernando Sulichin).

Responding to a question about why Putin is rarely seen with Western reporters, agreed to participate in the film, stone explained, “He knew who I was. I’m sure the movie “Platoon” has made a considerable impression there. As “John F. Kennedy. Shots in Dallas””. He also pointed to his long documentary of 12 parts of “the Untold history of the United States” with its critical evaluation of American involvement in world war II and the cold war.

New film stone, this is the second case of his collaboration with Showtime after “Untold U.S. history” (The Untold History). This is another very timely pattern in a series of films popular cable TV channel. President and General Director of TV channel David Nevins (David Nevins) as a priority, shows political programs, giving the viewer a rare opportunity to meet interesting people.

Strange and very unusual story about elections in 2016 can be seen in documentaries of this channel, starting with the favorite of the festival “Sundance” film “Wiener”, which tells about the prone to scandals politics Anthony Weiner (Anthony Weiner) and his wife, the helpmate Hillary Clinton hum Abedin (Huma Abedin). Another was “the Circus” (The Circus) Brand Halperin (Mark Halperin) and John Heilmann (John Heilemann), which allowed us to look at the presidential race from behind the scenes; and now came “the White house trump”. In July, the channel will premiere of the film “Risk” (Risk) Laura Poitras (Laura Poitras), painted a critical portrait of WikiLeaks founder Julian Assange.

“People want to understand, and I think what we give them, gives hope for a deeper understanding of what is happening, something that provide news on cable television,” says Nevins. He adds that the filming of the documentary is exactly the same as shooting films with scripts — starting with the hero and his personality.

“What would we say about political views of Oliver, says Nevins, is it allows Putin to speak for themselves, and gives us the opportunity to make their judgments”.

The stone image of Putin appears to us as a shrewd, sober, and very disciplined leader, although it has an element of self-promotion when he let a few obscene jokes about showering with gay men and the menstrual cycles in women. (He was also very witty remarks, for example, when stone gave him a DVD with the recording of “Doctor Strangelove” and Putin found that the box is empty. “Typically American gift,” he said.)

In two episodes made available for media, stone raises a very difficult and painful topic, say, about the situation with LGBT rights in Russia. But he also puts forward the argument that the United States and its European allies are partly to blame themselves for the deterioration of relations with Russia. Stone argues that Putin, who is accused of killing opponents, the Western media are trying to unjustly discredit.

And he insists. “Even Hitler was more popular,” says the Director.

Stone is also very skeptical about the allegations of Russian interference in the elections. Last year, he said Amanpour (Christiane Amanpour) from CNN that a hacker attack on the national Committee of the Democratic party was a “great fiction,” and suggested that it was “his handiwork”. Speaking of social networks, he criticizes the Washington Post and the New York Times reports “in a stagnant spirit of the cold war… in which the Russian accused of almost everything.” (His son Sean stone (Sean Stone) leads the program in Russia Today.)

Stone said that his goal is to give a historical perspective to “no big deal hacker hacks”. “I think this happens in America, but at the moment we are chasing behind the scandalous headlines. This is today’s tyranny,” said the Director.

Although some critics believe that the new star of NBC Kelly conducted a strong interview with Putin, stone believes that she made a mistake, “setting him hostile relations. If I had done that with Putin, our conversations would not last long. With his character it is necessary to establish a relationship and form trust-based atmosphere. I was there not to show how awesome I am. It has not given me anything.”

Some claim that stone is that he is an apologist for Putin. Marlow stern (Marlow Stern) said in the pages of the Daily Beast, that the Director of “sucking up to dictators” and engaged in “a celebration of heroes.”

“I just love dictators, it really is, he said with a sarcastic smile. — Damn it, I like the world. I like when the world is in harmony. I think the US and Russia can become great partners… Why the situation has deteriorated to such an extent?”