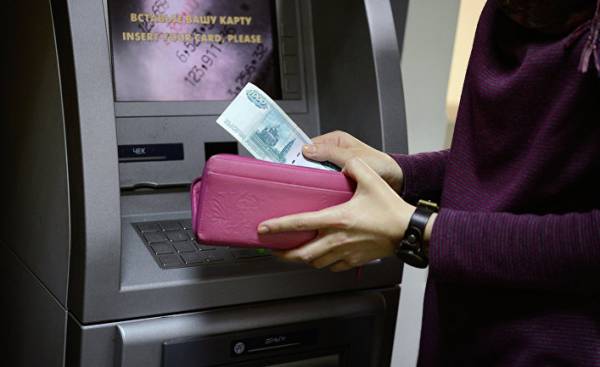 Russia no longer wants the ruble acted as an oil currency.

This year was introduced a fiscal mechanism whereby the government takes additional income when oil costs more than $ 40 per barrel. According to Deputy Finance Minister Vladimir Kolycheva, this measure marks a “change in ideology” and a departure from the previous mechanism to ensure the stability of the budget. Given the fact that the Central Bank allows the market to determine the exchange rate, the introduction of the new rules the main objective becomes the liberation of the ruble from oil, said Kolychev, giving Moscow an interview.

“This is an important change in fiscal policy, said 33-year-old Kolychev, who two years ago went to work in the Ministry of Finance from the Bank VTB Capital. It is especially important with a free floating exchange rate when there is no artificial containment of the ruble.”

This change is one of the most far-reaching attempts of Russia to withdraw its economy from dependence on energy and to protect the currency from the UPS and downs of oil prices, because they eat up the finances of the state and the citizens. Although Russia and OPEC have joined forces in order to stabilize oil prices, Kolychev said that the price may again fall below $ 40 per barrel and the equilibrium price in the next 5-7 years will amount to from 40 to 50 dollars.

“The deal between the producers regarding the time limits of extraction will help to eliminate excess oil reserves, he said. — However, it is difficult to say whether the restored balance of demand and supply in the market at the time of expiry of this agreement.”

While the decline in commodity prices affected the economies of all oil-producing countries, their reaction was different from each other. For example, Saudi Arabia, the dominant OPEC, promoting his plan for a post-oil era, the reduction of subsidies and new taxes, as well as the conversion of its sovereign wealth Fund in the world’s largest. Russia, the world’s largest exporter of energy resources, has maintained its strict financial and monetary policies, focusing on trying to unlock domestic investment due to curb inflation and encourage savings.

To compensate for the volatility

In addition, rising interest rates make Russian assets are very attractive to investors. For four months, when the Ministry of Finance conducted operations on buying foreign currency for a total amount of 262 billion rubles ($4.6 billion), the ruble continued its growth, gaining over a specified period of three percent. The Central Bank explained its strengthening in the first quarter, the sale of foreign currency by exporters and large tax contributions and not his attraction for currency speculation.

According to Kolycheva, if the economy is to experience any “significant changes”, the possible fluctuations of the ruble as “a significant influx of capital” from the beginning of the year shifted the exchange rate from its “equilibrium value”.

“We must observe the budget rule, if you don’t want the exchange rate, interest rates and the price structure was jumping up and down, he said. Now, we not just collect revenue, but also protect the domestic market from the volatility of oil prices”.

Officials believe that Russia has found the budget decision to control the economy in both good times and bad. If oil prices fall below $ 40 per barrel for a long time, the government can use its reserve Fund to cover the deficit, said Kolychev. But if the sovereign reserves will be reduced to five percent of the gross domestic product (GDP), the expenditure of these funds will be limited to one percent of output per year, while the rest of the shortfall will be covered by borrowing or reducing the non-oil deficit.

The Ministry of Finance predicts that the budget deficit will shrink this year to 2.1% from 3.7% in 2016, and it will happen at the expense of revenue growth that can lead to unexpected profit of more than one trillion rubles. Energy accounts for more than 40% of revenues.

However, the peg of the ruble to the oil proved to be very durable. His thirty-day correlation with Brent price is now close to 0,6 compared with 0.2 to 7 February, when it started buying. A value of 1 would mean that the assets move in a tight connection with the price of oil.

According to Kolycheva, the authorities stick to the formula that is used for “mechanical” calculation of the volume of the monthly transactions on the foreign exchange market, that is, there is no freedom of maneuver in respect of funds collected by the Ministry of Finance.

“Only through strict adherence to the rules transparent to all market participants, it is possible to strengthen the necessary trust, — said Kolychev. — Success in reducing the economy’s dependence on oil will create a solid Foundation for its diversification.”