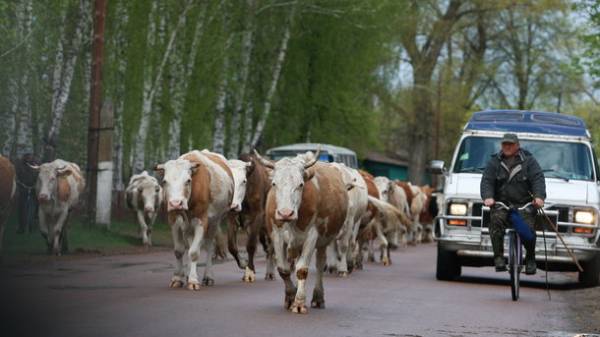 Ukraine is rapidly losing dairy and beef herd. Since 1991, according to the Ukrainian state statistics service, the number of cattle has decreased by almost seven times from 24 million to 3 million head. A similar pattern for small ruminants (sheep and goats) and pigs. But the rise in poultry the number of birds decreased only after 2014, when the Ukraine because of the aggression of the Russian Federation lost a large poultry farm in the Donbas. Agroexpert say that the repeated reduction in livestock objectively and is associated with the collapse of the Soviet Union, where we have supplied more than 75% of the produced meat, dairy and eggs. But admit the herd, especially cattle, will continue to “lose weight”. And that means — to rise the price of beef.

I HAVE. As you can see from the infographic, in Ukraine a quarter of a century of cows was four times less, pigs three times, sheep and goats — six times. But chicken eggs, per capita — more than 20%. “Until 1991, Ukraine was supplying livestock products to other Soviet republics and the countries of the socialist bloc after the collapse of the Union market decreased, the planned economy was gradually replaced by the market, hence the drop in times, analyzes the former Cabinet Secretary in the 90-ies of the Victor Lissitzky. Now other trends — economic, due to expensive fodder, the production of beef is much more expensive than pork and poultry”. According to his estimates, due to the fact that cows and pigs continues to decrease, the amount produced this year alone meat will decrease by 1-1,5%, or 25-40 thousand tons Agroehkspert Ukrainian agrarian Confederation Dmitry Dane noted that the decrease in population was accelerated after the events of 2013. “Purchasing power has fallen sharply, in the end the number of cows decreased by 20%, pork 15%. The second factor is the state has cut subsidies to livestock farmers, it is no secret that these industries unprofitable. And the third appeared in Ukraine in the last 3-4 years of African swine fever”, — analyzed the Dane. 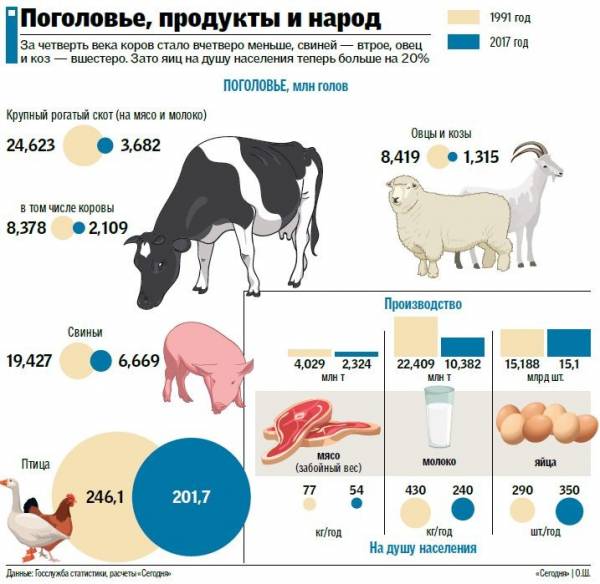 PROSPECTS. Director of the Ukrainian Association of trade networks suppliers Oleksiy Doroshenko estimated that the money invested in the breeding of dairy herds (100 animals), including fattening calves for meat, pays for itself in only 8 years, but, for example, in poultry production in 2-3 years. “So we will continue to become less cows and more poultry, which, unlike pork and beef, is not only cheaper, but also has a much larger market in Ukraine and abroad, — said Doroshenko. — It is pure Economics. As for the sixfold drop in a quarter century the number of sheep and goats, they are 25-30 years ago, bred primarily for the provision of light industry wool and lamb and goat went to the markets as a secondary product. When our light industry almost died, did not need the herd. But now in the small private farms is reviving the sheep and goats. Animals bred for the production of goat and sheep milk and the manufacture of cheese increasingly demand.”

What will happen to prices in the summer months

It is obvious that the reduction in the number of cattle and pigs affected the volume of meat production, but according to experts, people it will be enough remains due to further growth in chicken production. According to state Statistics, the volume of meat produced in the year fell by 73% — from 4 million tons per year in 1991 to 2.3 million tons in 2016. Or from 77 to 54 kg per year per capita.

Even worse is the situation with milk — was 430 kg per consumer per year, and became 240 lbs. But eggs now account for every a lot more: not 290 units a year, and 350. “That explains why prices are rising on meat and milk — offer less, and their cost due to the cost of feed, energy, growth of salaries of all the above — said Doroshenko. — Beef and pork will continue to gradually go up from 1 to 5 UAH for 1 kg per month, depending on the variety. Eggs will also go up by 1-2 UAH”. But the President Ukranalittsentra Alexander Ohrimenko predicts that in summer, meat prices will drop a little: “of pork will fall by 2-5 UAH/kg. will Definitely drop fat, about a third (15-20 UAH/kg), as the demand for heat drops.”