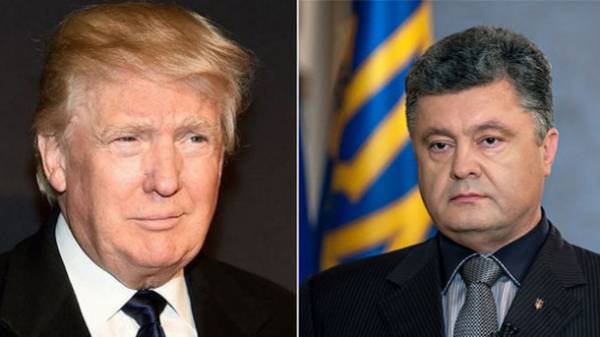 The failure of the visit of the President of Ukraine Petro Poroshenko in Washington to meet with his American counterpart Donald trump is connected only with internal problems in the White house. Told about it in interview to “Today,” the Deputy head of the presidential Administration Konstantin Eliseev.

According to him, the main reason for the failure of the visit Poroshenko in Washington to meet Trump’s problems in the personnel policy of the White house.

“Indeed, we offered dates in late February. But, as you know, at that time there were some difficult HR processes in the new Administration. At that time, unfortunately, was not yet occupied key positions in the new us Administration, state Department, national security Council. So there are some objective reasons for the lack of specific dates. Secondly, we, of course, interested in substantive visit, not a visit for a visit. Therefore, in addition to dates we would like to form a concrete agenda in order to reach certain agreements. In the near future we plan to continue contacts at the highest level for the harmonization of such agreements”, – said Elisha.

He noted that through the recent visits of foreign Minister of Ukraine Pavlo Klimkin to Washington, and Deputy Secretary of state of the USA Bridget brink in Ukraine prepared the ground for the meeting of the presidents.

“I want to reiterate: the summit will take place as soon as two parties agree on the agenda and content for future meetings. Of course, we would like that to happen as quickly as possible,” – said Elisha.

We will remind, in January, the Ambassador of Ukraine to the United States Valeriy Chaly said that the first meeting of the President of Ukraine Petro Poroshenko and U.S. President Donald trump may take place in the 20 days of February during the visit of the Ukrainian President to Washington.

Previously Konstantin Eliseev said that Ukraine will try to organize a meeting of Petro Poroshenko and Donald trump before the scheduled July meetings of the American leader with the President of Russia Vladimir Putin.

The full version of the interview. Konstantin Yeliseyev read here.