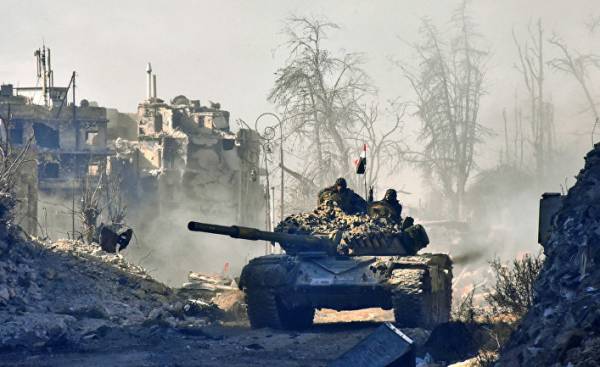 Russian and American forces met in the South of Syria, stretching along the border with Jordan to the Syrian-Iraqi-Jordanian triangle all the way to Deir ez-Zor and Raqqa: the Americans with its regional allies attempt to demarcate boundaries of Syria from the Golan heights in the South to the city of Hasaka in the North-East of the country. On the other hand Russian is much easier for the Iranians to establish control over the Iraqi-Syrian border for the liberation of the road “Tehran — Damascus — Beirut”. This is an important strategy for preserving the “Iranian of the bridge” in the heart of the Levant.

The results of this bloody race between the two main axes, and the nature of the Iranian presence in the region will determine the decision on settlement of the situation in Syria. Iran has a clear strategy to protect the regime of President Bashar al-Assad in Damascus, as well as in strengthening its influence in Syria and Lebanon, which are the first line of defense to Tehran, as evidenced by the size of Iranian investments in these countries. The emergence of new regional map thanks to the efforts of Iran requires drastic changes in US policy, which define the Iranian penetration into the Arab Mashriq, particularly in Syria, as threats to its national security.

The change in U.S. policy reflected in the ground support of a number of Syrian opposition factions, and to support them from the air operations of the International coalition against ISIS (ISIL banned in Russia — approx. ed.) in the South of Syria. In particular, an airstrike committed a few days ago, Iraqi and Lebanese Shiite militias supported by Tehran, which were sent to the base At-Tanta on the Jordanian-Syrian border. The new administration of U.S. President Donald trump is considering Iran as a full-fledged regional player. Because of the different points of view, the U.S. and Russia can’t come to a unified position on the Syrian crisis. The U.S. and Russia can resolve the situation in Syria only on condition of joint “custody” over the region. All of the regional players recede into the background, except Iran, playing in the forefront. Iran has not scored success in this war to the tipping point, when militias from Iraq and Lebanon came to Syria.

Americans know that Russia is not opposed to the expansion of American influence in southern Syria, where the Union of the States of Israel and Jordan. The reason for the extension of the war is the increase in the number of Iranians in Syria via Iraq “the forces of popular mobilization” in which the Russian need for a safe “exit strategy”. However, only the Americans are able to ensure the completion of the war. Therefore, the idea of the creation of the American Union zone in Syria on the ruins of ISIS is crumbling before our eyes. Possible transaction between USA and Russia will end the war in international terms, not regional. All players will return to their original location, because as soon as the hostages of the international game is able to end the conflict through the adoption of effective solutions.

Importantly, any regional group regardless of their power and strength is still unable to win the conflict in Syria, in the heart of the Arab world. And therefore, only the United States and Russia can make an effective decision to end the Syrian conflict!