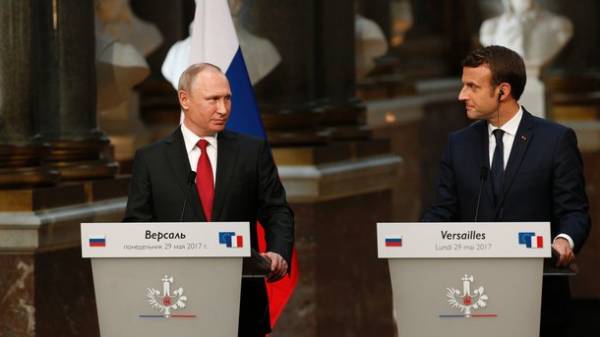 The President of Russia Vladimir Putin and President of France Emmanuel macron met for the first time after the official inauguration of the second. As experts predicted, serious agreements, this meeting did not bring. The leaders discussed bilateral relations, Syria and Ukraine.

The meeting of the two presidents was held in Versailles and lasted three hours. About the key things that were discussed during the talks, Putin and macron said during a joint press conference. 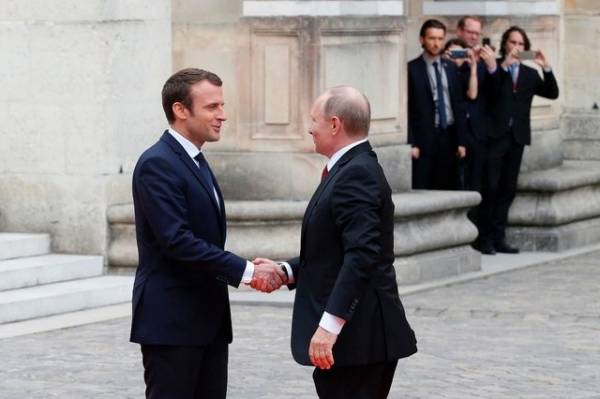 Him and Putin met in France. Photo: AFP

“We had a direct, Frank exchange of views. I fully said what I think President Putin. We share the differences. We see how to develop joint actions. If we don’t have an open, sincere dialogue, then we will have no progress either on the Ukrainian issue nor on the Syrian issue,” said macron after a meeting with Putin.

“Putin this visit was necessary, first, to talk through a wide range of issues of Russian-French relations. A lot of these issues. France and Russia have traditionally worked together, including in business – a large amount of investment, trade, contracts. Plus Syria is a very big topic. And of course Ukraine was not the first but probably the second most important topic after Syria and bilateral relations, – told the “Today” expert of the Ukrainian Institute of policy analysis and management Mr Will, Putin came to Express their point of view, Macron in regard to Syria, bilateral relations and the settlement of the Donbass”.

The macron stands for the meeting in “Norman format”

During a press conference after talks with Putin macron stated that relies on the Minsk process and the “Normandy format” as a way of de-escalation of the confrontation in the Donbass. He also noted that he wants to hold a new round of negotiations in “Norman format” with Germany and Ukraine to have a full analysis of the situation.

“Also, in the framework of the “Norman format” we must have a comprehensive report of the Special monitoring mission of the OSCE,” – said the President of France.

However, says Mr Will sharp remarks of Macron in Russia aimed at French voters, to show that he is tough, and that Putin’s visit to France does not make the Russian President his friend.

“However, the rules do not advocate breaking France’s relations with Russia, – said Will, – If he said that in case of escalation, the sanctions will be strengthened, this does not mean that he is a supporter of increased sanctions.”

The expert notes that now the world is changing geopolicheskih configuration, therefore, the position of France and the personal position of the Macron will be a certain evolution in the coming months. The same applies to Germany and EU as a whole, and all this somehow going to affect future relations between the EU, including France, Russia. 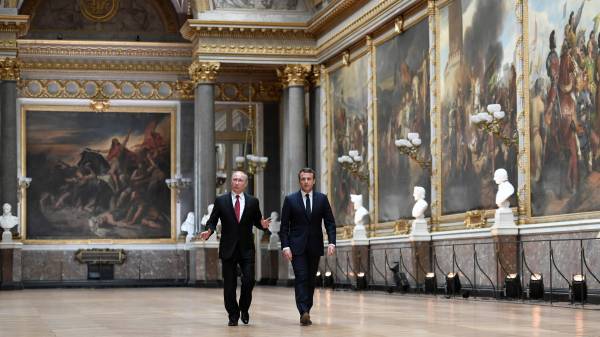 However, as the political scientist Vladimir Fesenko, this meeting is one of the indicators of the resumption of negotiations in the “Normandy format” – a personal contact between the two presidents indicates that there is a gradual return to that format. Thus, according to Mr Will, Putin may use his visit to France, saying to meet in the Normandy format at the highest level is not necessary if there is no progress or road map.

Following the meeting with Putin, macron said that he wants to strengthen cooperation with Russia to search for ways to establish peace in Syria. The French President said that reminded Putin about the French priorities concerning the fight against terrorism and eradication of terrorist groups, and in particular, the group “Islamic state”. In his opinion, States that are not able to maintain their existence in the middle East, are a threat to Western democracies.

Thus, according to Macron, he told Putin that the use of chemical weapons for France is “a very clear red line,” and its use will result in immediate response.

In addition, the French President said that he wants to share information on the situation in Syria to have a better understanding about what is happening in this country.

“In this regard, I want both our countries have strengthened cooperation with the desire of finding a long-term positive solutions to eradicate terrorism, which will bring peace in Syria,” said macron.

Another topic discussed by the leaders of Russia and France, were the theme of bilateral relations. However, following talks on the subject of the statements, they did not. According to Vladimir Fesenko, it happened because of the coordination of positions not even a hint. 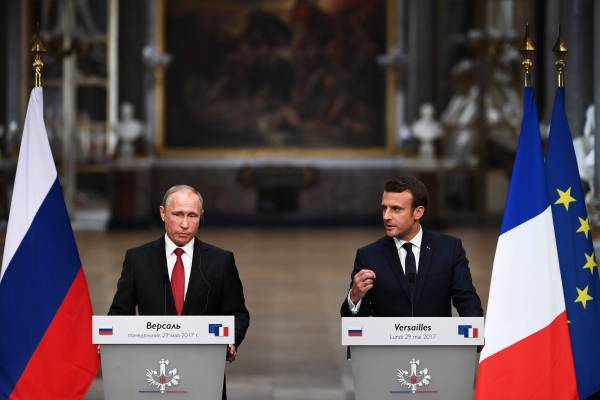 After the talks, the Makron and Putin held a press conference. Photo: AFP

However, significant outcomes of that meeting and could not be, because, as a rule, the first meeting between the two state leaders are introductory, and in their course, usually do not take the decisions, said Fesenko. From Putin, it was an attempt “to take the Makron in development”, and the French President, for his part, was to demonstrate that he is an independent leader who is willing to talk even with the politicians with whom he disagrees, but which are important for France, said Fesenko.

“Some of the negotiation outcomes, in addition to a personal acquaintance between the two presidents and symbols of their positions in the framework of this experience, the formation of personal impressions on their counterparts,” the expert says.